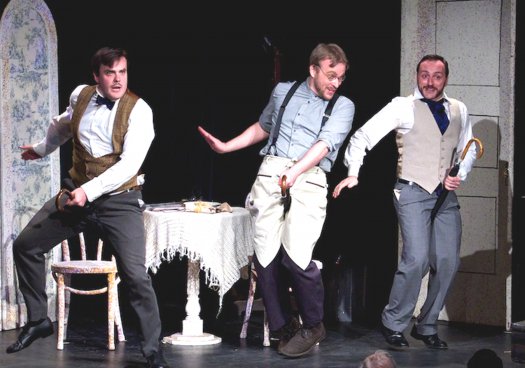 Sir Arthur Sullivan is best known for his large-scale satiric comic operas with Sir William S. Gilbert. However, he began his career with two one-act operettas that are rarely revived. The New York Gilbert & Sullivan Players began its 42nd season with the premiere of an unusual double bill of Sullivan’s first comic operetta, Cox and Box, written with F.C. Burnand, and his first success with Gilbert, the legal parody, Trial by Jury, both short works.

Introducing what he dubbed a pair of “Comedies of Crime,” NYGASP’s artistic director Albert Bergeret offered what he said was a first of a new series for the company: intimate performances of works by Sir Arthur Sullivan in the jewel box Marjorie S. Deane Little Theater performed to one piano, rather than to the usual full orchestra. In addition, the cast of Trial by Jury was comprised of the NYGASP’s Wand’ring Minstrels, a quintet of singers made up from the company, rather than using the full chorus, while the production of Cox and Box featured a newly edited version by singer/director David Macaluso. The new format for these delightfully entertaining productions had their advantages and disadvantages.

While the Gilbert & Sullivan operettas are regularly revived by various organizations, it was a real treat to see Cox and Box; or The Long-Lost Brothers which is not only rarely seen these days, it is an example of English operetta before the team revolutionized the form. It demonstrates how clever Gilbert’s witty lyrics are compared to the other writers of the time. Based on a one act farce by J. Maddison Morton, the musical version of Cox and Box was often paired with one of the full-length G&S operettas in a severely cut Savoy Theater edition. Macaluso’s version, a combination of the Savoy version and the original, cuts a good deal of the dialogue but retains all of the nine musical numbers. While musically complex, Burnand’s lyrics seemed very repetitious when compared with Gilbert’s sparkling equivalents.

Subtitled a “triumviretta,” Cox and Box concerns two men who unknowingly share the same room as Cox, a hatter, works by day and Box, a printer, works by night so that up until now neither man has ever suspected the ruse of their greedy landlord, Sergeant Bouncer. Unfortunately, on the occasion of the plot, Cox is given the day off as his office is closed. At first the two men miss each other in classic farcical style while each man attempts to cook a breakfast but finds the other’s food on the stove. However, they finally meet up and demand an explanation from Bouncer who offers them his little back second floor room. When the two men become friends and decide to both remain in the room, they discover that they have each been engaged to the same woman who neither of them wants to marry. Eventually all works out happily with the two men discovering that they are also long lost brothers.

Directed by the three performers themselves, Cox and Box in this abridged version is still a delicious romp. Bass-baritone Matthew Wages as Sergeant Bouncer, late of the Dampshire Yeomanry, who sings the martial “Rataplan” every chance he gets, demonstrates a tremendous vocal range. As the morose Cox, Macaluso has a rich baritone, while Daniel Greenwood as the expansive Box, reveals beautiful top notes. Among the memorable musical numbers are Greenwood’s parody lullaby, “Hush-a-bye, Bacon,” and Macaluso’s over-the-top aria, “My Master is Punctual.” Both excel in the duets, “The Buttercup,” “Not Long Ago” (also known as “Three Years Ago”) and the gambling duet, “Sixes!” All three men make beautiful music with the trios, “Who Are You, Sir?” and the finale, “My Hand upon It.” Elizabeth Hastings was the accomplished pianist at the unseen piano playing the sprightly score. 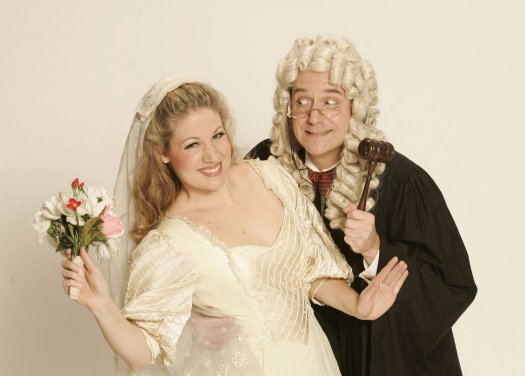 Trial by Jury is more widely known, though not staged as often as it might. A parody of the legal profession, it cleverly skewers courtroom cases, not surprisingly as Gilbert was a lawyer before he became a playwright. In this breach of promise case, Edwin has tired of his sweetheart, and fallen in love with another. His first fiancée, Angelina, hauls him into court. The beautiful Plaintiff turns the heads of all the men in the courtroom. Although the Judge and Usher admit to having behaved similarly when young, they have little sympathy for Edwin now. When his offer to marry both women is rejected, he pleads that Angelina is better off without him as he would beat her when drunk. When the judge offers to try an experiment to see what happens, the Council for the Plaintiff nixes that idea. Getting tired of all the objections, the Judge finally decides to marry Angelina himself.

The production directed and conducted by Bergeret is unusual in that all of the roles are played by the five singers, some of them playing more than one role, and all of them acting as members of the chorus which would usually be sung by others. This means that some of the plot and stage business had to be cut. The Counsel for the Plaintiff (played by alto Angela Christine Smith) doubled with The First Bridesmaid, while the Usher (Richard Holmes) also played the Foreman of the Jury.

While this takes some getting used to, the versatile cast is up to the task of playing these multiple roles. All five of the Wand’ring Minstrel singers are long time NYGASP regulars. After performing G&S roles for three decades, NYGASP regular Stephen Quint was retiring with these two performances as the Judge. His rendition of the patter song, “When I, Good Friends, was called to the bar,” was a model of diction and delivery. As both Usher and Foreman of the Jury, Holmes put his resonant baritone to good use. Blonde soprano Laurelyn Watson Chase made a beautiful Plaintiff dressed in an (uncredited) elegant white wedding gown. Her lovely coloratura was shown to excellent display, particularly in her aria, “I love him, I love him.”

Smith as the Lady Counsel for the Plaintiff demonstrated her rich alto and comic gifts. Cameron Smith as the caddish Defendant applied his solid tenor to such musical numbers as “When first my old, old love I knew” and “Oh, gentlemen, listen, I pray.” Pianist Andrea Stryker-Rodda was responsible for Sullivan’s lilting score which graces Gilbert’s droll and ingenious lyrics. The uncredited set (mainly white for Cox and Box, and brown wood for Trial by Jury) created entirely suitable environments, without getting in the way of the singers. As a special encore, NYGASP presented an Act III with “Impromptu Audience Requests” which lasted another 25 minutes.  All of  the eight singers returned to perform Gilbert & Sullivan favorites in various combinations chosen on the spot, demonstrating their wide range. A good time was had by all.

NYGASP’s experiment in chamber operas was a success particularly for being in the intimate venue of the Marjorie S. Dean Little Theatre. While it took some time getting used to the small cast doubling in various roles in Trial by Jury, Cox and Box still ran a full 55 minutes in this version which eliminated approximately half of the dialogue. Nevertheless, both were charming and delightful examples of Victorian musical theater. With this achievement by NYGASP, we should hopefully have a chance to experience other rarely performed small cast operettas.