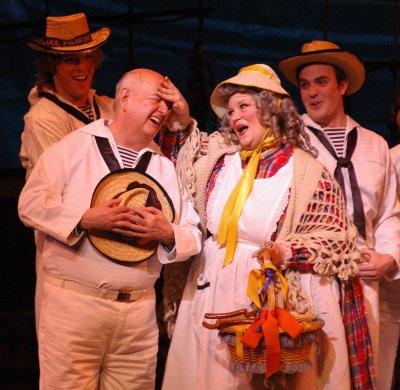 The New York Gilbert & Sullivan Players have docked its delightful production of the team’s perennial favorite H.M.S. Pinafore, or The Lass that Loved a Sailor at the intimate Kaye Playhouse and it proves to be both witty and sophisticated. Gilbert’s benign satire on the injustice of class distinction, virulent nationalism, and overweening social climbing is possibly just as relevant now as it was when it was written some 139 years ago. True, some of the topical references have faded into the woodwork, (a bookseller who had never gone to sea had recently become First Lord of the Admiralty) but the themes are still with us as human nature never changes.

Along with some contemporary updating which always gets a laugh, Albert Bergeret’s direction is sharp and shrewd and his conducting of Sir Arthur Sullivan’s sprightly and animated score is equally assured as well. The diction is crystal clear, a must for Gilbert’s intricate and clever lyrics. With an attractive and realistic setting by Albère and pleasingly color-coordinated costumes in blue, white and red (the colors of the Union Jack) by Gail J. Wofford, this is a delectable and entertaining revival for both those familiar with it and others discovering its pleasures for the first time.

Set in the harbor of Portsmouth, England, H.M.S. Pinafore takes place on the ship of name. Although everyone seems happy enough, many are secretly very discontented. Captain Corcoran’s daughter is being wooed by the white-haired Right Honorable Sir Joseph Porter, K.C.B., First Lord of the Admiralty, a cabinet level position, a step-up for her in the social hierarchy. Unfortunately, she is silently in love with Ralph Rackstraw, an able seaman under her father’s command which is socially unacceptable. 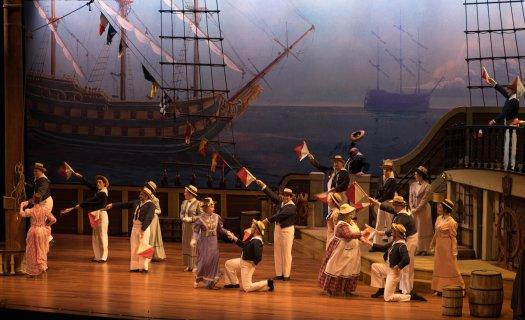 Unknown to her, he returns her love but does not have the courage to tell her as she is so far above him. Little Buttercup, an ample middle-aged woman who is not in the least little, who sells provisions to the sailors in port, is in love with the captain as he is with her, but their attraction is just as impossible in England’s Victorian social climate. And Sir Joseph’s grey-haired Cousin Hebe who follows him around wherever he goes (along with “his sisters, and his cousins and his aunts”) makes no doubt of her romantic interest in him.

But only Little Buttercup knows who the Captain and Ralph really are so that all ends happily for the committed lovers by the curtain’s fall. The telephone had only just come to London at the time H.M.S. Pinafore was written and director Bergeret adds a low comedy sequence after dinner for the inebriated captain and the equally inebriated Sir Joseph who think their champagne glasses have become ear and mouthpieces. Although this goes on a bit too long, it ends with a hilarious line about “making America Great (pause) Britain great again.”

While H.M.S. Pinafore has a great many well-known tunes (“We Sail the Ocean Blue,” “I’m Called Little Buttercup,” “Now Give Three Cheers,” “When I Was A Lad,” “Things Are Never What They Seem,” “Carefully on Tiptoe Stealing,” “A Many Years Ago,” and “Oh Joy, Oh Rapture Unforeseen”), it also has a great many unfamiliar tunes. Among the most memorably show-stopping stagings are “A British Tar” in which Ralph, the Boatswain’s Mate and the Carpenter’s Mate all do the hornpipe, and Josephine, the Captain and Sir Joseph’s rendition of “Never Mind the Why and Wherefore” in which the tiny Midshipmite continually delivers larger and larger bells to the trio for more and more choruses until they threaten to shoot the conductor if he plays yet another encore. 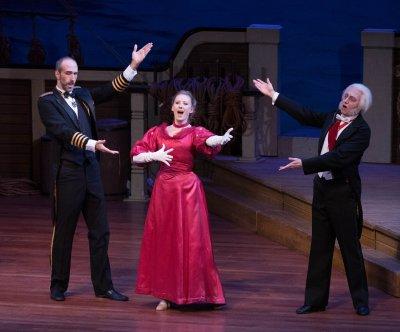 The mainly veteran NYGASP cast is excellent both for their stylish characterization and comic timing as well as their elegant, accomplished singing. Baritone James Mills milks his role as the doddering Sir Joseph Porter (who is seasick on shipboard and has trouble keeping his balance) for all it is worth. Kate Bass brings her lovely lyric soprano to bear on Josephine’s “Sorry Her Lot” and “The Hours Creep on Apace” as well as making an endearing heroine. Tenor Daniel Greenwood (alternating with Cameron Smith) makes a stalwart Ralph Rackstraw who is one of the few characters without much sense of humor.

Baritone David Auxier and contralto Angela Christine Smith as Captain Corcoran and Little Buttercup make some beautiful music together in their two duets. Bass-baritone Louis Dall’Ava is a tongue-in-cheek villain as the hunched back, limping, one-eyed Dick Deadeye. Among the support cast standouts are Bass-baritone David Wannen as a hearty Bill Bobstay, the Boatswain’s Mate, who seems to be having the best time of all. Mezzo-soprano Victoria Devany is a very obstreperous and forward Cousin Hebe.

While few shows from 1878 hold up very well today, H.M.S. Pinafore seems to have weathered its age extraordinarily well. Not only is New York Gilbert & Sullivan Players’ revival a delight in itself, it is an excellent representation of the antecedents of the modern musical comedy through European operetta being crossed with British music hall. Long may it wave!

The Kaye Playhouse at Hunter College, E. 68th Street between Park and Lexington Avenues, in Manhattan