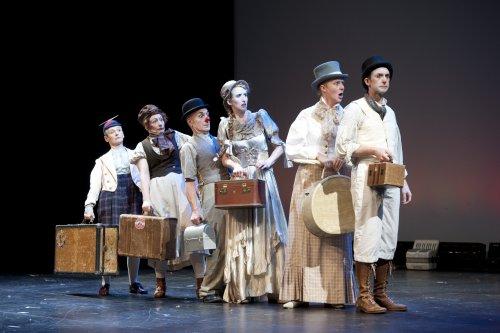 Washington, D.C.’s acclaimed Happenstance Theater is making its New York debut with its 2015 show BrouHaHa, which has been seen previously in Baltimore, Maine and New Haven. Taking for its theme what would you do if the world were about to end, this “clownesque escapade collaboratively devised and performed by the ensemble” follows the company of six through a series of skits and journeys almost all of which lead to death but from which the actors bounce back. While the company members are extremely talented, the material lacks impact and structure and cries out for both a playwright and a director. Although intended to be comic, there are no laughs in this show though it may provoke smiles.

Taking a look at the fragility of humanity in the face of death, BrouHaHa’s clown show has been influenced by Bergman’s The Seventh Seal, Fellini’s La Strada, Wim Wenders’ documentary about choreographer Pina Bausch, Beckett’s Waiting for Godot and Acts Without Words I & II, as well as the Greek myth of Pandora’s Box according to the program. While the Beckett influence is obvious in the sequence in which hats are passed back and forth and the danse macabre from the end of The Seventh Seal are clear, the other cinematic referencesmay not be as obvious to all theatergoers.

The program lists the following images: immigrants fleeing European cities in W.W. II, lines at Ellis Island, fleeing Syria in 2014, portraits of working class Edwardians, and butterflies and moths collected under glass. However, very few of these are obvious though the actors usually have suitcases with them suggesting that they are traveling. As the six characters (who remain fixed throughout the show) are dressed in Sabrina Mandell’s Edwardian garb, it is difficult to see W.W. II or modern Syria among the stage pictures. 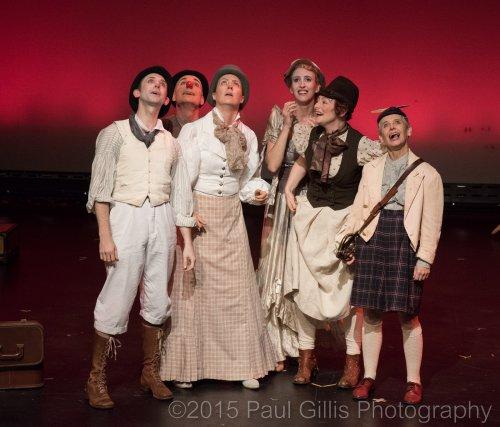 BrouHaHa is made up of a series of skits in which the six clown characters (Edith, Big Wanda, Ralph, Rose, Pandora and Roland) await the end of the world. The topic suggests great stress. However, as the clown characters are smiling and merry throughout, there is no dramatic tension in the material. After each near encounter with death, the next skit has the actors back on their feet again. The message seems to be of the resilience of humans to pick themselves up and soldier on, though this becomes repetitious and obvious after a while.

The cast enters from the audience in procession, five musical instruments, one with six suitcases. When they arrive on the empty stage, Rose (Mandell) asks “Is this the end?” and she is told by Ethel (Gwen Grastorf) who appears to be in charge of the exiles, “No, dear. Apparently not.” Pandora (Sarah Olmsted Thomas), however, establishes that “This IS the place.” The band then proceeds to a series set of pieces or skits of different lengths, some more effective than others, but loosely tied together with no schematic order to the progression. Among the most memorable are the funeral of the butterfly, the Apocalypse Café in which drink orders are taken from the audience, and the scene reminiscent of Titanic in which all six find themselves trying to stay afloat in the ocean holding on to one suitcase. Life and death situations in the course of the 75 minutes include sickening by an insect bite, strafing by bombs, a shooting star, death by drowning, and a ticking bomb about to go off.

The company demonstrates their versatility throughout BrouHaHa even though the material does not represent much range. While the entire cast appears to be a group of clowns, each has his or her own function within the show. Music director Karen Hansen as Big Wanda (but diminutive in person) who does not speak, is usually accompanied by a musical instrument that she plays, although all of the actors play an instrument at one time or another. Grastorf’s Edith not only appears to be in change but is the most formal and uptight of the group. Wearing a red nose, Mark Jaster’s Ralph is most clown-like particularly in his skit in which he has to put down all six suitcases without dropping one. 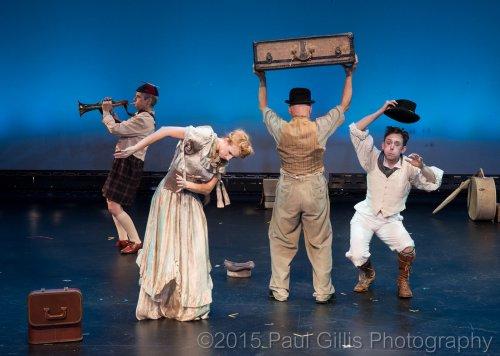 Thomas’ Pandora, the most open-minded and genial of the six, is also a singer who occasionally breaks into snatches of song. Mandell’s Rose is the most amiable and childlike, always game to try new things, while Alex Vernon’s Rowland demonstrates his expertise with pantomime particularly in the invisible Apocalypse Café in which he is bartender.

Happenstance Theater’s BrouHaHa is an interesting exercise in creating a clown show around serious themes. Unfortunately, in this show the talented cast does not make much of an impact even though the troupe demonstrates their talent and versatility. It would be fascinating to see these same actors in a more scripted, more structured show which builds to a real climax or conclusion – or one which is much more entertaining.

Theater for the New City, 155 First Avenue between 9th and 10th Streets, in Manhattan