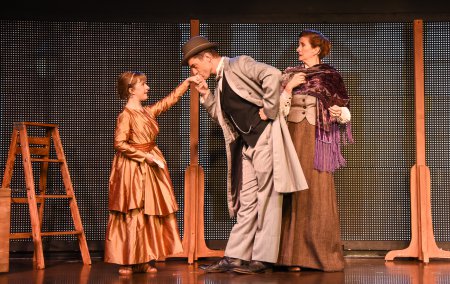 While Liberty: A Monumental New Musical about the struggle to find the money to build the pedestal for The Statue of Liberty from 1884 to 1886 is often quite charming, the question is who is the intended audience. It is too simplistic for adults and has too little action for children. With a bouncy score by Jon Goldstein and easily accessible lyrics by Dana Leslie Goldstein, Liberty is pleasant without being exceptional. It does prove timely with lines like “America, America for the real Americans,” “Isn’t it time we closed the golden door?” and “You can’t put up a wall” which suggests nothing much has changed in the last 132 years. The cast is game and in the intimate venue the audience is never too far from the action.

Dana Leslie Goldstein’s plot and book (adapted from an earlier musical, Lady of Copper by the Goldsteins and Robert Bruce McIntosh) begins in the present and then immediately segues back to 1884 as French sculptor Frederic Bartholdi is sending his daughter Liberty to New York from Paris with a letter of introduction. As he tells her, “All the Americans have to do is cough up a few hundred thousand francs for your pedestal.” However, when Liberty arrives at Castle Garden where immigrants are processed into the United States, she is not met with open arms. In fact, Francis A. Walker, Director of the Census Bureau and Commissioner of Indian Affairs who is in charge of NYC immigration, is not happy to see her and threatens to deport her back to France.

While Walker is accompanied by snobbish society widow Regina Schuyler, upper-class poet Emma Lazarus has been secretly spending her afternoons translating for the new arrivals like Giovanni Ferro from Italy. We also meet Samuel Ferguson, an African American, a stonemason, and James Goodleaf, a Mohawk Native American, an ironworker, both trying to get work on the Williamsburg Bridge. It becomes clear that America of 1884 isn’t any more hospitable to them than it is to the new arrivals. When Walker attempts to hold an anti-immigration rally, it brings Joseph Pulitzer, owner of The World, who decides to make an appeal to his readers to contribute whatever they can and he will publish the names of the contributors, no matter how small the donation. To help with the appeal, he offers to publish Lazarus’ poem, “The New Colossus,” on the front page of his newspaper. 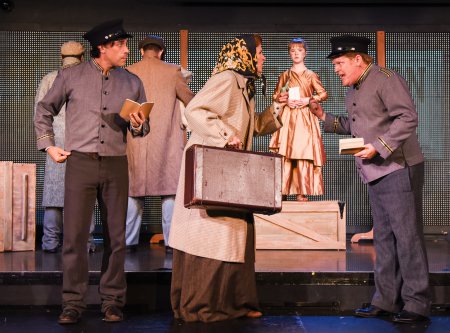 The musical mixes historic personages like Bartholdi, Walker, Lazarus and Pulitzer, with fictional ones, but it is not entirely accurate to the history. (In 1884, Cleveland was governor of New York when he first rejected funding for the statue, not yet president.) While these inaccuracies are hardly relevant at this late date, there is the confusion of Liberty being referred to as both Bartholdi’s daughter and the new Statue of Liberty. Dressed in copper robes, it is difficult to know who 16-year-old Abigail Shapiro represents at any given time.

The pop-rock score (with lyrics by Dana Goldstein and music by Jon Goldstein) is catchy but as orchestrated and arranged by Jeffrey Lodin it alternates between mellow ballads and loud anthems that drown out the singers. The memorable songs are the melodic “The Charity Tango” (sung by Walter, Schuyler and Liberty) and the witty “Making History” (sung by Pulitzer and company). The penultimate song is a setting of Lazarus’ poem (“Huddled Masses”), the same ending used for the 1949 Irving Berlin/Robert E. Sherwood musical, Miss Liberty, which covered similar material.

The production team uses most of the same people who were involved with the show’s 2014 run at Theater 80 St. Marks as well as four of the eight actors. Directing again, Evan Pappas keeps the show moving along, but some of the characterizations are allowed to descend into caricature and the waiting game for the money to be raised becomes a bit wearisome. Shapiro, now two years older, is charming as Liberty and has a sweet voice but it fails to project in this venue. Emma Rosenthal is impassioned as Emma Lazarus, caught between her liberal beliefs and her family’s conservative leanings.

Brandon Andrus as Walker and Tina Stafford as Schuyler are villains out of old-fashioned melodrama. However, Stafford is much more believable as Russian-born cart seller Olga Moscowitz. Nick DeVito is amusing as the ambitious and determined Italian immigrant Emma tries to help. C. Mingo Long as the African American stonemason and Ryan Duncan as the Native American ironworker make their roles sting as they deal with levels of prejudice, circa 1884-6. Mark Aldrich demonstrates versatility as a bigoted Immigration Official, a corrupt construction foreman Patrick McKay, and a kind-hearted and human Joseph Pulitzer.

The production design by Colin Doyle is made up of suitable slide projections and streaming video which is hampered by the LED screen it uses which proves rather distracting. Debbi Hobson’s costumes are fitting for the period and very varied, from the French characters to the Americans, and from the upper class personages to the newly arrived immigrants.  The lighting by Jamie Roderick takes second place to the slides and video.

Liberty: A Monumental Musical is a pleasant attempt to musicalize a fascinating American story that has almost been forgotten. It uses a modern perspective which cleverly sounds as though it were intended as a cautionary tale for our own times. However, the show makes some concessions that keep it from being more important as an historical dramatization.