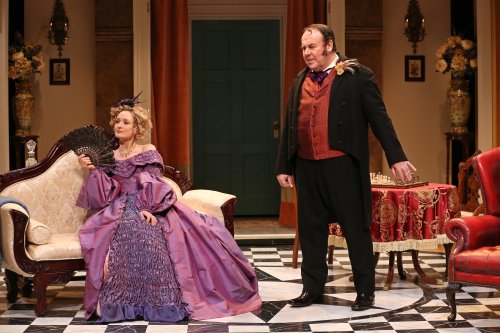 Irish-born American playwright Dion Boucicault (The Streets of New York, The Shaughraun, The Octoroon, The Colleen Baun) may have written 150 plays and adaptations but the ones that get revived today could not be more different. His 1841 London Assurance being given its first New York production by The Irish Repertory Theatre in a slightly trimmed version staged by artistic director Charlotte Moore proves to be delightful, delicious and delectable. This drawing room comedy send-up of hypocrisy and self-delusion is considered the major link between Restoration playwrights like Sheridan, Wycherley and Congreve and Oscar Wilde’s The Importance of Being Earnest.

Like many of Moliere’s comedies, the play mines its humor from the contrast of old deluded fools and young impetuous lovers in parallel and interlocking stories. Sir Harcourt Courtly, a middle-aged man of fashion has returned to London after seven years of austerity living on the continent in order to marry 18-year-old Grace Harkaway because of her fortune. He believes that his 25-year-old son Charles is a studious and sober young man but in fact he is the exact opposite. While Sir Harcourt looks 63 to his friend Max Harkaway, Grace’s uncle, he claims to be nearing 40. His union with Grace was decided by her late father who wished to unite Sir Harcourt’s then contiguous property with his own, and willed that if his daughter at age 19 should consent to marry Sir Harcourt, he would receive his property and income as a dowry. If she refuses to marry him, the property and income would revert to his heir-presumptive or apparent who would be his son Charles. 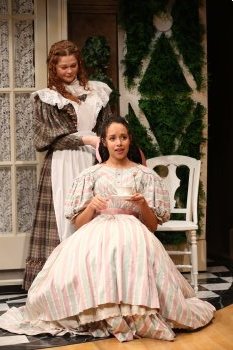 Charles returns home at 9:30 AM from a night on the town with a new drinking friend Richard Dazzle and barely misses meeting his father, but Dazzle meets Harkaway down from Gloucester to accompany Sir Harcourt to his estate and he obtains an invitation to the wedding. At Oak Hall, Gloucestershire, Sir Harcourt is taken with vivacious sportswoman Lady Gay Spanker, Max’s neighbor who is visiting with her elderly husband Adolphus “Dolly” Spanker, when Dazzle and his son Charles, masquerading as the impudent “Augustus Hamilton” show up. Grace and Hamilton are immediately smitten but Grace, who has only grown up with mercenary ideas of marriage, avoids letting him know. Sir Harcourt cannot believe the resemblance between his son and “Hamilton” and sends for Charles to visit Oak Hall and meet his new step-mother-to-be.

Dazzle and Charles convince the game Lady Gay who is always up for a jest to get Sir Harcourt to fall in love with her so that Charles can woo Grace; she is also pleased to make her complacent and placid husband (who has given her the upper hand) jealous. “Hamilton” (i.e. Charles) leaves suddenly for London in order to test Grace’s love and returns as Charles claiming that Hamilton has been killed in an accident on the road, at which point Grace gives away her love for him. Lady Gay does such a good job flirting with Sir Harcourt that he asks her to run away with him (which she has no intention of doing), but which causes Dolly to challenge him to a duel. The plot spins out of control but all is settled satisfactorily while the old fools all get their comeuppance. 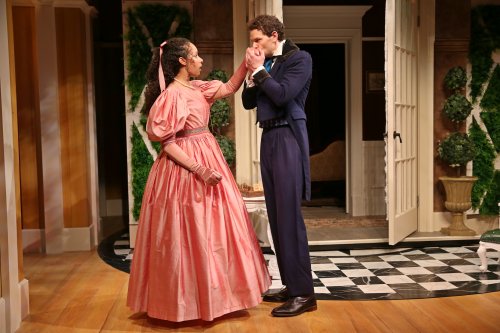 Boucicault’s play which is among his very best, if not his masterpiece, is both witty and wise. Among its one liners are “Etiquette is the pulse of society, by regulating which the body politic is retained in heath,” “Love is a pleasant scapegoat for a little epidemic madness,” and “A woman is always in love with one of two things: a man or herself.” The colorful cast includes an aging roué who thinks no one notices that he does not act his age, a bored wife who attempts to provoke her self-satisfied husband, a disillusioned young girl who has sworn off love, a young reprobate who can still be reclaimed, a lawyer attempting to feather his nest by provoking lawsuits, and servants who are smarter than their masters.

Boucicault is also very wise to human nature, both deluded and sober-thinking. Explaining a May-December marriage he tells us “she married him for freedom, and she has it; he married her for protection, and he has it.” Living in an age of marrying for property reasons, Grace announces, “Marriage matters are conducted nowadays in a most mercantile manner; consequently a previous acquaintance is by no means indispensable,” shades of the later Oscar Wilde wit. By the end of his play, all are wiser than they were before and order is restored to its rightful place in the firmament.

Under the direction of Charlotte Moore, the cast is uniformly excellent. However, some of the actors are more than that, giving superlative performances. As the spirited Lady Gay (described as “glee made a living thing”), Rachel Pickup is a memorable comic heroine, full of mirth, bon mots and schemes. She runs the entire gamut of emotions as she plays up to the various men, flirts shamelessly with both Sir Harcourt and her husband, and confides in the audience. Pickups makes the most of all of her opportunities in this juicy, dazzling role role. Colin McPhillamy as the self-deluded Sir Harcourt gives as nuanced a performance as any well-known British character actor and is continually surprising us with his pomposity and exaggerations, the sort of man who uses words like “flacon” and “defalcation” in quotes where simpler words would do.

As one of the young lovers, beautiful Caroline Strang as Grace Harkaway is charming and feisty, giving as good as she gets. As her eventually chosen fiancé, tall, handsome Ian Holcomb is versatile as first the drunken Charles, then the impudent Augustus Hamilton, and finally as the confirmed lover Charles. Craig Wesley Divino does well with the difficult role of Dazzle, a man who lives by his wits who is always in danger of being exposed as the fraud that he is. As Grace’s uncle Max, Brian Keane is fine as the one reasonable character who is always centered and speaks the truth. As Lady Gay’s doddering husband Dolly who finally comes out of his shell when he becomes drunk, Robert Zuckerman has a good time playing this elderly old fool with a split personality. 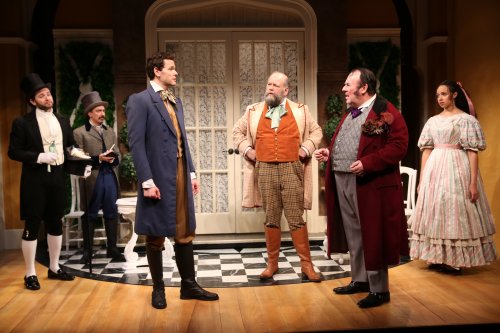 The supporting cast and minor characters live up to their character names: Elliot Joseph’s valet Cool is wily, Meg Hennessy’s lady’s maid Pert is cheeky, and Evan Zes’ attorney-at-law Meddle is annoyingly interfering and attempts to make troubles which evolve into profitable lawsuits.

Sara Jean Tosetti has designed sumptuous and stylish clothing for the mid-19th century period. The elegant sets by James Noone make clever use of a revolving stage to accommodate the play’s three required locales both for Sir Harcourt’s London townhouse and the Harkaway Gloucestershire country house. The sprightly period music which includes harpsichord accompaniment is the work of Ryan Rumery. Robert-Charles Vallance’s period hair designs and Sven Henry Nelson’s properties help turn the clocks back to 1841. 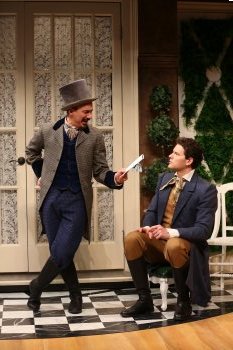 Dion Boucicault’s London Assurance is still a witty and lively play after almost 180 years. With its farcical elements laid over a drawing room comedy plot, Charlotte Moore’s adroit production for the Irish Repertory Theatre mines the play for all of its humor and wisdom concerning the foibles of human nature and self-delusion. With a superb cast, Rachel Pickup is awarded the acting honors for her marvelous depiction of Lady Gay Spanker, a bon vivant who knows how to get the most out of life and other people.