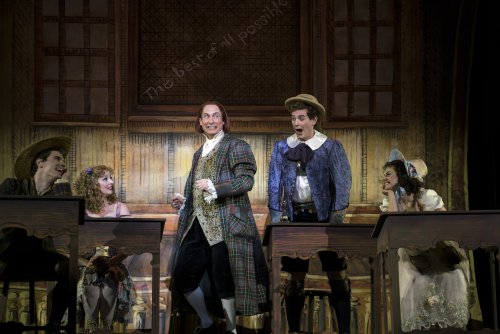 One of the great conundrums of American musical theater is that there has never been a totally satisfying production of Candide, the 1956 musical, usually identified as a “Leonard Bernstein” show (as it is in the New York City Opera’s current program notes), although the original lyrics were written (mostly) by Richard Wilbur and the book was written by Lillian Hellman (who did not permit its use in subsequent revivals).  Through the years it’s been re-thought, reconstructed and reinvented.  Subsequent versions and the current New York City Opera permutation, based on its last staging at the David H. Koch Theater, credited the book to Hugh Wheeler (after Voltaire, of course) and the lyrics to Wilbur, Stephen Sondheim, John La Touche and Bernstein.

The problem is that Bernstein’s music is so overwhelmingly brilliant and perfect in its own right that no libretto or lyrics can adequately complement it.   The current NYCO production at the Rose Theater fails in this respect, too, not helped by the creeping sensation that this Candide is under-rehearsed and misdirected.

Of course, it’s always wonderful to have the opportunity to hear “Glitter and Be Gay”; Candide’s lament, “It Must Be So”; the Governor’s slickly amorous, “My Love”; the Old Lady’s hilarious “I Am Easily Assimilated”; and the moving finale, “Make Our Garden Grow.”  But, some delicious numbers were cut, such as the quarrelsome “Quiet,” the Act One “Quartet Finale,” and the gentle “Eldorado.”

The sleeker Wheeler libretto doesn’t provide sufficient lead-ins to the songs which pop up unmotivated out of nowhere.  Even the basic premise of circus performers acting out Voltaire’s story isn’t sufficiently setup, although Clarke Dunham’s traveling circus set, complete with “Dr. Voltaire” banners and two large trolleys on either side of the stage provides the proper atmosphere.

The plot of the picaresque adventures of humbly born Candide (a goofily, sweet-voiced Jay Armstrong Johnson, terrific in the revival of On the Town) who is in love with the aristocratic Cunegonde (Meghan Picerno, who managed to put across the difficult “Glitter and Be Gay” aria with panache) takes these two and the rest of the put-upon characters around the 18th century world in a series of disconnected scenes. 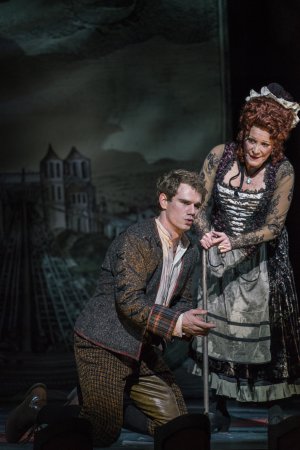 The entire play is narrated by Voltaire (a game Gregg Edelman who also plays, in addition to others, the dismayingly optimistic Dr. Pangloss and the amorous Governor of a South American country) whose wry observations keep the play moving along.

Linda Lavin, padded and badly bewigged, comes across more like a Jewish yenta than the victim of the vagaries of Eastern European warfare.  She has only one song, “Easily Assimilated,” a silly attempt at seduction, which is a shame.  This character had several numbers in the original, including one that actually referred to why she is “missing the half of my backside.”  Lavin is a star, but is ill-used here.

The game chorus of singers and dancers performed dutifully through multiple costume changes and many set changes.

There is still too much winking at the audience at the expense of the plot, as silly as it is.  Although it’s a good thing that director, Harold Prince, eliminated the cow dropping dead at the end which spoiled the beauty of the finale, “Make Our Gardens Grow,” he now is left with the performers lined up at the foot of the stage, standing uncomfortably for at least thirty seconds after the last note of that lovely melody echoed to the far ends of the Rose.  The actors try valiantly to fend for themselves with expressions ranging from mournful to bemused to goofy.  Couldn’t Prince or Patricia Birch, the choreographer, have found something for them to do other than just stand there? 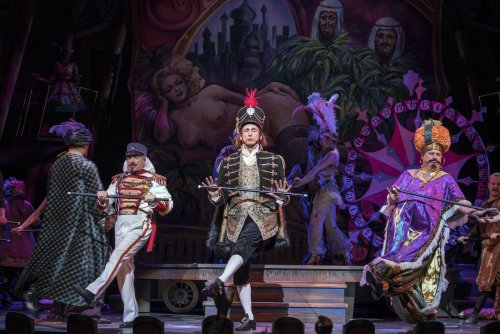 Prince brings the action out into the auditorium where the actors coyly interact with the audience members, a gimmick that has run its course, last successful in the remarkable Nicholas Nickleby more than thirty years ago.  Yes, Candide is Voltaire’s no-punches-pulled satirical take on his society, but it is not a farce.

The color schemes of Judith Dolan’s costumes seem to have been dulled down from the last staging to this one, but they do offer witty takes on each of the characters.  She is helped enormously by the wigs and makeup of Georgianna Eberhard.  (Gregg Edelman, alone, has four wigs!)

Even a flawed Candide is worth a visit even if it is just to show support for the revived New York City Opera.

Running time:  two hours and 20 minutes including one intermission