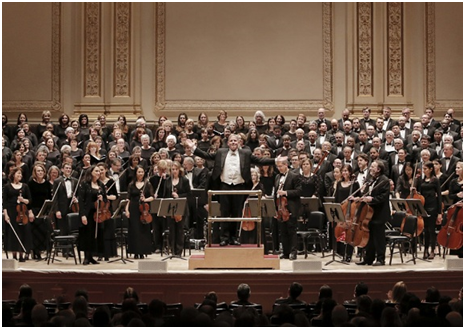 On April 29, 2014 the New York Choral Society and Orchestra, led by David Hayes, presented Gustav Holst’s well-loved Hymn of Jesus and American composer Jennifer Higdon’s The Singing Rooms in its New York City premiere. It was an evening of magnificent beauty and joyful affirmation.

Gustav Holst’s Hymn of Jesus, based on two Merovingian Latin prayer-poems by Venantius Fortunatus and excerpts from the second century apocryphal Acts of St. John in Holst’s own translation, was written in 1917, when England was reeling from the terrible losses and dislocations of World War I. The piece was not premiered, however, until 1920; Holst’s close friend, Ralph Vaughan Williams, to whom he dedicated the work, adored it from the outset. Vaughan Williams enthusiastically told mutual friends after that first performance that he wanted to get up and embrace everyone and then get drunk.

This performance by the New York Choral Society was splendid.

The monumental Holst score calls for full orchestra, a double adult chorus and a treble chorus as well. Hayes’s decision to have the superbly trained Princeton Girlchoir sing from the stage right first tier was inspired. The trebles’ function to provide the echo and the overlay, the sweetness and the optimism of multiple ‘amens’ was marvelously well realized.

The sense of mystery of the Prelude of the Hymn of Jesus was immediately and effectively established by the opening trombone solo and then, with equal competence, by chorus and orchestra together. Holst’s capacity to create and sustain sacred musical mystery, grounded in the chants of the Sarum Rite and a rich tradition of Anglican anthems, as well as in Vedic hymn studies and folk music immersion, was brought to full life in this performance.

When ethereal mystery gave way to the earthy triumph of the opening Glory! of the Hymn, Holst’s particular bigness of sacred celebration, never martial but fully conquering, was marvelous. Under Hayes’ direction, both chorus and orchestra proved capable of flexible expressivity even in forte and fortissimo dynamics.

The dance sequences of the Hymn, those portions of the music based on the gnostic text’s core and characteristic paradoxes dance, dance not; flee, remain; be infolded, infold; have no temple, have Heaven were ecstatic dervish music: urgency, waltz and syncopation were mesmerizing.

The final passage of Holst’s Hymn to Jesus, the expansive And with me cry again brought together both the subtle delicacy and the chest-resonant largeness of this work’s music and was an elegant conclusion to a performance that fully captured and offered up Holst’s profound and non-traditional account of the music of holy souls.

The second half of the the evening’s program consisted of the much anticipated New York City premiere of Jennifer Higdon’s The Singing Rooms.

Higdon pointed out that Koh’s thoughts about a choral work stemmed in part from her deep love of literture, noting that before Koh began her studies at Curtis Institute of Music, she earned her B. A. in English Literature from Oberlin College. Koh, however, left the choice of text to Higdon, and it was Higdon’s request to her Curtis colleague, Jeanne Minahan, Chair of Liberal Arts, that she advise on possible texts that led to Higdon’s use of Minahan’s own poetry. Minahan noted with wry and modest charm that she had no idea that such a big thing would come from putting a few of her poems in a faculty colleague’s mailbox.

Though Higdon would ultimately reorder some of Minahan’s lines and although the composer and the poet had extended discussions on matters such as word and phrase pronunciations, the Higdon-Minahan collaboration proved successful and the final libretto is clear and coherent, at once graceful and sturdy. Higdon’s decision to repeat the text of the opening Three Windows: Two Versions of the Day as the work’s conclusion is an important and effective one: in a work about the interconnections and overlaps, echoes and anticipations of human emotions and experiences, the reaffirmation of each day’s multiple possibilities of meaning in both imagination and in retrospect ultimately constitutes an enduring optimism about existence itself.

In the course of the extended conversation on April 13, Higdon spoke at some length about her composing process. She noted that her first instrument had been a flute and that, perhaps as a result of this, she thinks in lines and then puts lines together and on top of each other. She noted, too, that she writes daily, and for many hours a day, and that it can be slow, hard work. On a good day, she said, I might end up with fifteen seconds of music. It was a statement equally interpretable as a confession of limitations and an appropriate assertion of pride in achievement.

Higdon may, as she says, write linearly, but the result, as evidenced in The Singing Rooms is dense, multiply textured and organically supple music: hundreds of musical lines converge, diverge and reconnect in sound that is deeply rewarding, surprising in its explorations and satisfying in its resolutions.

Higdon’s writing for violin in The Singing Rooms is particularly exciting: she makes a range of demands of the instrument that extend from the traditional to the most challengingly daring. Koh’s virtuosic musicianship her ability to move from electric wildness to sensuous delicacy, from feral gutsiness to delicate tenderness and her obvious pleasure in playing this music were entirely marvelous.

In her program notes about The Singing Rooms, Higdon wrote, This is a house where the violin sings, the choir sings, and the orchestra sings. Each room is its own sound world. The work as a whole, then, is not just about singing, but about architecture, about the ways in which we describe and consider the lives we lead and about how these descriptions and considerations themselves become shapes and structures that we subsequently inhabit.

Complexities abound in The Singing Rooms not merely because of Higdon’s rich compositional style but because of the work’s multiple intentions.

It is a three-way dance: orchestra, chorus and violin are equal partners in a piece that includes solos, duos and triads. At times, only the orchestra, only the chorus or only the violin make music; at other times, only two make music; at still other times, all three play or make music, or dance together. And because the chorus sings text, rather than just making musical sound, words too are invited into the dance: monologues, dialogues and conversations take place in a world of multidimensional sound and movement.

Although there are passages of tremendous delicacy and quiet in The Singing Rooms, the overall feel in much of it is one of high-energy urgency: courageous intensity is required to honestly ask ourselves,/where did we spend our days, and, at its biggest, Higdon’s music can lift us out of our seats. Higdon can also, however, create stunningly delicate music that simply floats. The dream passages in the middle of the piece seemed to shimmer; the lush intimacy of Give me forgiveness and the full, sensuous grace of You are the ache were very beautiful.

In spite of the intense urgency of The Singing Rooms, the work’s conclusion a single, infinitely extended and completely pianissimo violin note released up into the empyrean was exquisite and, for all its invitation into silence, an affirmation of all the sound we humans need to make meaning in our daily lives.

Whether intended or not, the programming decision to pair the Holst and the Higdon raised some of the most interesting intellectual questions of the evening. The two composers are at once very cosmopolitan and simultaneously ineradicably associated with their national origin: Holst couldn’t be taken for anything but British and Higdon is through-and-through American. Both of their works, based on complex, resonant texts, grapple explicitly with matters of purpose and meaning.

In both works, though mysterious quiet and dreamy ethereality bookend and punctuate the music, it is the bigness of the music that keeps echoing inside one.

In the April 13 conversation, Minahan described herself several times as having been stunned at how big and explosive Higdon’s musical setting of her words was. For Minahan, poetry was somehow quiet inside herself as she was writing it: Higdon’s musical loudness was a shock.

The gnostic text Holst turned to for his Hymn of Jesus, introduced to him by G. R. S. Mead and his circle of theosophists was, in Holst’s day, a rare and isolated example of a much wider literature of gnostic texts discovered, examined and analyzed in the middle and end of the twentieth century. Both in the communities in which these gnostic texts were circulated in the ancient and early medieval Near East and in the varied mystical traditions that emerged from them over many centuries, the association of mystery with silence, contemplation and meditation has been deep. The mechanism of entry into these texts’ wisdom the center place where paradoxes’ opposites meet has been quiet: Be still, and know that I am God (Psalm 46: 10).

Yet for both Holst and Higdon, the entrance into wisdom and meaning is not just by means of music, but by means of big, gorgeous, born-from-pulse-and-guts music, announced and then bad farewell by celestial gentleness. Loudness and quiet function as siblings to music and silence. Holst’s and Higdon’s passion separate and, as it turns out, shared is to create music that compels us to an examination of meaning and meanings, both the ones we make for ourselves and those we believe God makes for us. Holst’s and Higdon’s large music draws us into the perfect silence of contemplation. In their texts and rhythmic choices, Holst’s Hymn of Jesus and Higdon’s The Singing Rooms are explicit invitations to dance: like swirling sufis, we are called into movements that are still at the center.

Two entirely marvelous pieces of music one old and well-known and the other quite new beautifully played and presented made for an evening of rare and lovely pleasure and for many hours of grace-filled reflection afterwards.