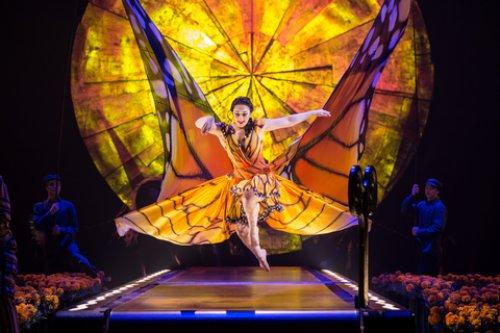 Luzia: A Waking Dream of Mexico is Cirque du Soleil’s 38th original production and its 18th performed under The Big Top. The name is a combination of the Spanish word for light (luz) and the word rain (illuvia). Written and directed by Daniele Finzi Pasca (co-authored by Julie Hamelin Finzi) with Patricia Ruel as Director of Creation, the colorful show is a surrealistic journey through the various landscapes and arts of the country. Using the frame of a traveler parachuting into a land of memories, the show moves from a movie set to the ocean to a smoky dance hall to the desert. It touches on the music, design, sports, entertainments, animals and mythology of Mexico.

Cirque du Soleil has set the bar so high in previous productions that we have come to expect a certain level of expertise and physical prowess. Luzia is missing the wow factor that appeared in earlier Cirque shows simply because we have seen many of these acts before. Without a narrator, much of the Mexican history and imagery depicted will be lost on the casual viewer. 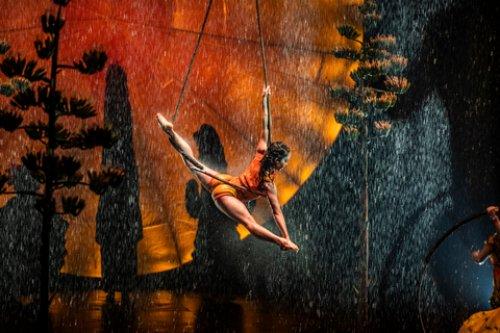 Some elements are entirely new. The nearly three-quarter circular stage includes two revolving stages (as well as treadmills) so that the audience gets to experience several of the acts from all perspectives.  Using water in Luzia adds another dimension to the visuals. The Double Cyr Wheel and Trapeze act culminates in a rain storm so that it would seem to make the performance more difficult. The Clown/Traveler attempts to refill his thermos from a passing shower which keeps moving away from him. Eventually two dimensional images created from water droplets paint pictures in the air.

The Football Dance for a man and a woman finds them in the middle of a downpour but they continue nevertheless. The artist of the Aerial Straps represent a demigod of the rain ascends from a cenote (a sinkhole) to spin higher and higher over the pool from which he emerged. Our Clown/Traveler appears to float overhead as he goes scuba diving high across the stage exploring the underwater world until he disturbs some of the plant life on the ocean floor. 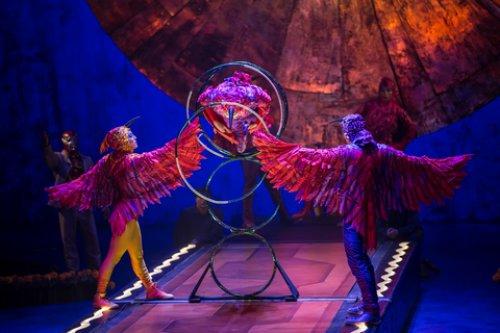 The animal life of Mexico is depicted both as mythic and as literal images: The Running Woman spreads huge butterfly wings as she runs ahead of a giant silver horse. The Hoop diving act is performed by seven acrobats dressed as hummingbirds. A life-size jaguar (puppet) interacts with the Aerialist as he sails over the pool of water. Other performers are dressed as a cockroach, grasshopper, armadillo, snake, while still others including the band wear the heads of crocodiles, swordfish and tuna. Among the plant life depicted in various scenes are a field of yellow marigolds, agave plants, peyote, and cacti. Mexican designs depicted include Otami embroidery patterns, Guayabera (the traditional men’s wedding shirt) and a huge red Papel Picado curtain made from punching 13,000 holes in its surface.

The set designed by Eugenio Caballero is backed by a huge disk which represents at various times the sun, the moon, and the Aztec calendar, and turns yellow, orange, green, blue, purple, and red and black. It can rotate horizontally and moves forwards and backwards. It changes color and design throughout the show. Equipped with a giant light box, it at times appears to glow from within. 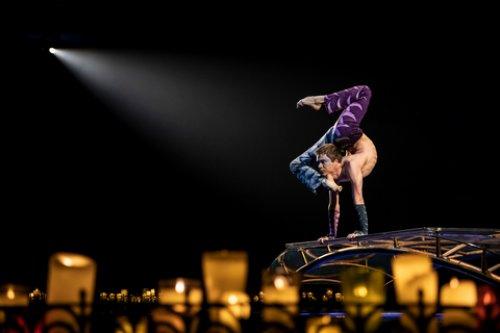 Among the acts that are breathtaking are the Contortion act (Aleksei Goloborodko) in which the performer appears to twist his body into that of a pretzel. He even manages to touch the back of his head with his pelvis. The amount of practice to be able to do this simply defies imagination. In the Swing to Swing act, nine artists perform this double act on the Russian swings which are mounted on a turntable which revolves while the acrobats are flying as much as 33 feet in the air. Krzysztof Holowenko (dressed in a luchador mask from the Mexican sport of lucha libre or free fight) swings on an apparatus that he makes go higher and higher until he reaches the tipping point and the swing makes the full turn.

Cylios Pytlak juggles seven pins at such speeds that it is impossible to count how many he has in the air at any given moment, backed by the musical accompaniment of the marimba, typical of the Veracruz region of Mexico. Singer Majo Cornejo appears periodically to sing the Latin American flavored works of composer Simon Carpentier dressed in designer Giovanna Buzzi’s series of gorgeous gowns include one in which the red flowers on her white dress suddenly open up to view.

While Luzia: A Waking Dream of Mexico does not offer much that is entirely new, it is a colorful, immersive visit to the land south of the border. Mixing history, mythology, arts, sports, music, culture, geography and feats of physical prowess, Luzia is a fun-filled entertainment suitable for all ages. You might find yourself wanting to read up on the culture of Mexico after this surrealistic dream vision.

The Grand Chapiteau (The Big Top), 123-01 Roosevelt Avenue, Flushing Meadows Park, in Queens (next to Gate 9 of Citi Field)