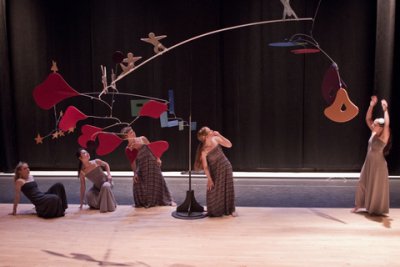 The General Mischief Dance Theatre prides itself in its upbeat philosophy, mixing joy and laughter with loftier ideas and ideals of community and friendship.  The troupe uses simple choreography, colorful costumes and clever audience participation to appeal both to children and their parents, the primary audience for the company’s Up and Away at the JCC Manhattan.

The choreography, mostly by Emily Smyth Vartanian, tends toward the musically unsophisticated, combining ballet (piqué turns, little jumps, attitude and arabesque poses), jazz (sassy turned in knees and jazz hands) and Latin American influences (hip waggles and shimmying shoulders) all punctuated with giant smiles and an appealing air of merriment.  The dancers are steady and personable and jolly performing the steps joyfully.  They all relate to each other—and the audience—beautifully.  Costumes are colorful versions of dancewear and street clothes.

“Buzz – Part II,” to quietly bouncy music by Ozomatli, was lit entirely by the cell phones held by the five dancers who became floating faces.  (Was this a not so subtle way to tell the audience to turn off their phones?  If so, it was probably the sweetest message of its kind.)

In “Hardball,” two dancers hung in harnesses from bouncy bungy cords, sneering, making baseball gestures (“yer out” and “safe”) and flexing their arms and legs as audience members tossed wiffle balls—laboriously handed out to the audience—at the duo who good-naturedly responded, bouncing around to avoid the harmless spherical missiles.  The famous “Dueling Banjos” provided the musical support.

“The Love Trio” took the dancers from a silly, undisciplined ballet class to a sassy little jazz party and finally to ‘The Shell Game’ in which a man’s hat with a crimson lining was passed around to “The Pink Panther” theme.  The audience was asked to choose which girl wound up with that hat. The simple costumes, tunics over practice outfits, were designed by Olga Ferreira. 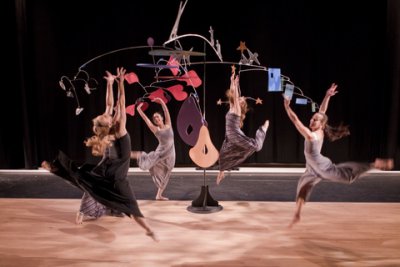 “Suite Shel,” “inspired by the poems of Shel Silverstein,” involved fooling around with many pairs of shoes donated by audience members and also a sequence of flirtatious behavior focused on the sole male member of the troupe, Ray Scandela. The choreography was by Madeline Hoak, Celine Rosenthal, and Vartanian.  The music, specially written and performed for General Mischief, was by Lizzie Hagstedt.

A world premiere, “Recreation,” intriguingly combined dance with the onstage construction of a beautiful work of art by Kevin Reese, and was the standout work of the program.  The dancers picked up pieces of the mobile, danced around, joining forces to assemble the intricate work which wound up almost spanning the width of the stage, its many pieces sparkling in the lighting of the troupe’s technical director, Mark Baker.  Although the choreography didn’t reflect the shapes of the individual pieces—which included stylized people, hearts, etc.—or even find dance equivalents of the gorgeous mobile, the dancers had a great time putting it all together, walking about, wiggling, and hitting poses.  The music, some Latin influenced, was by Donna Viscuso and Jackeline Rago.

The audience was invited up to walk around the mobile.

Some of the setups took so long that they affected the flow of the program, although the audience members appeared to enjoy being part of the show.

This is a modest troupe, with modest goals, performing pleasantly amusing works.

The rest of the troupe is made up of Jane Abbott, Wendy Lechuga, Ellen Henry, Hoak, Saki Masuda, Andrea Steiner and Vartanian.

Running time:  one hour and 20 minutes with no intermission