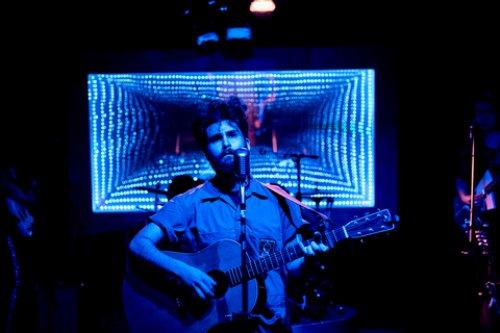 Less than a musical and more than a concert, 1969: The Second Man is a pleasing folk-rock bio of legendary astronaut Buzz Aldrin that is both mellow and informative. With concept and score by Jacob Brandt and book by Dan Giles, this is really a song cycle both telling Aldrin’s story and commenting on it. Standing before mikes, the six-member cast perform as musicians, actors and vocalists, with all but one of the cast taking on a role in the story which has previously been told in Aldrin’s memoirs Return to Earth (1973) and Magnificent Desolation (2009). Jaki Bradley’s direction moves the performers interestingly around on Oona Curley’s unit set keeping the presentation from becoming static.

While the events of Aldrin’s life are not told in strict chronological order, the show’s 15 musical numbers tell his story from college through his problems with adapting to life on earth after he returned from space as the invisible second man to walk on the moon. Playing both the narrator and Aldrin, Brandt begins with his own fascination with the moon and to his personal copy of a signed photo of the astronaut. He then segues into Aldrin’s training with NASA. Along the way we find out that Aldrin was a decorated fighter pilot, a genius engineer, and that he wrote an acclaimed doctoral dissertation at MIT. The team for Apollo 11 is chosen and Aldrin is named second in command which according to protocol means he will be the first man on the moon. At the last minute, Neil Armstrong, Buzz’s commander, is chosen to take the first steps on what turns out to be July 21, 1969. Third man Mike Collins will remain in the lunar module. 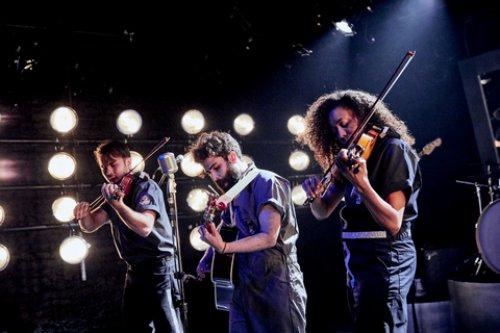 After their return, Aldrin has trouble being the second man and feels mainly ignored. His alcoholism and depression lead to two divorces in the 1970’s as well as bankruptcy. Getting a call to work for the Air Force but not NASA makes things worse. Aldrin’s emotional states are delineated as the years go by before the show takes us to the moon with Armstrong, Aldrin and Collins. In the final song, Buzz has to face his anger at not being the first man. Ironically, the iconic photograph used on the American commemorative stamp is of Aldrin on the moon, and not Armstrong as most people mistakenly believe.

The six-member band on guitars, violin and percussion are excellent musicians. On guitar, Brandt is very low-key as Aldrin and his lyrics while pleasant do not delve very deeply into his problems. Maya Sharpe (on violin) is strong as the more well-adjusted Armstrong, while Paris Ellsworth (also on violin) is amusing as the upbeat and cheerful Mike Collins who was never supposed to set foot on the moon during the Apollo 11 mission. The songs which have a similar sound often segue one into another but the most effective one is sung by Angel Lin as Aldrin’s cast-off first wife Joan in the plaintive, “When You Were Gone.” Several of the numbers have an eerie quality as if we are floating out in space detached from the world we know. Tony Aidan Vo on percussion also plays the voice of reporter Eric Sevareid and Command Control from Houston. Lizzie Hagstedt (on guitar) occasionally enters one of the songs solo. 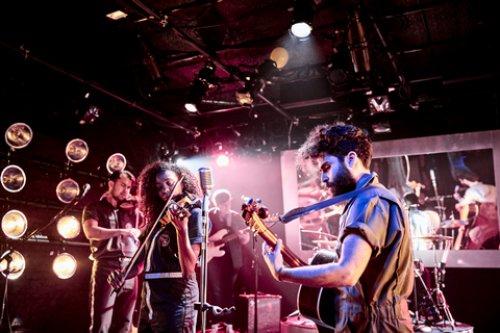 Curley’s set (with an assist from Daniel Prosky as co-scenic designer) makes clear that this is a concert: aside from Brandt who is usually front and center, the other performers are on round platforms placed on a semi-circle around the stage. Along with co-designer Stacey Derosier, Curley’s lighting includes 25 clamp lights on both sides of the stage, used in various combinations, as well as a large monitor on the back wall that periodically has blue patterns. However, the lighting never suggests that we are actually traveling through space. Ntokozo Fuzunina Kunene’s outfits surprisingly put the three astronauts in different costumes, rather than the same uniforms, without explanation. The excellent sound design is credited to Jim Petty of Five Ohm Productions.

The mellow sound of Brandt’s score proves to be easy listening, but the individual musical numbers do not build to any dramatic climaxes so that the show seems tamer than material concerning depression and alcoholism suggests it should be. However, the ballad forms and guitar/violin instrumentation are pleasant to the ear. Some of Giles’ dialogue which is not part of Aldrin’s story seems extraneous and the show takes a while to get started. 1969: The Second Man is entertaining enough in this concert form, but needs some work before going to the next level. Jacob Brandt, however, proves to be a talented new musical voice.