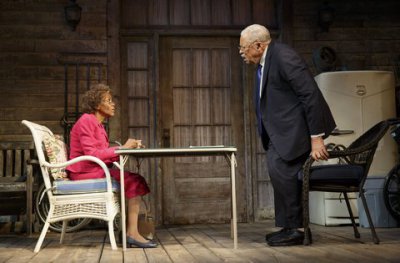 D.L. Coburn’s 1977 Pulitzer Prize-winning play, The Gin Game, is a slight play, a series of intense, character driven conversations, with only a wisp of a plot.  Fortunately, Mr. Coburn has written two roles that are catnip to actors of a certain age, judging from a quick gander at the casts of three Broadway productions.  Originally, his two personable, elderly, nursing home residents were played by Hume Cronyn and Jessica Tandy, who put their stamp on their show with their frayed elegance.  Julie Harris and Charles Durning were more robust, and physically disparate in the 1997 revival.

Now the frail-seeming, but elegant Cicely Tyson and imposing, stout-voiced James Earl Jones have taken on The Gin Game and make it totally their own, finding nuances in every line, filling in the silences with the kinds of reactions that make live theater an electric experience.

As Weller (Jones) and Fonsia (Tyson), the two make the bedraggled veranda of their “home for the aged” their little world in which they argue, flirt, sweet talk, and, oh yes, play hand after hand of gin.  We find out a good deal about them, why they both wound up in a third-rate establishment, depending on their government welfare to sustain them and why they are isolated from their friends and family.  The details of their upsetting descent on the social ladder slowly reveal themselves along with the little idiosyncrasies that define them.

Weller believes himself to be bit of a card shark and corrals the reluctant Fonsia into a game of gin, sealing their fates.  When the supposed neophyte card player, Fonsia, wins hand after hand, Weller’s ego goes into overdrive.  Even worse, when he perceives that she has let him win, he goes crazy.  This penchant for angry over-reaction drives the play.  Fonsia, her sense of decorum deeply offended, tries to avoid Weller, but their mutual emotional gravitational needs pull them back together, making for a series of funny, touching and ultimately heartbreaking scenes. 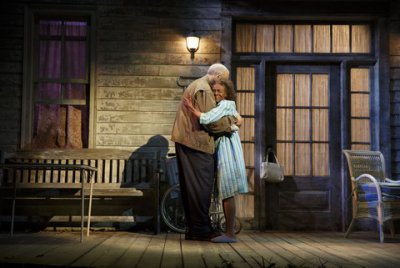 In the richest, most affecting moment Weller takes Fonsia into his arms to dance to music coming from the community room just behind them.  The moment is so private and powerful that it is difficult to watch, but so rich in emotional truth that looking away would be foolish.

Missing James Earl Jones and Cicely Tyson in any show would be folly.  Missing them inhabiting The Gin Game would be a crime.

Leonard Foglia has directed with finesse, understanding these expansive personalities and the rhythms of Coburn’s language.  He is helped by the scenery and costumes of Riccardo Hernandez.  Hernandez’s nursing home porch is filled with tossed off, broken down furniture, a telling, symbolic touch missing from previous productions.  His costumes subtly chart the ups and downs of Fonsia and Weller’s budding friendship, whether they are in sloppy robes or shabby elegance.

David Van Tieghem’s sound design brilliantly creates the ambiance of the home, from the twittering birds, to the distant thunder and music emanating from the community room.

This The Gin Game revivifies what might have been a mere vehicle.  This cast and their support team make it a minor classic.