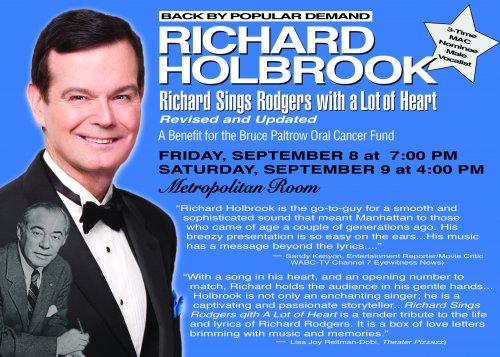 [Note: This is a review of a previous performance]

Richard Holbrook was on tap at the Metropolitan Room for a two-night only performance of his latest cabaret, “Richard Sings Rodgers with a Lot of Heart.” An ambitious undertaking, he chronicled the life and music of one of the greatest composers of the 20th century, the late Richard Rodgers, from his birth in 1902 until his death in 1979. Rodgers had such an impact on the music world that Alec Wilder once wrote, “Legend has it that somewhere amongst the many radio stations of the United States, a song by Richard Rodgers may be heard at any time, day or night, the year round.”

Holbrook showcased classic songs written by Rodgers and lyricist Lorenz Hart during their 25-year  collaboration, then favorites from his Oscar Hammerstein II period, and ended with a couple of well-loved pieces that Rodgers created with Stephen Sondheim shortly before his death. Counting the medleys, he sang about 30 songs in all and interspersed them with interesting background stories that gave them context.

Holbrook took on some legends like “The Sound of Music,” which was part of his opening medley, and “I Have Dreamed” from The King and I but, as one might expect, he was most at home with the romantic melodies his crooner voice is best suited for like “My Heart Stood Still,” “Any Old Place With You,” and “Do I Hear A Waltz?” The real show stopper, though, was “Soliloquy,” which he saved for last. A lengthy number from Carousel, Holbrook not only sang it, he acted it out. He took off his tie and got into character and, although not as good as his singing, his acting was entertaining, even endearing, and the most memorable part of the show.

As always, Holbrook was dapper in his signature tux and brought real class and style to the stage. His rich, tenor voice was soothing to the ears and stirred the packed audience, mostly an older crowd, into reminiscing with him about the old days when these songs were written. Their enthusiasm was undeniable, underscored by their continuous applause. Holbrook’s vocal instrument is not particularly robust but, what he lacks in volume, he makes up for in passion; a great interpreter, he really feels the music and sings with a lot of heart just like the title of his cabaret. This, along with his great stage presence, connects him with his audience and they find themselves being reeled in. 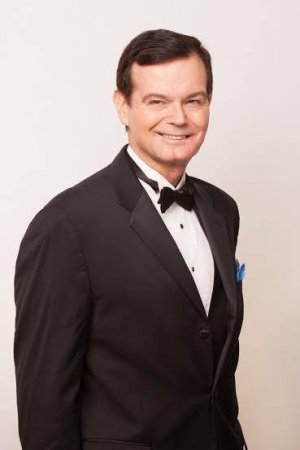 It didn’t hurt, though, that he was backed up by the lively Tom Nelson Trio, which added to the energy of the performance. Led by Holbrook’s musical director Tom Nelson on piano, bassist Tom Kirchner and drummer Peter Grant rounded out the group. Everybody seemed to know just when to zig and when to zag. Director Richard Barclay didn’t miss a beat, either, and Jean-Pierre Perreaux provided good sound and lighting, although it would have been more dramatic and interesting if he had shone more light on the musicians now and then. You could hardly see the drummer in the back on that tiny, crowded stage.

If there were any negatives to this otherwise banner night, it would be that the Metropolitan Room is a very small venue for a singer backed up by three musicians with large instruments: in this case a grand piano, double bass, and drums. Also, there was no set to speak of, just a plain backdrop. Nobody seemed to mind, though; the Metropolitan Room is known for its intimate setting and that is part of its appeal.

As for Holbrook, he carries something extra in his voice these days – a zest for life. His battle with jaw cancer two years ago gave him a new appreciation for it and for the musical instrument that brings him such joy. He no longer sings just for the love of the music; he now sings because he is glad to be alive and this has made him better at his craft. He said one of the reasons  he chose to do a cabaret on Rodgers is because the composer also suffered from jaw cancer and he relates to what the composer went through. In a recent interview with WABC-TV, Holbrook had some advice for people facing adversity. He said to focus on your passion and it will see you through. That’s what he did and now he is on top of his game. Admired and respected in the world of cabaret, Richard Holbrook has been nominated twice for the coveted MAC Award for Best Male Vocalist.

A Benefit for the Bruce Paltrow Oral Cancer Fund