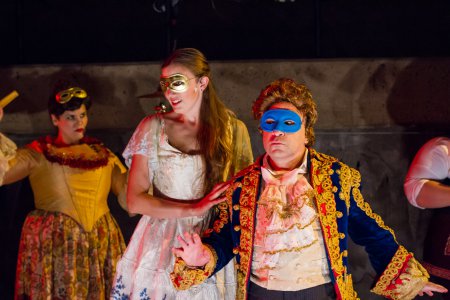 The Black Crook holds a mythical place in theater history as the purported first musical comedy in the United States.  The story as it comes down the decades involves a second rate melodrama that became a big hit when it combined forces with a stranded Parisian ballet troupe whose dancers caused a scandal wearing flesh-colored tights.  Produced at the Niblo’s Gardens (Bleecker Street and Broadway), it was smash hit and ran for years and was revived a number of times.

In an entertaining mini-version, conceived and deftly directed by Joshua William Gelb and produced by Moe Yousuf, The Black Crook made yet another appearance on a New York stage, the Abrons Arts Center’s tiny Underground Theater where eight gallant actor/singer/dancer/musicians worked mightily to demonstrate why this show made such a dent in NYC theater and beyond.  They call this version “an origin story for the spectacle that is America,” and their efforts paid off in a colorful, silly, yet somehow satisfying production.

The creators of this version combined songs from the period—several probably used in the original production—with a pared-down version of the second-rate melodrama written with by Charles Barras (portrayed as always rattled and put upon by Steven Rattazzi), who tells his side of the story while also playing the romantic lead, Roldolphe, in the actual Black Crook.

Gelb and Yousuf decided to have characters break the fourth wall to face the audience and give historical narrative about how the show got produced, which included a great deal of backstabbing and arm-twisting. 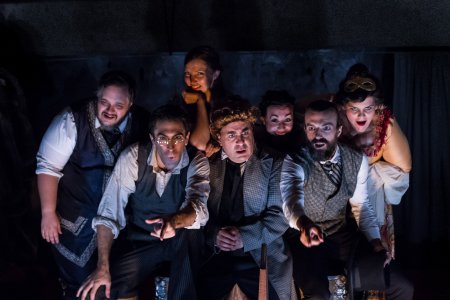 The plot of Barras’ melodrama, which incorporated ideas from such sources as the Faust legend, tells of the thwarted marriage plans of Rodolphe and Amina (the lovely Alaina Ferris who also served as music director).  Amina’s mother, Barbara (Kate Weber, properly venal and grasping), seeking riches and position has given her daughter to the evil Count Wolfenstein who plots to get rid of Rodolphe by handing him over to Hertzog, the Black Crook of the title.  Hertzog is a master of black magic and further plots with Zamiel, the Devil, to provide him with Rodolphe’s soul for an annual black magic ritual.

How Rodolphe escapes and gains the hand of his beloved takes up the rest of the convoluted plot which includes odd, but theatrical, transformations of characters and originally many spectacular set changes and hundreds of dancers—here, eight!—filling the stage.

Choreographer Katie Rose McLaughlin did what she could with her mostly non-dancer cast, arraying them across the space, moving them in geometric patterns and taking advantage of all the nooks and crannies of the venue.

There are characters with names like Von Puffengruntz, Redglare, Puffin, Stalacta, Queen of the Fairies, and Greppo, with even an appearance by Edwin Booth (brother of Abraham Lincoln’s assassin) played by Christopher Tocco –  most of whom are there for little more than showing off costume and scenery changes or telling the audience members what happened with the show and its creators over the years following the spectacular success of the original staging. 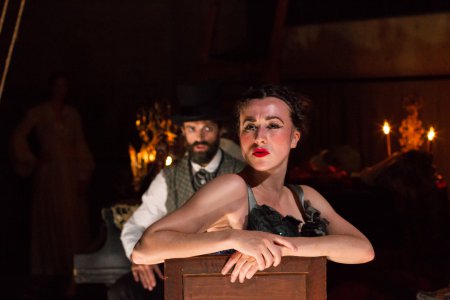 Merlin Whitehawk and Jessie Shelton in a scene from “The Black Crook” (Photo credit: Kelly Stuart)

Gelb has adapted a highly stylized, gesture-filled acting technique when the cast is reciting the original libretto and a more natural style when they are spouting historical vignettes, which works once one gets used to it.

Although Mr. Rattazzi doesn’t quite possess the physical attributes of a romantic hero, he was fine as the beleaguered author, Barras.  As the evil characters—both in the libretto and theater history—Lizzie Hagstedt (playing Wolfenstein and Zamiel), Merlin Whitehawk (as the backstabbing producer Wheatley and Hertzog) chew up the scenery and twirl mustaches in perfect period style.

The rest of the cast did yeoman work acting, singing, dancing and playing instruments:  Randy Blair (as Van Puffengruntz), Christopher Tocco (as Greppo and others) and Jessie Shelton (who showed off her dancing skills).

Carolyn Mraz’s scenic design is masterful in suggesting the period with its use of props, textiles, furniture and several old-fashioned pianos.  Ms. Mraz was helped by Bradley King’s lighting design which defined not only the different settings, but also the shifts between the libretto and the narration.  Normandy Sherwood did excellent work with the costumes which were quite sumptuous for an Off-Broadway production.

The production proceeded with often confusing speed with plot points rushing by.  (A synopsis might have helped, although the in-depth comments on the many beautifully performed period musical numbers were enlightening.)

Despite its silly plot, for theater buffs, this is a must see for historic reasons.

Running time:  two hours and ten minutes including one intermission