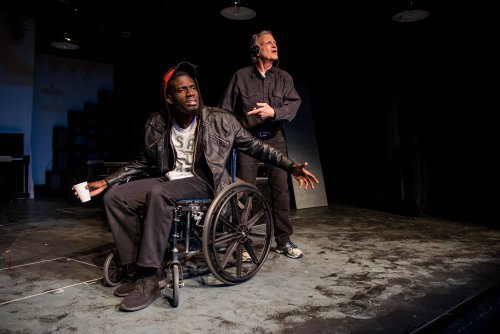 Maybe the thought of ending up homeless isn’t something that the everyday person considers, but in Shara Ashley Zeiger’s new hip-hop infused play Roughly Speaking, it goes to show that even the luckiest of people today could end up homeless tomorrow.

Taking place at a Manhattan homeless shelter, Roughly Speaking follows the daily lives and interactions of a group of homeless New Yorkers, while sharing all of the characters’ backstories leading up to their arrival at the center.

The storytelling is told through the eyes of Steven J. Michel’s Lightning Bolt, a former rapper and YouTube star who is now homeless and in a wheelchair. In between each of the scenes of the play, Michel delivers razor sharp rap monologues and soliloquies that tell stories of his past, the trials of others, and other musings on the life of a homeless person and what that feels like. Charming and dynamic, the fact that Michel is seated in a wheelchair for the duration of the play is lost behind the actor’s energetic and powerful performance. 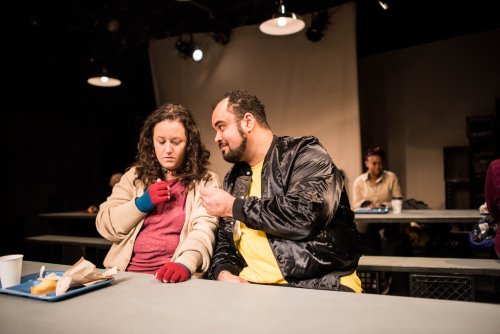 Focusing on a group of roughly fifteen regulars that attend the homeless shelter in question, the play is a series of intimate and telling conversations between homeless people of all different walks of life–and their myriad ways of ending up in their current position. Playwright Zeiger, who is also founder and artistic director of producing company The Platform Group, plays Diana, a recovering addict and recent widow who is constantly struggling with staying clean. Playing a woman who is broken and beaten down, Zeiger’s familiarity with the script gives her performance an authenticity which is truly garnering of sympathy. Joanie Anderson plays a community college student named Melissa, who sleeps on the subway and desperately wants to better herself but just can’t seem to break the cycle.

Some of the actors are double cast in roles, which works in some cases but hinders the story in other. In the case of actor Christopher Michael McLamb–who plays nice guy Richie and sleazy guy W–too few distinctions are made in the portrayals of each of the characters to convince the audience that these are two totally different men with disparate ethical positions. Conversely, Troy Valjean Rucker is double cast as the transgendered, AIDS carrying Trudy and the saxophone toting Lester and–though these character traits are admittedly more stark in contrast and therefore more easily distinguishable–makes a noticeable effort to alter both his physical and vocal choices enough to convincingly separate the two performances.

The homeless shelter is operated by Alicia and Tiny played by Madeline McCray and Danny Bolero, respectively, a married couple whose mutual interest in helping others has fueled their relationship for years. McCray and Bolero’s relationship is the emotional foundation of the show, as it is both heartbreaking and lovely seeing the caretakers engage with the troubled people that have, over the years, become their friends. 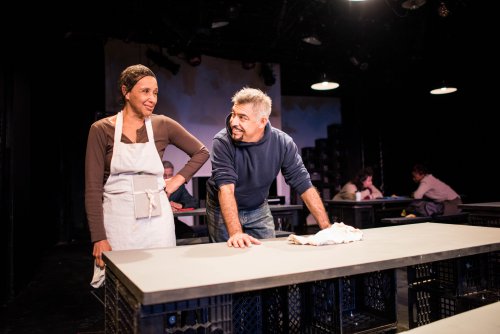 Presented at the Tada Theater in Chelsea, Jonathan Wetjen’s scenic design is interesting but unnecessarily enigmatic. The set is comprised of a series of benches and faux walls, which between scenes are moved into different formations. Though this can be aesthetically pleasing, there are times where it seems set pieces are lifted and moved but then placed in a position which hardly differs from the former location at all. The costume design by Shirlee Idzakovich is appropriate in that in most cases the characters are garbed in clothing which could realistically be seen on an impoverished person, but ultimately fails when it comes to the actors that are double cast: very little in terms of wardrobe is done to distinguish one character from the other, which causes some confusion when an actor’s two characters appear on the stage in quick succession.

Directed by Celine Rosenthal, this heartfelt new play is–for the most part–an empathetic window into the lives of a troubled few. Behind Zeiger’s tight script and a handful of admirable performances, Roughly Speaking is an honest representation and dissection of the homeless culture in New York City.