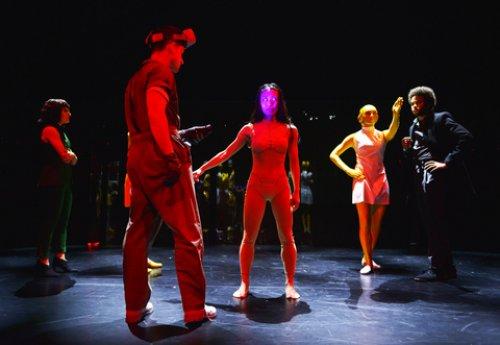 Chase Brock’s full-length The Girl with the Alkaline Eyes is a futuristic fable whose moral is that robots, however humanlike they become, can never be depended upon for warmth and comfort—no matter how attractive they are.

The members of The Chase Brock Experience are, indeed, attractive and also mighty good dancing actors, perfect performers for Brock’s psychological and emotional work, his most complex work as a modern dance concert choreographer.

Brock’s work once prized effect over substance, but years of choreographing situation and character-based musicals (Be More Chill, Spiderman: Turn Off the Dark) have sharpened his artistic vision; or, perhaps, he has matured as he’s gained experience—and years. 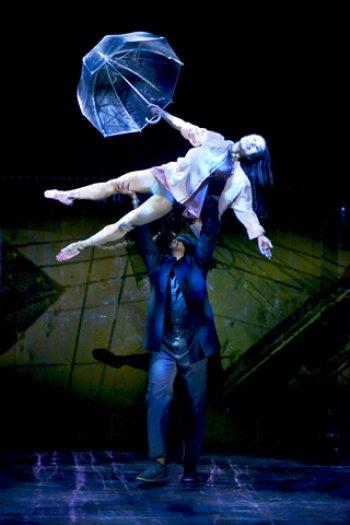 Travante S. Baker and Yukiko Kashiki in a scene from “The Girl with the Alkaline Eyes” (Photo credit: Michael Kushner Photography)

The stage area for Alkaline Eyes is defined on three sides by overlapping vertical plastic panels, the kind used in scientific laboratory clean rooms.  (Set designed by Jason Sherwood.) These panels are artistically flexible enough to become a disco and a posh apartment with the enhancement of Alex Basco Koch’s projections which range from EKG-like squiggles to a street scene and finally the walls of the aforementioned apartment and a street scene.

As the dance play unfolds in a robotics workshop in the future, Oliver (a charismatic Spencer Ramirez) is dressed in chic overalls—brilliantly inventive costumes by Loren Shaw who not only contrived unique robot outfits, but wittily comments on how humans will dress in the future.  Oliver appears to be manipulating dials and doodads as he scoots about the stage.

Troy (Travante S. Baker, boasting a smooth metrosexual appeal and great acting chops) accompanies the Investor dressed in a bright green ultramodern business suit (Jane Abbott, making the most of a small, but vital role).  Their presence generates the first appearance of the two Creations:  the Male (James Koroni) and the Female (Amber Barbee Pickens) who are covered head-to-toe in colorful vinyl and full-head-covering masks.  The two play cyborgs well.

As the Investor studies these robots, a third being appears, Co (the ravishing Yukiko Kashiki), stripped down to a lovely form-fitting beige outfit.  Co immediately attracts the attentions of Troy, not knowing that Oliver also yearns for her.

Travante S. Baker and Spencer Ramirez in a scene from “The Girl with the Alkaline Eyes” (Photo credit: Michael Kushner Photography)

Co and Troy’s affair is brilliantly choreographed, from their first apprehensive touches to the romantic dinner to the colorfully staged disco scene to the passionate coupling in Troy’s apartment.

Oliver, in his hypersensitive state, imagines himself sexually fantasizing about Troy, taking Co’s place in the acrobatic sexual fantasy, which is unexpected but unfolds naturally as Troy, at least in Oliver’s dream state, responds quite positively to the acrobatic sexual antics which mirror those with Co.

Things, of course, get complicated as a major character is revealed to be a robot and is demobilized unceremoniously, leading to an denouement that is staged with beautiful simplicity, reminiscent of the ending of Jordan Harrison’s Marjorie Prime, another work dealing with cyborgs and emotional memories.

Brian Tovar’s lighting and Ryan Rumery’s sound design create constantly changing ambiances that blended well with all the other elements.

Brock and his Chase Brock Experience dancers have taken an oft-told sci-fi theme and made it moving and believable.

The Chase Brock Experience: The Girl with the Alkaline Eyes (through January 13, 2019)

Running time:  70 minutes without an intermission