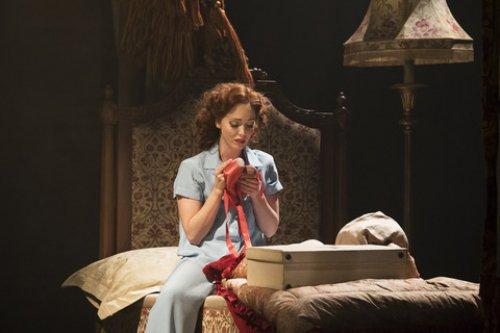 Ashley Shaw as Victoria Page in a scene from “The Red Shoes” (Photo credit: Johan Persson)

Clever is the word that ricocheted through my mind as I watched Matthew Bourne’s dance version of the now mythical ballet film, The Red Shoes, the Michael Powell/Emeric Pressburger classic which turned thousands of young girls—and some boys—towards careers in classical ballet with its deliciously eccentric characters and tragic storyline, based loosely on Hans Christian Andersen’s depressing short story.

The problem is that The Red Shoes, which just finished a too-short run at New York City Center, had no heart or any clear motivation for the plot which, for better or worse, the campy film had in spades.

This version was just one visually fascinating scene after another to a surprisingly apt score arranged from the film music of Bernard Herrmann—some of whose musical themes were repeated too many times as if there wasn’t enough Herrmann music to choose from, particularly the main theme from The Ghost and Mrs. Muir. 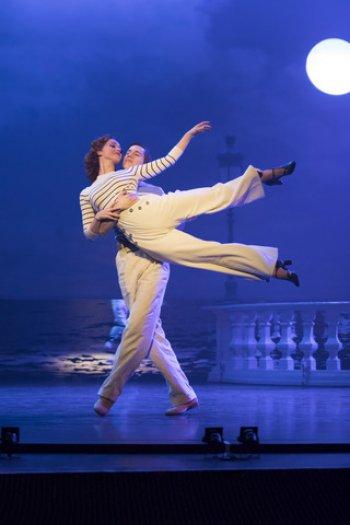 Ashley Shaw as Victoria Page and Dominic North as Julian Craster in a scene from “The Red Shoes” (Photo credit: Johan Persson)

Hanging over this presentation is, as indicated, the film which divides the audience into those who did not see it and must take or leave Bourne’s clever version and those who saw it and compare each of the film’s campy, colorful moments to the dramatically dull Bourne version in which characters seem to fall in love after barely meeting.   Characters who are boldly drawn in the film could not be inhabited by Bourne’s young cast, particularly Nicole Kabera as an unstylish Lady Neston who introduces the main character, her niece Vicki Page (a saucy, plush Ashley Shaw) to ballet owner and Diaghilev surrogate, Boris Lermontov.  This rich character was played by a much too young Sam Archer whose charisma is totally absent.  It’s difficult to stage a story at whose heart is a tragic love triangle when at least one angle had no magnetism and was, in fact, a mass of outrageous eccentricities compared to the seething elegance of Anton Walbrook in the film.

Dominic North, youthful and believably angst-ridden, made a fine Julian Craster, the struggling composer whose ballet-within-the-ballet, “The Red Shoes,” brings him together with Vicki.  However, unlike the film which made sure to put Vicki and Julian together in music rehearsals way before the debut of this ballet, Bourne has them realize their love only after the debut of “The Red Shoes” which is the climax of the first act.

Similarly Bourne’s Lermontov, particularly as performed by Archer, was more petulant and emotionally infantile rather than mysterious and stylish causing the audience to question his magnetic pull on Vicki when he drags her back to the ballet world after she stormed off to be with Julian. 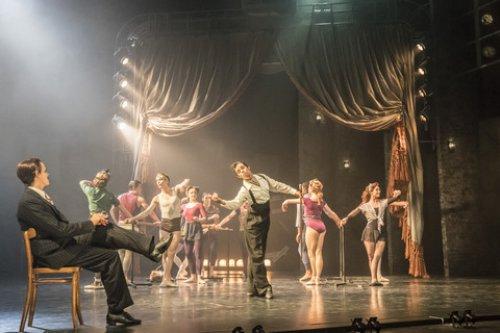 Sam Archer as Boris Lermontov and Company in a scene from “The Red Shoes” (Photo credit: Johan Persson)

Of the other vibrant side characters, Michela Meazza was fine as the Lermontov Ballet’s prima ballerina, Irina Boronskaya, her poisonously jealous stares at Vicki terrifically timed.  Liam Mower played the lead dancer, Ivan Boleslawsky as the very gay fellow he couldn’t be in the 1948 film and Glenn Graham as the ballet master Grischa Ljubov started slowly but was convincing by the end.

The sets by Lez Brotherston (who also designed the chic, colorfully period perfect costumes) featured a brilliant set piece:  a half-finished theater proscenium arch which not only was able to be moved forward and back but also could be rotated, creating numerous, constantly changing playing areas on the stage.  Duncan McLean’s projections also helped define both intimate places and geographical locations.

The problem here is that stagecraft cannot substitute for emotion or psychological insightfulness.