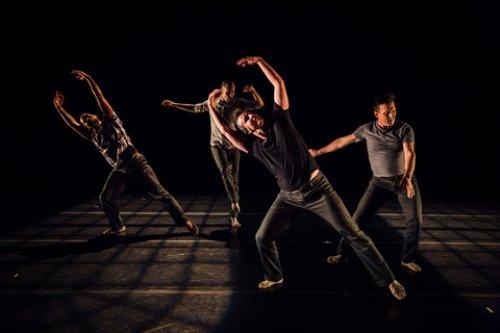 The Joyce Theater, in honor of NYC Pride Week, presented Sean Dorsey Dance in its elegy to those lost in the decades-long AIDS epidemic, “The Missing Generation,” based on extensive interviews and oral history recordings with LGBTQ longtime survivors.  Their words provided an aural tapestry, added to a varied—from gentle folk to disco to symphonic—musical score by Jesse Olsen Bay, Dr. Alex Kelly, Ben Kessler and Jeffrey Alphonus Mooney, to make this a moving hour-long dance/theater work that should be seen by a wide audience.

Sean Dorsey is a transgender and queer choreographer whose movement palette in “The Missing Generation” is a gentle, swirling combination of twisty, floor-bound, organic movements with a rich gesture vocabulary.  Where the revealing series of speeches about gay life previous to, during and after the Epidemic provided the facts, Dorsey’s movements provided the emotions that even the depressing stories couldn’t.  A look, a touch, a quick lift, all turned this cast of mature dancers—Dorsey, Brian Fisher, ArVejon Jones and Will Woodward—into a fount of emotion, sometimes too intense to take in.

Structured as a series of short sections, each defined by a piece of music or a speech, “Generation” opened with Dorsey in semi-darkness, nervously dipping up and down, soon joined by the other three cast members, all wearing simple, dark casual street wear, all walking agitatedly.  A voice spoke of things we have blacked out of our thoughts and also welcomed us to the “most visited” place in the American imagination:  “Our inexhaustible ability to look away.”

Another voice spoke of the changes wrought in a body while suffering from the ravages of AIDS, while the choreographic patterns kept spreading the foursome across the stage and back together again with solo speakers speaking into a microphone down front.  There were several stories of lonely gay youngsters finding freedom of expression—sexual and artistic—in the big cities, particularly New York and San Francisco.  One dancer spoke about the non-stop sexual activity in the latter city, even after the epidemic spread—“So many men, so little time!”  A voice asks, “How can we love again after heartbreak?”

Toward the end, Dorsey asked the audience to imagine the generations that came before as hopelessness slowly morphed into optimism.  By this time, the four dancers were dressed alike in red tees providing a united front.

Running time: 65 minutes without an intermission