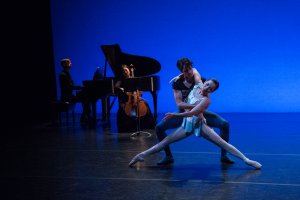 The New York Theatre Ballet has made incredible inroads into the dance culture of New York City since its founding by Diana Byer in 1978.  In the last decade, the troupe has taken on a momentum that has brought it new digs in the East Village and to a very reliable schedule imaginative programming.

Most recently, they added another chapter to their ongoing “Legends & Visionaries” series at New York Live Arts which included four very diverse works by choreographers of varying talents, leading off with a sweet but minor trio, “Chemical Bond,” to a Piano/Cello “Serenade” by Gabriel Fauré and choreographed by Milissa Payne Bradley.  Performed by Amanda Treiber, Mayu Oguri and Joshua Andino-Nieto to live music—as were all the works—played by Michael Scales on piano and Amy Kang on cello, the three formed diagonals, dos-si-do-ing prettily, the girls, dressed in Sylvia Taalson Nolan’s tattered looking tops (the two women) and the gentleman in a simple top and black pants.  Each had a solo; the man partnered each young lady, although no romantic sparks were evident.  “Chemical Bond” is a pleasant opening ballet. 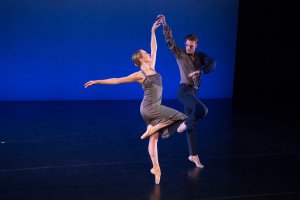 Richard Alston’s “Such Longing,” forces an unfavorable comparison with Jerome Robbins’ “Dances at a Gathering.”  Both use Chopin; both have little folk dance details (folded arms, mazurka steps, etc.) and both present the cast as a microcosmic community.  Two couples, Steven Melendez & Amanda Treiber and Michael Wells & Elena Zahlmann acquitted themselves well, if a tad calmly.  Scales repeated his pianistic duties playing the Mazurka-filled score with sensitivity to the dancers’ needs.   The ballet’s title is a bit of an overstatement since a quiet deliberateness prevailed with all interactions coolly formal.

Each couple had a duet and each dancer had a solo.  There was a bit of mix and matching of the couples, further confusing any romantic undertones.  Mr. Alston is a skilled craftsman with a fine ear for the music’s subtle changes, but the effect was more academic than artistic. 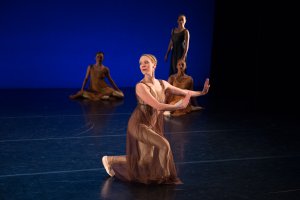 Jerome Robbins’ “Antique Epigraphs” to a lush Debussy score is a perfect choice for the female contingent of the NYTB.  It uses their already fine ballet technique, but forces them to soften up and find their inner sensuality.  Robbins’ imagery combines the friezes on ancient Greek bowls with modern dance plasticity, helped enormously by Florence Klotz’s soft, transparent, pastel tunics. There were references to the original and his own “Afternoon of a Faun.”

Lines of ladies, their arms linked in angular, elbow jutting, softly crossed the stage, leaving off soloists who danced pretty vignettes and then moved on.  Although “Antique Epigraphs” could have used more sensual languor, the NYTB dancers caught the stylization and were musically impeccable. 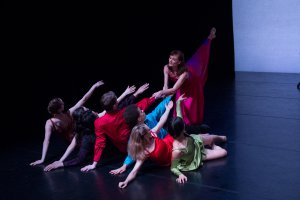 “Song Before Spring,” to a vibrant and pulsating steel band score by Philip Glass is an exciting addition to the NYTB repertory.  Choreographed by Zhong-Jing Fang and Steven Melendez, “Song” caught the rambunctiousness of the score while telling many poignant and funny stories about the characters’—the entire company—lives.  Dressed in Ms. Nolan’s incredibly witty street clothes, these young dancers became a community, a microcosm of urban life as they interacted.  There were a sullen youth (Mr. Melendez), three flirty young ladies (Alexis Branagan, Carmella Lauer, Mayu Oguri), two aggressive young men (Joshua Andino-Nieto and Michael Wells) and a panorama of telling activities that combined ballet, modern dance, mime and very fine acting.  “Song Before Spring” is a real forward leap for Ms. Byer’s troupe of dedicated dancers.