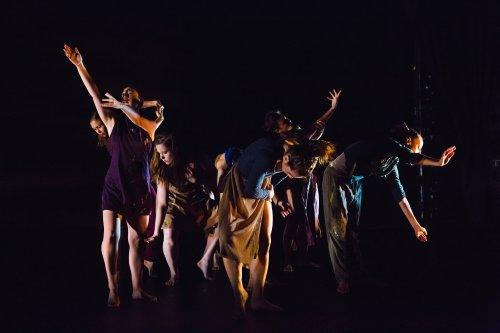 Ten years is a long time to keep a dance troupe together, it’s true, and it’s clear that Ariel Grossman—aka Ariel Rivka (Hebrew for Rebecca)—has the abject support of her husband, David Homan who composes most of the scores she uses for her choreography and the devotion of her all female troupe of dancers all of whom are as one in their clean, strong take on Ms. Grossman’s choreography.

Ariel Rivka Dance celebrated its milestone anniversary with a short season at New York Live Arts, an important theater/school/arts support center. Its theater is a perfect combination of a large performing space and intimate seating.

Ms. Grossman tended toward overuse repetition of movements and arm gestures. Emotional states were supported by little else than the titles and her husband’s gemlike scores. “No Words,” to a score composed and played by Mr. Homan, opened the program. His music sounded like an anguished string quartet to which she made an honest stab at using gesture and arrangement of the eight dancers to express the anger and loss in a poem, “Fury: In Praise of Stone,” by Janet R. Kirchheimer and Jaclyn Piudik, which was printed in the program.

In “Holly,” a solo, was performed by Ms. Grossman who barely moved from one spot. She swayed and dipped. Although not in tiptop shape, she offered a calm surface and a twisty body. 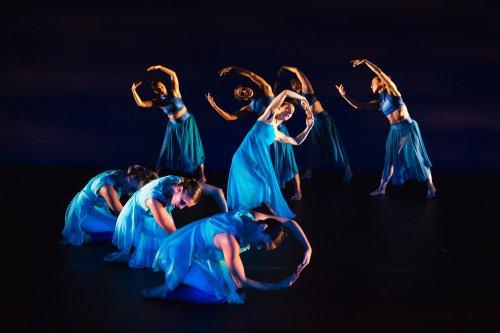 Of the three other works on the program, “Undertow,” another full company work, had the feeling of a micro-society whose classes were determined by the length of the lovely, diaphanous blue outfits designed by Keiko Voltaire, from long to short. Similar costumes tended to be grouped together, lining up against each other in interesting formations. This choreography flowed the best of the other works, even better than the final work of the program, the most demanding: “Variations on a Box,” in which the dancers, in t-shirt type tops and dark pants (by Mondo Morales) raced about the stage happily in Ms. Grossman’s most kinetically varied movement vocabulary. Their happiness was kind of catchy and their dedication to all the crisscrossing and sudden sculptural groupings that communicated a pleasant village feel.

Marika Kent, Ms. Grossman’s lighting designer, added depth and feeling to the choreography with her subtle play of light and shadow. 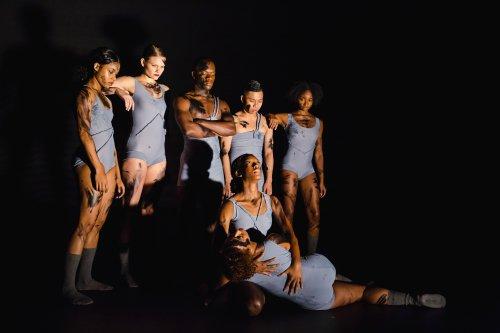 Amidst the five ballets by Grossman—two were NYC premieres—was one by guest artist Chanel DaSilva, which, although flawed, was more exciting than Ms. Grossman’s contributions. DaSilva’s “SUSAN,” to a score written by herself, Michela Lerman and Ulysses Owens Jr., was a generic “Rite of Spring”-type ritual set in some unidentifiable period where people stomped and pushed each other about. Although DaSilva never set up any psychological basis for all the menacing and hinted at violence, her cast of eight, including three men, dashed with confidence through the work. Although the lighting and costume designers for “Susan” weren’t credited, both were mood enhancing.

Ariel Rivka Dance is clearly a well-established institution with a following and it is clear why. Her dances speak with a simple language that is lucid if not always subtle, but she knows how to use her dancers, Mr. Homan’s scores, and her designers. However, Mr. Homan should consider not narrating the program with his personal insights and comments about the ballets. His appearance is not professional and turns the program into a lecture demonstration.

Running time: 90 minutes including one intermission