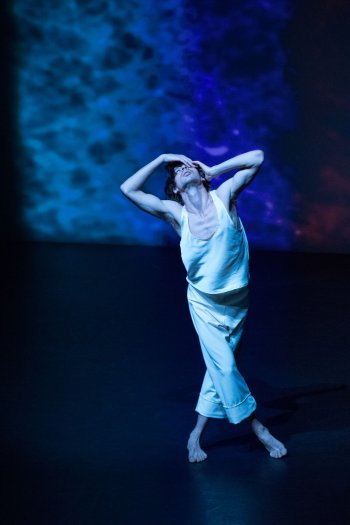 A member of ZviDance in a scene from “MAIM (Water in Hebrew)” at New York Live Arts (Photo credit: Heidi Gutman)

Somehow, in under an hour, Gotheiner managed to dredge up memories and images of his early life on a kibbutz and how valuable water was in the life of his community.  That, added to the current climate crisis’ causing drastic drought concerns, stimulated him to produce MAIM (Water in Hebrew).

The back wall of the intimate New York Live Arts theater was turned into a screen upon which Josh Higgason’s projections were shown: arid lands, everyday representations of water running into sinks and beautiful, but eerie, undersea flora and fauna floating and billowing.

Dressed in Gabrielle Grywalski’s simple, pale, sleeveless outfits, the dancers entered, immediately performing the main movement motifs of Maim:  a soft, flat-footed run; quick, nervous kicks; palms held out (as if to feel for rain); unison activity (helping to create a sense of community); and partnered bits that focused on the inner turmoil of individuals.

The dancers kept sweeping across the stage, often pausing to form circles and lines as the dreary, scorched landscapes appeared behind them.  Their bodies communicated the tension under which this community lived.  Furtive glances and tight shoulders revealed sadness and dread.

As more definably contemporary projections appeared the dancers seemed to calm down, their movements smoother, poses held longer.  Finally, in a moving finale, they formed a line in the front of the stage, aligned with a strip of light that beautifully illuminated the glasses of precious water each dancer held.  (The beautiful, truly illuminating lighting was by Mark London.) 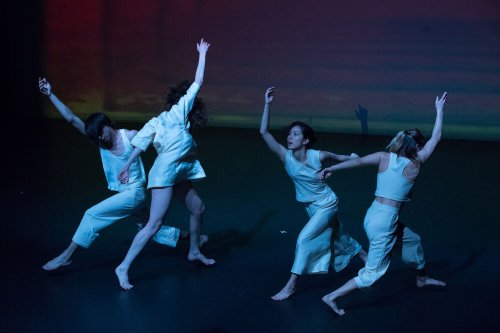 Members of ZviDance in a scene from “MAIM (‘Water’ in Hebrew)” at New York Live Arts (Photo credit: Heidi Gutman)

These glasses of water, aligned on the strip of golden light became both optimistic icons and warnings of their possible disappearance forever.

The dancing was superb, Gotheiner bringing together disparate body types and forging them into a true company.

Although it is probably unfair to praise one dancer over the others, Michael Wang impressed me for one lovely moment in which he gently held a stretched out pose while the others flailed quietly on the other side of the stage.

MASIM (Water in Hebrew) displayed Zvi Gotheiner and his ZviDance at the top of their form.

Running time:  45 minutes without an intermission