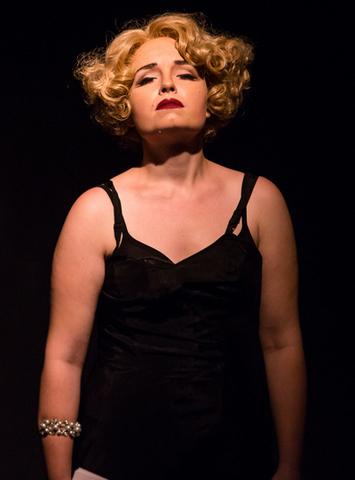 Dietrich Rides Again, a new play with music by Oliver Conant and Justyna Kostek—starring the latter—proposes a new, fresh look at the diva movie and stage star Marlene Dietrich. Although it’s clear that great effort and research went into the work, it is still just an elaborate—albeit energetically performed and intermittently entertaining—celebrity imitation and not very illuminating.

On a multi-tiered set that takes advantage of every square inch of the tiny Medicine Show Theatre—designed by the authors—Ms. Kostek narrates Dietrich’s life story, from middle-class childhood in Berlin to theater and cabaret actress to Hollywood star and on to her virulent anti-Nazi activities and beyond, clearly telescoping some of the events for convenience. (Did Dietrich’s audition for the great director Max Reinhardt really lead to performing at his cabaret the very next day?)

Along the way, she performs songs associated with Dietrich such as “Falling In Love Again” from The Blue Angel, “The Boys in the Backroom” from Destry Rides Again (the inspiration for the play’s title) and, most obviously, her theme song, “Lili Marlene.” 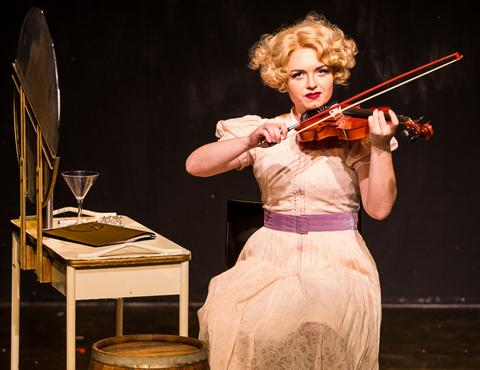 Ms. Kostek has fun with the songs, but mostly sings off-key, I assume purposely, in a bizarre attempt at evoking Dietrich – but Dietrich actually sang quite well. She certainly growled and made witty fun of her limited vocal talents, but she sang with style…and, on key. Also, Kostek’s accent isn’t precisely German, leading to some odd, non-Marlene cadences.

Kostek has chosen to end every scene with an artificial pose that made it clear that she was more interested in getting applause for her efforts rather than seeking to explore Dietrich’s complicated psyche. (It was almost impossible not to think of Madeline Kahn’s classic Lili Von Shtupp from Blazing Saddles.)

One could get pretty much everything Dietrich Rides Again offers by reading the biography in the program, looking at the many photographs in the lobby and listening to recordings of Dietrich singing.

There is, however, one wonderful scene in which Marlene, in the course of one song, learns everything she needs to know about film acting, lighting, poses, makeup, hair and publicity from her mentor, Josef von Sternberg, a Jew who was forced to leave Germany, taking Marlene along with him to Hollywood. 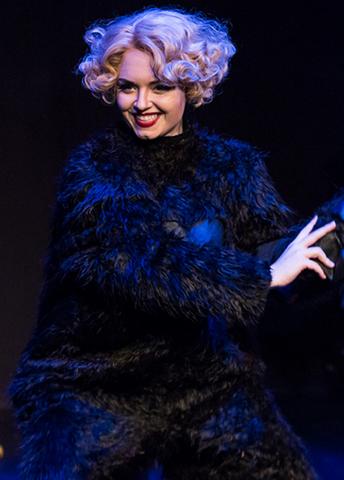 The Dietrich-style wig—actually a hairstyle she adopted later in life—was designed by John Burgos who should know how to camouflage the very obvious wig border. The costumes, on the other hand, are quite posh for an off-Broadway affair, ranging from robes to elaborate dresses to the gorilla costume from Blonde Venus—all designed by Derek Nye Lockwood.

There is also a problem with the chronology of the songs. “The Laziest Girl in Town” is from the 1950 film Stage Fright and not in the early thirties.

Jono Mainelli is the superb pianist, music director and arranger. He good-naturedly takes all the ego bashing insults that Dietrich throws at him, yet provides excellent support for the songs and an almost continuous brilliant musical ambiance.

Mr. Conant’s direction is big on moments, but not so good on tempo and substance.