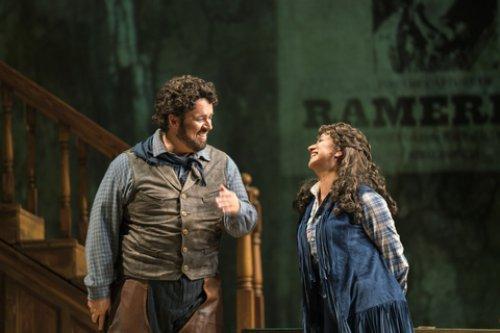 Ivan Stefanutti’s production is solid but old-fashioned and traditional except for huge projections that fill the back wall of the three sets, some which work and some which don’t. Conducted by James Meena, Opera Carolina’s general director and principal conductor, with a cast led by soprano Kristin Sampson in the title role, both the orchestra and cast gave a sturdy though only intermittently exciting performances in this unusual Italian opera.

What may be the only opera set in the American Wild West until now, Fanciulla is based on a David Belasco melodrama, just as was Madama Butterfly, the Puccini opera that preceded it. The first commission by the Metropolitan Opera for a new work and premiered by the Met in 1910 with an all-star cast, the opera was successfully received but has been only rarely revived. The prime reason may be that the opera has very few arias, but is more like spoken dialogue set to music, the probable reason why there is never a highlights album of the score.

In addition, there is only one major female role, and cowboys singing in Italian may not be everybody’s idea of Americana. Finally, the score is somewhat different from other Puccini works as the influence of Claude Debussy and Richard Strauss can be heard. Nevertheless, it has many highly theatrical moments and a rousing final curtain. Puccini himself thought this was one of his best works.

The opera takes place at the foot of the Sierras in 1849-50 during the California Gold Rush. Minnie, the owner of the Polka Saloon and only Caucasian women in the mining camp, is pursued by married Sheriff Jack Rance who doesn’t interest her, while all the other goldminers vie for her attentions. Ashby, the Wells Fargo agent, reveals that he and his men are closing in on the notorious bandit Ramerrez and his gang. When a stranger, “Dick Johnson from Sacramento” arrives, Rance is suspicious but Minnie recognizes him as a man she men on the road to Monterrey and had fallen into unspoken love. However, he is here to rob the miners’ gold but calls off his gang when he recognizes her. Once again smitten, Minnie invites him to her cabin later that evening. 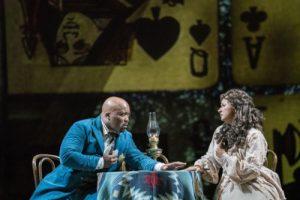 Although Johnson is at first too forward with her, he finally behaves like a gentleman when he discovers that she can take care of herself and tells her his story which rouses her compassion. The posse led by Rance and Ashby arrive hot on his trail but Minnie denies having seen him. However when they tell her that Johnson is Ramerrez just as they are leaving, she turns against him. He is shot trying to leave her cabin, before Rance returns to search for him again. Minnie and Rance play poker for his life. All meet again in the Redwood Forest six weeks later for the dramatic finish.

The minimal sets by Stefanutti (who also designed the costumes and was co-creator of the projections with lighting designer Michael Baumgarten) failed to fill up the stage of Jazz at Lincoln Center’s Rose Theater. Instead huge slide projections, often changing during the acts, take up the back wall. In the first act, the wooden beams and wanted poster for Ramerrez work fine. However, in the second act when the projections segue from the snowscape outside Minnie’s cabin into fanciful designs with the playing cards in the poker game they become a bit comical and get unwanted laughter as they appear to fall off the wall. In the third act, the view of trees and snow turn into a verdant valley which goes from monochrome to color, a rather trite, sentimental concept for the melodramatic ending. Stefanutti’s costumes are period historic, though Sheriff Rance’s electric blue suit makes him look too dandified for his job.

As Minnie, Sampson (who has appeared in the NYCO’s recent 2016 Tosca and Respighi’s La Campana Sommersa in the spring of 2017) makes her a force of nature, a feisty, spirited woman who is afraid of nothing and knows exactly what she wants. She has a big, forceful voice which fills the house, although at times her top notes were a bit shrill. While tenor Jonathan Burton as Dick Johnson (a role he sang with Opera Colorado recently) is less swashbuckling than compassionate, he makes him a boyish, sympathetic character, if not the cutthroat head of a feared gang. He lushly wraps his voice around the Italian notes of the libretto and he and Sampson make beautiful music together in their first act duet as well as their impassioned third act finale, among the few arias in the opera. 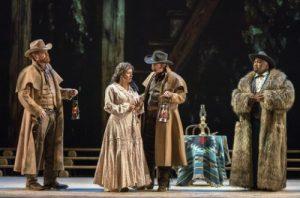 Baritone Kevin Short, on the other hand, who was rather stolid as Sheriff Rance made him an old-fashioned villain from melodrama and had a flatness to both his acting and singing as though the role doesn’t fit him very well. Baritone Alexander Birch Elliott as Sonora, bass Christopher Job as Ashby and mezzo-soprano Hyona Kim as Wowkle, Minnie’s Native American servant, gave able support in their smaller roles.

La Fanciulla del West is an absorbing opening for the New York City Opera’s second full season, partly because of its novelty, its unusual story line, and its theme made more famous by Andrew Lloyd Weber in The Phantom of the Opera. The adventurous season continues with mainstage productions of the New York premiere of Martinez’s Cruzar la Cara de la Luna (the third opera in the Ópera en Español series), Montemezzi’s rarely staged L’Amore dei Tre Re, and the U.S. premiere of Wuorinen’s Brokeback Mountain from the story by Annie Proulx (the second opera in City Opera’s LGBT Pride Initiative).

Chamber operas to be staged include the New York premiere of Picker’s Delores Claiborne from the novel by Stephen King, in a newly adapted chamber version, and an unusual pairing of Donizetti’s Il Pigmalione and Rameau’s Pigmalion, a NYC premiere for Donizetti’s first opera. Ironically, the San Francisco Opera, an equally adventurous company, will premiere this November John Adams and Peter Sellars’ new opera, The Girls of the Golden West, a modern take on the women of the Golden Rush from historic documents.

Broadway at 60th Street, in Manhattan