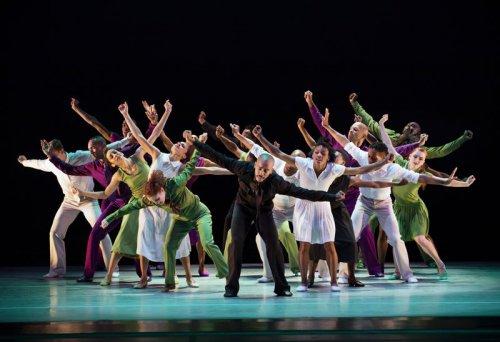 The extraordinarily popular Alvin Ailey American Dance Theater is back for its umpteenth season at the New York City Center.

Three recent works showed off all aspects of these fine dancers:  their technical proficiency, command of drama and the ability to show off their own personalities while subsuming themselves into the company ethic.

“r-Evolution, Dream.,” the final work on the program, hasn’t improved in a second viewing.  Choreographed by company member Hope Boykin, it is a naïve and obvious work that is elevated by a large cast of gung-ho dancers, led by the buoyant, elegant Ailey veteran, Matthew Rushing.  Acting as a stand-in for the choreographer, Rushing led the many small groups—sleekly costumed in white, red, green and black (designed by Boykin) —onto the stage, each to different jazz music (composed by Ali Jackson) looking like refugees from West Side Story.  One section, in which all the differently colored groups interact, even has a Dance at the Gym feel! 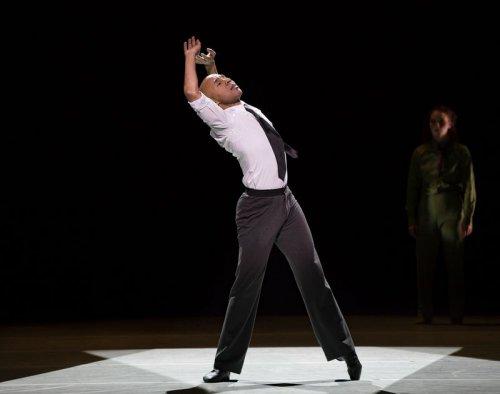 Boykin uses recordings of the Tony Award winning actor, Leslie Odom Jr. reciting—beautifully, of course—a series of excerpts from the works of well-known, mostly black, writers and Shakespeare, which emphasize the concepts of dignity, generosity and hope.  This only made the work feel even more didactic and clichéd.  Al Crawford’s lighting, however, did what it could to add drama and, yes, color to this ballet.

Megan Jakel, a tiny, red-headed dynamo, stood out in a spinning solo towards the end of “r-Evolution, Dream.” and Matthew Rushing was no slouch as the very busy Pied Piper.

“Deep,” choreographed by the international favorite Mauro Bigonzetti, opened the program on a darkly dreamy note.  Set to a somber score by Ibeyi that included vocals, “Deep” was a beautifully structured work, exquisitely lit by Carlo Cerri. The chic black costumes were designed by Bigonzetti, himself. 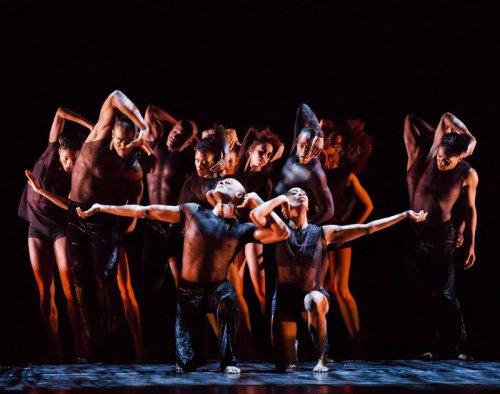 It opened with a sensual all-female trio and ended with the same three dancers performing the exact steps, except that they now managed to bring the entire cast of sixteen together after a series of struggles, anxious duets and ominous groupings.

The middle work, “Walking Mad,” choreographed by the Swede, Johan Inger, has inadvertently taken on an urgency and timeliness.  Always a surreal study of off-handed violence, the current tidal wave of sexual harassment revelations has given “Walking Mad”’s series of violent episodes against women an added shock value.

Beginning as a jaunty comedy, a dancer strolling down the theater aisle in an oddly formal outfit, including a bowler hat, the ballet soon becomes a battleground defined by a long, very tall wooden fence designed by Inger.  The fence, which has several doors, could be bent, turned and even collapsed. 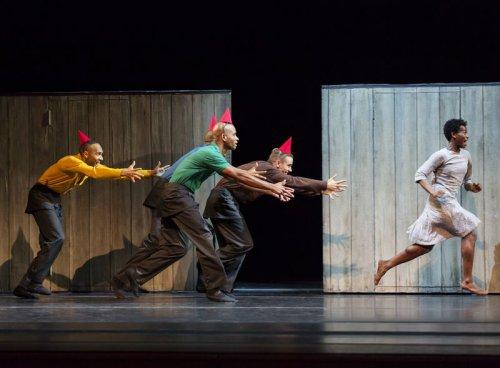 Soon three women, Sarah Daley-Perdomo, Jacqueline Green and Ghrai DeVore, dressed in plain dresses, are at first innocently pursued by six men, dressed rather formally.  (Costumes by Inger.)  Before long the women are tossed about, pummeled and even tossed over the fence, all to a frenetic version of Ravel’s “Bolero.”

In a counter-intuitive, but brilliant, move, Inger ends the work with a very dark duet performed by Daley-Perdomo and Vernard J. Gilmore to what has become a ubiquitous score by Arvo Pärt.  She can’t get away from his unwanted touches and is worn down until she is little more than a ragdoll.

The two dancers’ intensity kept a sold-out audience absolutely quiet until the lights faded.  This was a rare combination of steps performed perfectly and acting that was heartbreaking.