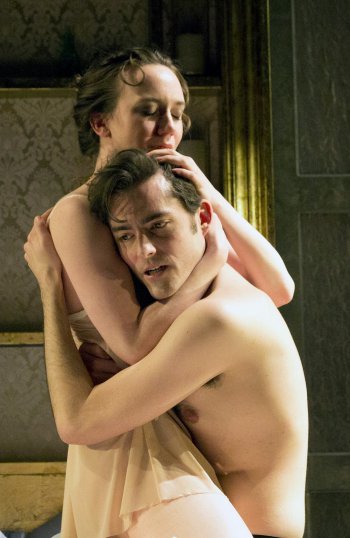 Amelia Pedlow as Annabella and Matthew Amendt as Giovanni in an intimate scene from the Red Bull Theater revival of “Tis Pity She’s a Whore” (Photo credit: Richard Termine)

We associate Jacobean revenge tragedy with the reign of King James I. Each play’s atrocities seemed to dare the next playwright with an unspoken “Can you top this?” Playwright John Ford continued the genre under the next king, Charles I, coming up with new and even more lurid variations. Red Bull Theater which specializes in the plays of Shakespeare and his contemporaries is offering a staging of Ford’s rarely revived masterpiece ‘Tis Pity She’s a Whore. While artistic director Jesse Berger has piloted a solid production which is a good introduction to this unfamiliar play, it all seems a bit tame when the script seems to cry out for tremendous excesses. As always, however, with Red Bull productions, the diction in this revival is impeccable and totally intelligible.

Shakespeare’s Romeo and Juliet was about a forbidden love lived in secrecy. In Ford’s drama, he pushes the envelope even further making the hero and heroine brother and sister. Their consummation leads to the play’s tragedy for many of the characters. When Giovanni of Parma develops a passion for his unmarried sister Annabella, he convinces her to act on this feeling with the exhortation, “one soul, one flesh, one love, one heart, one all.” Although wooed by three suitors (the noble Roman gentleman Grimaldi, Lord Soranzo (a nobleman of Parma), and the foppish and inane dandy Bergetto), Annabella initially rejects them all. However, when she becomes pregnant with Giovanni’s child, he recommends that she marry the best of the suitors posthaste.

Unfortunately, after the wedding, Soranzo immediately discovers his wife is already pregnant and prepares for his revenge. The play also deals with several subplots, the revenge of Soranzo’s castoff mistress Hippolita, Signor Donado’s attempt to teach his immature nephew Bergetto the art of courtship, and Hippolita’s missing husband Richardetto, believed to be dead, who masquerades as a doctor in order to spy on the other characters. This is a world of adultery, betrayal and treachery, but incest is beyond the moral sphere then as now and tragedy is the only possible outcome.

Berger’s production is fine as far as it goes. However this play cries out for a more assertive, aggressive approach as all the characters protest they are perfectly in their rights to follow their nefarious goals. Only Ryan Garbayo’s amusingly juvenile and asinine Bergetto and Kelley Curran’s hot-blooded and jealous Hippolita have the right tone for this over-the-top play. As the lovers, Matthew Amendt and Amelia Pedlow are convincingly devoted to each other, demonstrated by their nude scene in Annabella’s bedroom. However, Amendt continues to be too callow and artless even when he is wallowing deep in incest, while Pedlow remains too meek even when events have turned her into a woman and changed her destiny. 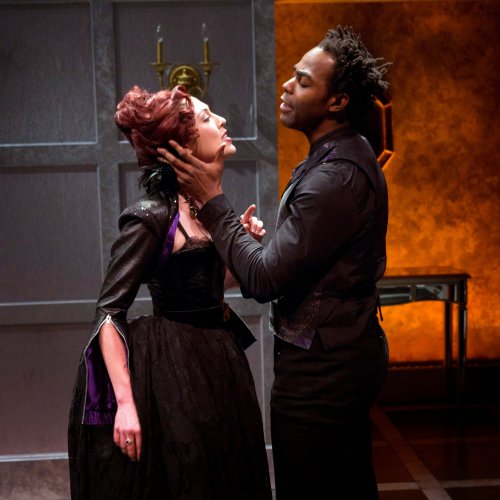 Kelley Curran as Hippolita and Clifton Duncan as Soranzo in a scene from the Red Bull Theater’s revival of “Tis Pity She’s a Whore” (Photo credit: Richard Termine)

As Lord Soranzo pushed to fury when he finds he has been cuckolded, the impressively built Clifton Duncan is stalwart but wooden even when plotting his revenge. Everett Quinton is amusing as Bergetto’s censorious uncle but remains a bit too deadpan throughout. As Friar Bonaventura, outraged confessor to Giovanni, Christopher Innvar is impassioned but rather perfunctory in his disapproval. Derek Smith’s role of Vasques, the opportunistic and devious servant to Soranzo, grows in the course of the evening. Franchelle Stewart Dorn as Annabella’s tutoress with the strangely apt name of Putana, is droll as a woman who rolls with the punches. In the small role of the sinister and corrupt Cardinal, nuncio to the Pope, Rocco Sisto appears to be in another play than the other characters but that may be the fault of the writing.

The muted Elizabethan unit setting by David M. Barber with its many doors, inner room with Annabella’s bed chamber, and a balcony for characters to overhear various private conversations allows for an easy transition between scenes. While Sara Jean Tosetti’s costumes appear to mix 17th century and modern elements, only Bergetto’s outrageous and dandified ensembles and Annabella’s gowns (red, pink, white) which tend to parallel her moods add anything to the overall tone of the production. Even the fight choreography from the usually reliable Rick Sordelet and Christian Kelly-Sordelet seems strangely muted.

Early in its history, Red Bull Theater began with an extravagant and theatrically overblown production of Thomas Middleton’s The Revenger’s Tragedy which proved to be exhilarating theater. John Ford’s ‘Tis Pity She’s A Whore is equally extreme. It is regrettable that with this rarely seen tragedy Red Bull Theater has chosen to play it so safe when a more radical approach would have been twice as effective. The production remains a beautifully spoken, lucid and clear staging of a play that ought to have more shock value.