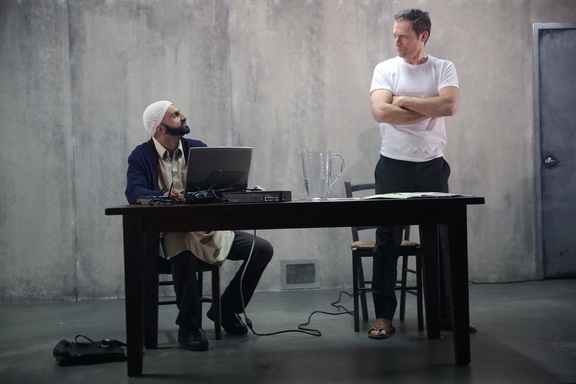 Pakistani-American playwright Ayad Akhtar has been having a very good year. His second play, The Who and the What, had its premiere this summer at Lincoln Center’s Claire Tow Theatre as part of the LC3 season. His 2013 Pulitzer Prize winner Disgraced reopened on Broadway on October 23 at the Lyceum Theatre to critical acclaim. And now New York Theatre Workshop is giving the New York premiere of his play The Invisible Hand, under the direction of Ken Rus Schmoll. While the first two plays took place in the United States, this new play takes place in Pakistan. The play suggests that the roots of terrorism are not religious but monetary.

Nick Bright (Justin Kirk), a minor American investment banker working for Citibank in Pakistan, has been mistakenly kidnapped instead of his boss, a high-ranking official. While his wife attempts to negotiate the $10 million ransom with the Pakistani rebels led by Imam Saleem (Dariush Kashani), the U.S. government puts the Imam on a terrorist list making this impossible. Nick offers to use his personal offshore account in Grand Cayman to raise his ransom by playing the stock market at which  his job has made him expert. However, the deal is that he will not be allowed near a computer, but will have to convey his directions to his captor Bashir (Usman Ally), a very bright English-raised Pakistani, who will place his trades for him. Bashir proves to be a very quick learner.

The title “the invisible hand” comes from economist Adam Smith. It was his theory, accepted by many, that individual greed works as a corrective to the marketplace, ultimately benefiting society more than if regulated by governments. Akhtar’s play ends up not being a hostage drama so much as a lesson in economics, how traders use information to game the market, how corruption and self-interest rule. And the play demonstrates how the larger the sum to be gained, the more corrupt people and governments become. While the topic is compelling, the play has too many similar scenes, either of playing the stock market or of terrorizing Nick in order to keep him in line. Not only would the play be more effective if it was a bit shorter, it has a totally unnecessary intermission that breaks the mood somewhat.

While Schmoll’s direction is polished and smooth, the play only intermittently has tension: we very quickly figure out that the play can’t kill off Nick or there would be no story. Kirk is fine as the frightened investment banker who loves the thrill of the game. Ally’s Bashir, an Englishman turned revolutionary, is suitably cynical, arrogant and intense. Dariush Kashani as the Imam is regal and dignified as he reminds us that money is the opiate of the people, not religion. As Nick’s young rural captor, Jameal Ali is at times amusing, at other times brow-beaten and tense.

The concrete bunker designed by Riccardo Hernandez is atmospheric, though at times it seems a bit too large as a prison cell. On the other hand, Tyler Micoleau’s lighting design which extends over the audience is extremely effective. The costumes by ESOSA are bland but appropriate. Leah Gelpe’s sound design give the feeling of drones constantly flying closer.

In The Invisible Hand, Ayad Akhtar, the Pulitzer Prize-winning author of Disgraced, has widened his focus to the international scene. This suggests a deepening theme; however, the play is also more diffuse and overwritten that his others to reach New York. While Ken Rus Schmoll’s direction is efficient and skillful, neither it nor the play builds the tension that is inherent in the storyline. Nevertheless, Akhtar is a playwright to watch, one who is increasing his scope in each of his plays.

Running time: one hour and fifty minutes with one intermission