Florian Zeller is the most famous French playwright you probably never heard of. He won France’s highest theatrical honor, the Moliere Award, in 2011 for his play, The Mother, and the Moliere Award again in 2014 for The Father. This latest named international hit is currently running in both Paris and London with major stars in the leading role. Manhattan Theatre Club now brings the Christopher Hampton translation to Broadway with Frank Langella in the title role. As André, an 80-year-old man beset with dementia in which his reality keeps shifting, Langella turns in a virtuoso performance. You may be confused, you may be shocked, you may disturbed, but you won’t be bored for a moment.

André’s divorced daughter Anne visits his apartment to tell him that he can’t keep insulting and firing aides as she is moving to London and won’t be nearby to do his shopping or stop in. In the next scene, there is a different Anne who insists she has not married and has not been out to buy a chicken. In the third scene, André tells the new aide Laura that he has been a tap dancer, but his daughter corrects him: he was an engineer. Missing his watch yet again, Andre states, “I’m worried. I’m losing all my things, everyone’s just helping themselves. If this goes on much longer, I’ll be stark naked. Stark naked. And I won’t even know what time it is.”

What’s going on? In an extraordinary sleight of hand, we are seeing Andre’s world from his point of view as memory slips away and is replaced with illusions. As in all dementia, it follows a pattern: first Andre starts losing things, then he thinks that people are stealing from him, next he can’t recognize people or things, eventually he begins hallucinating encounters that have not happened, and finally he doesn’t even recognize his surroundings.

As his world closes in on him, illusion consultant Jim Steinmeyer makes pieces of Scott Pask’s elegant set design disappear. At first you don’t notice it, and then large portions of the set that were filled before become empty making it very obvious, a metaphor for the state of André’s mind. Donald Holder’s lighting design includes flashing lights around the stage used during the scene changes, as one by one the lights go out, just as parts of André’s brain are impaired. Catherine Zuber’s costumes are in shades of black and charcoal grey, the color of the world in which André is now living. 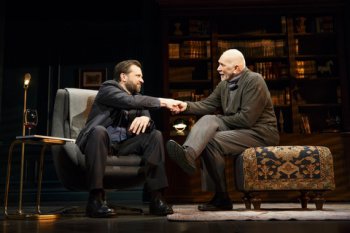 In the hands of a consummate artist like Langella, the play is terrifying as you think “There but for the grace of God go I.” Commanding, sarcastic and troubled, his André is a towering portrait of the lion in winter, fighting with all his might for his sanity and life as he knows it. His performance is modulated through all the gradations as André slips further and further away from sanity as he once knew it. He is on stage through most of the play and it is an exhausting role as we see him at various stages in this 15 scened play.

Although the rest of the cast of six have nothing as momentous as Langella’s role, they acquit themselves well with roles that remain mysterious as André either can’t remember who they are or conjures them up. As Anne, Kathryn Erbe, best-known as Detective Alexandra Eames on Law and Order: Criminal Intent, is both sympathetic and concerned. Hannah Cabell’s Laura is a cool and unflappable aide who has seen and heard it all before as it has been her long-time career to help people in distress. Brian Avers is a suave and enigmatic Pierre, Anne’s friend whom André can’t recall meeting. As a series of other characters that make periodic appearances, Kathleen McNenny and Charles Borland are very different in each of their several roles.

Marking his ninth MTC production, director Doug Hughes has piloted the play with a sure hand, keeping everything as minimalist as the text which resembles Pinter crossed with Ionesco. British playwright Christopher Hampton, the official translator of another French playwright, Yasmina Reza, has created a lucid, clear incisive text.  After Frank Langella’s bravura star turn in Florian Zeller’s The Father, we are sure to get to see one of Zeller’s other nine plays in New York, most likely The Mother or The Truth, which have already been translated by Hampton for their London productions.