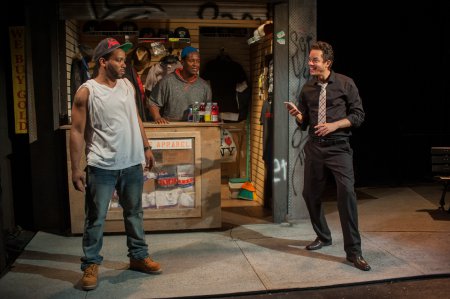 The Block by Dan Hoyle is a frank and uncompromising look at a group of South Bronx locals who hope to escape the patterns of their pasts. Despite their efforts, this group of five always seems to find themselves back on their old block, once again back to square one and perpetually looking for a new way out.

The northernmost borough of the Greater City of New York, the Bronx, is culturally linked to a dangerous and impoverished lifestyle, and The Block pulls no punches in its depiction of the State of the Union up North. Whether through a passionate monologue about the challenges of growing up in the projects, a reflective moment of respect for a friend lost in the battle for the streets, or an expletive filled argument full of vulgarities and amiably delivered racial slurs, the discourse of Hoyle’s latest is vivid and moving.

The band of characters that make up the cast of five in this tale of the streets each embody a different aspect of what it means to be impoverished. Dontrell (Clinton Lowe) as the block native that lived upstate for a few years with his ex-girlfriend, is back to familiar territory after things didn’t work out as planned and he caught his girl cheating on him. A former ex-con, Lowe’s Dontrell desperately wants to make money the right way, but has had more luck finding trouble than anything else. Though an ex-con, Lowe is a charming actor whose sincerity makes Dontrell likeable and relatable, despite his checkered past.

In his trip down memory lane, Dontrell runs into Moe and Rick–two old friends and South Bronx locals who never left the hustle while he was upstate, “playing house.” Nathan Hilton plays Moe, an African that moved to America to start a business, who now runs a corner concession stand selling discounted New York sports apparel and the thirst-quenching Vitamin Water. Hilton’s Moe is the most sensible member of the trio, and his grounded performance provides a father-like presence among the crew. Rick–a private driver for celebrities–is energetic and ambitious but his friends also see him as flakey and unreliable. Flaco Navaja’s turn in the role is full of excellent physical comedy and jarringly funny one-liners. 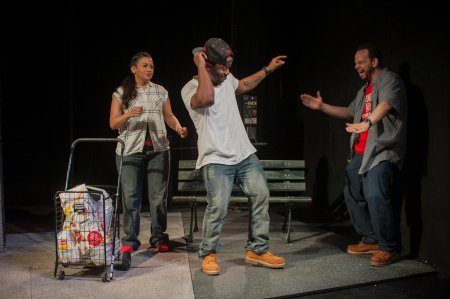 Soria, an old acquaintance of Dontrell’s, is a Puerto Rican lesbian that has been living on the block since the 1960’s. A storyline that many long-term New Yorkers can relate to, Soria lives in a dirt-cheap rent controlled apartment–and has for the past forty years–and her landlord is neglecting the building on top of doing everything else in his power to get her out. Yvette Ganier–who plays Soria–is a moving actress, a woman with a deep well of emotions at her use, and a powerful presence on stage that makes her supporting character not so easily forgettable. Rounding out the cast is Robert Jimenez’s Eddie, a slightly delusional ex-junkie and walker of the streets who carries around a portable speaker–a prop that also serves as an organic way for music to be incorporated into the production. Though his role is limited, Jimenez makes the best of his time on stage and provides a heartfelt yet angst filled performance.

Director Tamilla Woodard, who faced with rapid fire text and cultural references, does an excellent job of managing the very different and specific characters that inhabit the play. Each character is clearly and individually sculpted on stage, and the interactions between said characters are organic. Further, the way in which the humor and pathos fold into each other is so natural it is hard to imagine the dialogue was once only a script on paper. The pacing is spot on–the play runs a crisp 90 minutes, and the transitions are done in a way which makes it believable that any of the characters could be walking down the street and bump into one of the others.

The scenic design by Raul Abrego, though simple, is clever. The set is Moe’s humble storefront, a graffitied over concession stand which is–to say the least–modest in its appearance. Next to that is a beaten park bench and street lamp, and the whole set is laid on top of a faux concrete panel to complete the picture. In line with the design of the set are Sarita Fellows’ costumes which are befitting of the impoverished characters wearing them. A distressed t-shirt, baggy jeans or a Yankees track jacket can be seen on any of the characters throughout the course of the play.

An all-around tour-de-force, Dan Hoyle’s The Block is a stark portrayal of the times at hand in the Bronx. Though things have changed somewhat since the dangerous days of the 1960’s, the borough is still going through a major shift which has yet to be completed. Filled with interesting, thoughtful and sympathetic characters, this is a play that offers a harsh glimpse of some people’s realities, and that in itself inspires very real self-reflection. Complemented by excellent direction and seamless production design, the characters of The Block leave one with the sense that though the struggle seems–at times–absolutely insurmountable, every day is a new opportunity to escape the past as long as one holds onto that most sacred trait: hope.