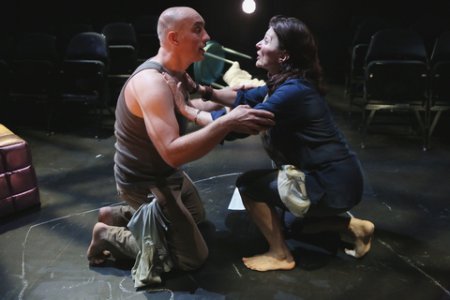 Don’t go to see the stage production of The Birds now at 59E59 Theaters expecting to witness Alfred Hitchock’s version or even a literal presentation of the 1952 Daphne du Maurier short story. While du Maurier’s post W.W. II story was inspired by fears of the Blitz and Hitchcock’s version was a horror story, Irish playwright Conor McPherson’s adaptation for Dublin’s Gate Theatre is a psychological story of encroaching paranoia and claustrophobia. While McPherson’s previous plays to reach our shores like The Weir, The Seafarer and Shining City have all been ghost stories, this is something quite different.

Unlike the original short story which was set on a rural farm in Cornwall, England, and the film which was reset in Bodega Bay, California, the play takes place entirely in the main room of an isolated house in New England. Stefan Dzeparoski’s production which puts the audience in the same room with the characters has its strengths and weaknesses making this an evening of mixed success.

Diane and Nat, two middle-aged strangers, have met on the road and have taken refuge in an abandoned house near a lake to protect themselves from the continued attacks by birds of all kinds. She is a former novelist, and he has suffered from bouts of physical violence and headaches and had been hospitalized a year earlier. As time passes, they run the risk of running out of food and water, while the radio news goes off the air and then the electricity stops working. No help comes and they are unable to find any other living people in their trips to find food during the six hour periods when the birds are silent and not visible, but they are aware of a farmer across the lake. 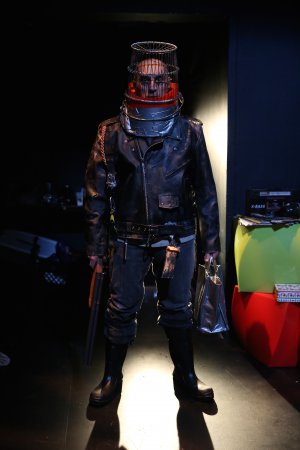 Then Julia, one of the twenty year old marauders from town, comes to them for shelter as she has been attacked by a man in her hiding place. Strangely, she quotes from the Book of Ecclesiastes when it suits her purposes and reads The Bible. The air becomes tense as she sees Diane as her rival for Nat. Diane catches her in lies, and things go missing. Then while Julia and Nat are out looking for food, the farmer from across the lake arrives with a warning about Julia. Which of them will snap first?

In Konstantin Roth’s scenic design, the audience sits in the four corners of the tiny black box at 59E59 Theaters with the action taking place in front and around them. As a result the audience is extremely close to the action. Unfortunately, Dzeparoski has the actors give very broad performances which seem rather hammy up close. Ien DeNio’s sound design includes the intermittent cawing of the birds and their attacks on the window and the walls but are not heard often enough to be truly scary.

The voice-overs in the script, Diane’s journal entries, are performed by her on a visible microphone which makes the production rather stylized as do the black and white video design by David J. Palmer of the birds and their attacks on the windows. In addition, all the audience is aware of the other members at all times which is an uncomfortable reminder that we are watching a play. These directorial choices make it difficult to lose one’s self in the story of these three trapped characters who are fighting for their lives.

First seen in the nude, Tony Naumovski has a powerful physical presence. His Nat is always on the edge and seems capable of violence. His rising desperation is palpable. Antoinette LaVecchia as the calmer Diane is often cynical and sarcastic, while she can be maternal and caring when she chooses to be. Mia Hutchinson-Shaw’s Julia is a self-involved and selfish youth, hedonistic, and seemingly only out for herself and her desires. Under Dzeparoski, these three have little chemistry, diluting the possible interactions between them. The lighting by Kia Rogers is never as spooky or as moody as it ought to be considering the threesome are trying to conserve their fuel and power.

Nevertheless, this story of claustrophobia in the face of the apocalypse is absorbing. With actors within touching range of the audience, the play has an immediacy that few stage performances have. However, this version of The Birds never becomes a thriller or a horror story. One has to look to its psychological elements for its dramatic effect.