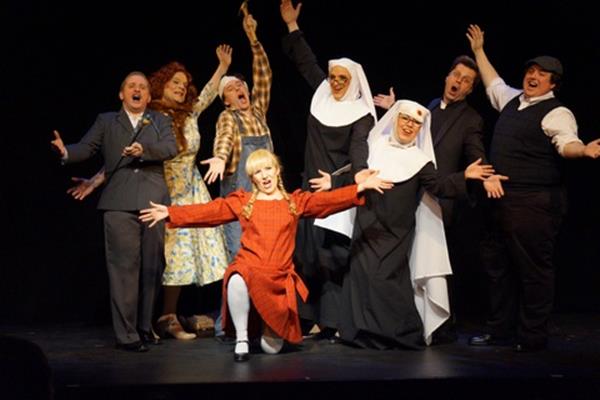 Director Lawrence Lesher and cast have hit the ground running Off-Broadway this Christmas season with the first revival of Todd Michael’s The Asphalt Christmas. Theatre Row’s Lion Theatre awaits those daring and looking for a Christmas story less caramel coated this year with an audacious play, both shocking and entertaining, as The Exorcist comes to St. Celestine’s and their annual Christmas pageant.

If you are wondering what a drag queen mother, a possessed child and an ex-vaudeville priest are doing in a Christmas show, you are not alone. At a first glance after a somewhat wanting exposition, it seems the playwright forgot he was writing a Christmas piece. However, you’ll soon be swept up in preparation for the impending Christmas pageant in Sister Mary Burnadette’s (David L. Zwiers) charge. A sensational turn of events promises to leave you in hysterics as Sister Joseph (Courtney Cook) and Sister Bernadette try to maintain the sanity of the habit amidst the ensuing chaos. Leave your expectations of a heartwarming nativity play at the door; laugh at the one-liners, the absurd costume changes and this larger than life Christmas farce.

Alex Pappas is the true savior of the night as he takes on four different characters (you’re forgiven if you get confused a little bit). Included in his talents is the drunken Father McLaughlin slightly too inebriated to give the wise spiritual counsel he is sought out for and the loveable yet repellent groundskeeper Willard of whom you would gladly keep your distance. The only weak performance is Father O’Day (Chris Kateff) who is given many opportunities for conscience and internal conflict – lust, the possession of an orphan child, and the running of a parochial school – yet gives an unconvincingly vacant performance.

What is most clever about the play is that without pandering to our Christmas sensitivities Michael keeps true many themes that embody the Christmas spirit. Themes of family coming together couldn’t be more prevalent where two burlesque dancers (one now reformed into the hilarious Sister Bernadette) meet only to realize they are long lost sisters with a niece and daughter they thought an orphan. The only problem is that she is slightly possessed by the devil. They even managed to slip in a wedding proposal and bouts of passion from the most unlikely of character. Sinners are redeemed and exonerated and this oddball family finds their own Christmas peace.

The costumes designed by Zwiers (who also plays Sister Mary Bernadette) brought character to the play which is running with a very minimal set. We were impressed by the humorous quick changes.

Tread lightly and suspend your expectations when challenging yourself to see this comic piece of theatre. There will be plenty of time for you to watch Miracle on 34th Street and reruns of Home Alone if this play doesn’t do it for you. I must applaud the cast and crew for their conviction and commitment to such sensational character and circumstance.