Richard Alfredo’s The Dark Clothes of Night, a brilliant parody/homage to film noir and hardboiled fiction, the third play of Summer Shorts – Series B, is so good it alone is worth the price of admission. The other two plays which precede it in this year’s 10th Festival of New American Short Plays have interesting but undeveloped premises. But The Dark Clothes of Night is an instant classic, a humorous satire that is also a brilliantly theatrical study in paranoia, fear and evil and the elements that made film noir irresistible. Directed by playwright Alexander Dinelaris, the three actors in this memorable short work play multiple roles with assurance, style and aplomb.

The Dark Clothes of Night is a brilliant pastiche of Raymond Chandler, Dashiell Hammett and Mickey Spillane with a big dollop of the plot of The Big Sleep thrown in. Burke Sloane is a tough-guy private eye investigating a case of two wealthy sisters so alike even their father can’t tell them apart. Professor Rob Marlowe is lecturer in Film Noir and the femme fatale but having marital problems at home with his wife Sylvie who finds him too wrapped up in his work. Alternating between the two stories and using the same actors in astonishing quick changes, the play’s two plots merge until we don’t know if Sloane is a figment of Marlowe’s imagination or vice versa. With pungent, gritty dialogue, witty exchanges and clever puns, The Dark Clothes of Night is a memorable evening of film and theater. 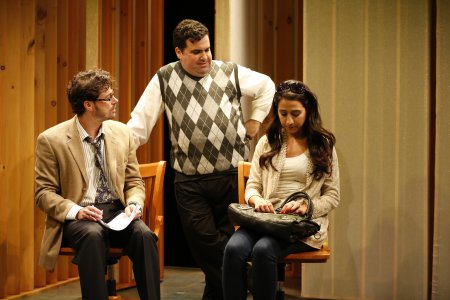 The play uses only three very talented actors playing 12 roles. Dana Watkins plays private eye Burke in a performance worthy of Humphrey Bogart, Dick Powell or Robert Mitchum, while his Professor Marlowe has the nerdy edge of the college intellectual. As the pace speeds up, the assured Watkins is able to change characters simply by doffing his hat. Sinem Meltem Dogan segues delightfully between the identical, dangerous and seductive twins Delilah and Delia, Marlowe’s star pupil Emily, his disaffected wife Sylvie, and a malevolent nurse. James Rees plays all of the other men including a professor, a police detective, two psychiatrists, and the women’s dotty father confined to a wheelchair. All three demonstrate tremendous versatility and a flair for the theatrical. Dinelaris’ direction is smooth as silk and twice as entertaining. Although the physical setting doesn’t change much, the mood is created by Daniel Mueller’s pitch-perfect projections, and the lighting by Greg MacPherson is pure film noir. 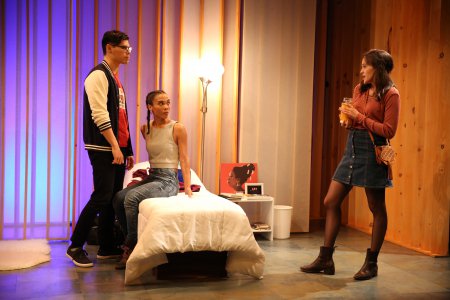 Idris Goodwin’s Black Flag has an up-to-the minute premise that could have been ripped from the headlines. When Caucasian Sydney from Georgia and African-American Deja from Detroit find themselves paired up as roommates in their first semester at a New York City university, Sydney asks if she can put up a Confederate flag that her mother gave her to remember her heritage – if it is on her side of the room. Wanting to be conciliatory, Deja agrees but it burns her up. At four scenes covering six months, the play takes too long before the expected confrontation and resolution. The audience seems to be way ahead of the characters. As the roommates, Francesca Carpanini as Sydney and Suzette Azariah Gunn as Deja suggest the emotional and physical distance between them but don’t flesh out their underwritten characters. Ruy Iskandar is more successful as a Korean American who precipitates the clash between the women.  Logan Vaughn’s direction feels like a series of stops and starts without creating a tense mood. 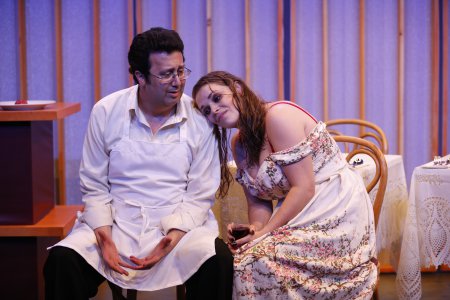 Queen, a one act by Dinelaris, has a fascinating pedigree. It is inspired and adapted from Nobel Prize winner Gabriel Garcia Marquez’s “The Woman Who Came at Six O’Clock.” Although Dinelaris has transferred the setting from a Spanish setting to an American one, the mostly faithful stage version resembles Garcia Marquez’s original  without being as successful as the printed version. In trying to take some of the mystery and eroticism out of the plot, Dinelaris has removed much of the color and details from it instead. Queen, a prostitute, visits Joe’s café every evening at six o’clock for the last three months for a free meal. However, tonight is different. Knowing that Joe is in love with her and has a reputation for absolute honesty, Queen turns the conversation to whether Joe will give her an alibi for 5:45 PM. And then in walks a police detective.

As directed by Victor Slezak, Saverio Tuzzolo as Joe and Casandera M.J. Lollar as Queen establish their characters as world-weary people who have known each other a long time. However, the play doesn’t allow them to delve much deeper. As the detective Mike, Chris McFarland makes his presence felt though he only appears for about a minute.

Amy Sutton who designed the costumes for all the plays in Series A and B has the most fun with the hilarious and multiple costume changes for The Dark Clothes of Night where identities keep shifting. Rebecca Lord-Surratt’s unit set, also used for both evenings, is quickly adapted to the necessary settings. Nick Moore is credited with the sound design as well as the moody music for the film noir parody.

One-act play festivals have their own built in entertainment value as you are bound to like at least one of the several offerings. In Summer Shorts – Series B, The Dark Clothes of Night, playwright Richard Alfredo makes dazzling use of the elements of film noir for a stage version that is a splendid send-up of the genre in a mere 30 minutes.

Summer Shorts 2016 – Series B (performed in repertory with Series A through September 3, 2016)