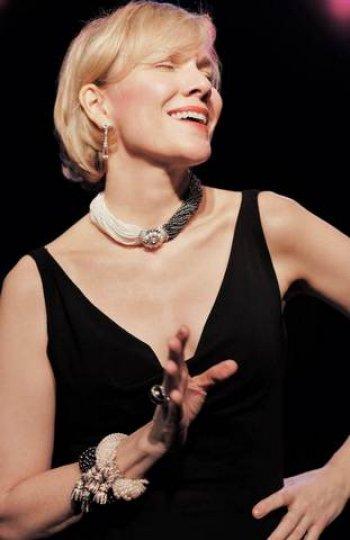 Stevie Holland as she appears in “Love, Linda” (Photo credit: courtesy of the production)

If basking in Cole Porter songs isn’t enough, Stevie Holland has written a clever and moving biography of Cole Porter and his legacy as seen through the eyes of his wife and muse, Linda Lee Porter, calling it Love, Linda.

Using 19 famous and not so famous songs to propel Linda’s fascinating life story, Holland takes total control of the Triad Theater as she recounts their lives from the halcyon early days to the pain and pathos of her last days.

Dressed in a chic low-cut, sleeveless black dress (designed by Pamela Dennis), her blonde hair in an attractive bob, she muses about Linda’s posh socialite childhood and doomed marriage to Edward Russell Thomas who abused her continually.  (Ironically, he was the first automobile driver to cause a fatal traffic accident.)  Their divorce in 1912 not only set her financially for life but opens her up to meet Cole Porter in 1918—segue to “So In Love”/”What Is This Thing Called Love?”.

Elegantly inhabiting the small Triad stage, Holland’s Linda is clearly a class act, with a smooth, rich, dark voice.  Hearing her tale of their days in the twenties cruising the high points of Europe, the culturally historical figures they carouse with—including Diaghilev, Chanel and Stravinsky—and Cole’s early successes are fascinating:  cue “Ours,” “I Love Paris,” “Miss Otis Regrets” (written for the legendary Bricktop in whose boîte the Porters hangs out with their fun-loving, rich friends) and the adorable “Scampi,” the triumphant tale of a mischievous shrimp.

As their marriage matures, Linda is caught between her love for Cole and his extramarital flings with men, particularly his infatuation with the handsome dancer/artist Boris Kochno in the 1920’s in Venice where the Ballets Rousses is in residence (“In the Still of the Night”).

Porter’s Broadway successes leads to a call to Hollywood where Linda has to admit to herself that Porter’s dalliances with the “tanned adonises” of California are too much for her, leading her to depart to Paris and to an ironic, acid “Let’s Be Buddies,” returning after Porter famously suffers a horse riding accident in which his legs were crushed.  Linda admitts that “life was hell.”

Linda’s tale also includes, unbelievably, an unsuccessful attempt at motherhood which saddens her.

Holland’s Linda is a strong presence, quietly elegant and self-possessed.  She never overdoes the emotion.  It is all communicated in song and subtle physicality, the emotions flooding Holland/Linda’s eyes, communicating her anguish to the back of the theater where I sat.

Dennis Parichy’s lighting is sensational, sensing every nuance of mood of the scenario and making each song a little work of art with fadeouts artfully timed.

Gary William Friedman’s musical arrangements are smart and surprising, often turning Porter’s songs—along with Holland’s wise libretto—upside down, like using “My Heart Belongs to Daddy” not as a cute love ditty, but a song of self doubt and twisting the sad “Love for Sale” from a tired appeal of a prostitute to a plea for love.  Holland’s vocal chops easily handle all the songs with panache.

Richard Maltby, Jr., the esteemed songwriter and director (Ain’t Misbehavin’) guides the show with a fine sense of the emotional impact of Holland’s script and the re-imagined song arrangements.

But, in the end it is Stevie Holland who deserves the accolades for taking a familiar story and turning it inside out.  Her revelations of Linda’s shared life with Cole Porter and her sultry, emotionally focused singing make Love, Linda a must see for fans of the great American Songbook who want something different.