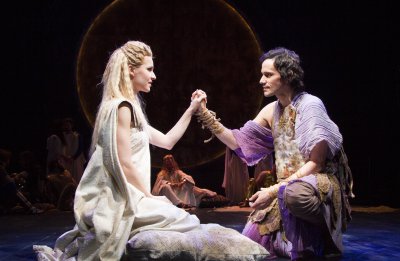 Trevor Nunn, former artistic director of both the Royal Shakespeare Company and Britain’s National Theatre, has directed 32 of Shakespeare’s plays but has never staged the late romance, Pericles, or worked with a U.S. theater company before. He has corrected this omission with his production of Pericles at Theatre for a New Audience’s Polonsky Shakespeare Center.

Nunn’s adaptation rearranges some of the scenes and adds material from a prose version of the work by George Wilkins, believed to be Shakespeare’s collaborator. Using music, song, dancing, jousting and a veritable rainbow of colorful costumes, he has created an epic-sized revival that is always eye-filling and easy to follow. While some of the acting is uneven in this large cast of 29 including seven members of the PigPen Theatre Co., it must be said that this is not one of Shakespeare’s best plays as it makes use of unexpected events, many locations, and a large canvas, rather than psychological depth and deathless poetry.

Pericles is called a “romance” as it travels all over the Mediterranean, covers many years in the lives of its characters, offers its hero and heroines many trials and tribulations, and has a rather miraculous happy ending. As an adventure story, it resembles Ulysses’ journey in Homer’s The Odyssey or that of 18th century picaresque novels in which the episodes have no particular structure but all the leading characters meet up again at the end.

As a young man, Pericles, Prince of Tyre, travels to exotic Antioch, Tarsus, Pentapolis, Ephesus and Mytelene. Along the way he acquires a wife (Thaisa, daughter of King Simonides), a daughter Marina (whom he leaves with the Governor of Tarsus and his ambitious wife), and loses both, only to be reunited with them 16 years later. Along the way we encounter a riddling contest, shipwrecks, a tournament, a brothel, and many betrayals. Shakespeare’s play uses a narrator, medieval poet Gower, who this production gives new and diverting songs by Irish composer Shaun Davey.

Christian Camargo, who has previously appeared in New York in Hamlet, Coriolanus, Romeo and Juliet, The Tempest, and As You Like It, plays the title role. Fine with the Shakespearean verse, Camargo is a rather bland hero until the second half of the play when he plays an older man and then shows us the depth of Pericles’ emotion. As his daughter Marina, Lilly Englert (who made her stage debut as Hermia at TFANA in Julie Taymor’s A Midsummer Night’s Dream) becomes more impassioned the more we see of her. Gia Crovatin is a lovely, spirited Thaisa, but unfortunately Shakespeare does not give her much stage time. 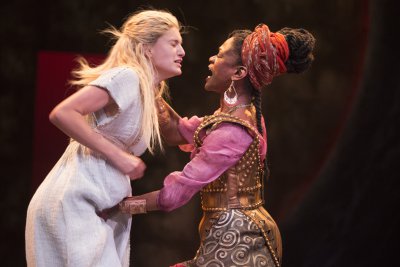 While Will Swenson, known for his fine dramatic performances in such musicals as Priscilla Queen of the Desert, Hair, 110 in the Shade and Murder Ballad, is surprisingly stolid as Cleon, Governor of Tarsus, Nina Hellman as his wife Dionyza attacks her juicy evil role as if it were Lady Macbeth. Oberon K.A. Adjepong, Patrice Johnson Chevannes and John Keating are salacious and wanton denizens of the brothel in Mytelene; however, their languid ladies are not the least bit erotic. As Lysimachus, the Governor of Mytelene, Ian Lassiter plays the part for all it is worth. Raphael Nash Thompson makes welcome appearances as the story teller Gower.

Constance Hoffman has cleverly designed the costumes for each country in a different color which makes it not only an aid to following the plot but adds a great deal of spice to the stage pictures. The scenic design by Robert Jones uses the full thrust stage as an open playing area with needed props carried in. However, the back wall contains a huge circle with bronze doors that split apart to reveal various locales and skyscapes, turning the stage into multiple locales. Stephen Strawbridge’s lighting design varies with the changes of place and the many moods of the story.

Other important members of the production team are fight director J. Allen Suddeth, music director Charlie Reuter, and choreographer Brian Brooks. The live background music is provided by John Blevins, Philip Varricchio and Jessica Wang in a box on stage right. The onstage music is provided by the team of seven from PigPen Theatre Co. who also double as actors playing knights, sailors, pirates, etc.

While Trevor Nunn’s concept for this Pericles is at times tame as though he was consciously creating family entertainment, it is always accessible and lucid, a plus for a rarely staged Shakespeare play. The large cast acquit themselves well and the long running time proves no obstacle to enjoyment. Ultimately, the final recognition scene is quite moving. This is a good introduction to Shakespeare’s late plays for those who are unfamiliar with the so-called romances.

Theatre for a New Audience