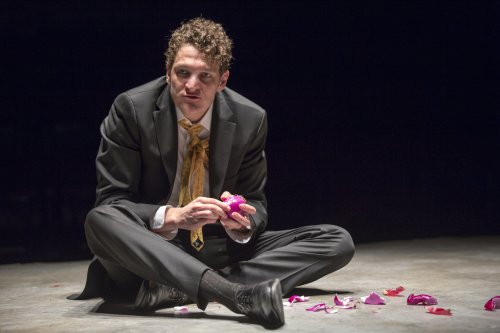 Don’t go to the Classic Stage Company expecting to see Ibsen’s 1867 Peer Gynt. John Doyle’s production and adaptation is something quite different. Doyle has eliminated the pageantry, spectacle and scenery, reduced the huge cast to seven actors, and turned the poetry in the text into prose. While Ibsen’s unwieldy verse script in five acts is reputed to take between five and six hours if staged in toto, Doyle’s version runs one hour and 55 minutes without an intermission. With Gabriel Ebert’s Peer center stage and the other actors often on the sides of the rectangular platform (in David L. Arsenault’s basic scene design) around which the audience sits on four sides, this version comes across as an audio play for voices. It will not be to everyone’s liking. However, others may find the new interpretation brilliant.

Peer Gynt is a liar, adventurer, fantasist, poet, seducer and egoist. The original play told the life of this anti-hero (part Norwegian folklore and part fictional) from young manhood to death, traveling all over the world as he meets women and abandons them, becomes rich and goes bankrupt, eventually returning to his home town in Norway. When originally staged, it had a score by Edvard Grieg that has become world famous in a suite that is still popular today. The only way to do justice to Ibsen’s text would be in a film version which could accomplish all of the special effects and scene changes called for. 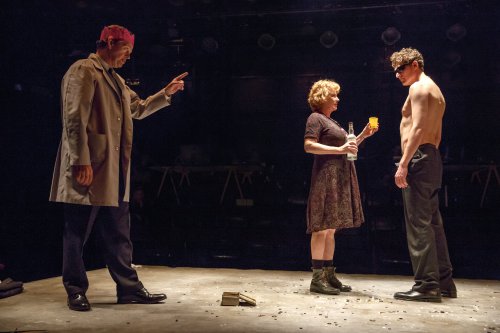 Aside from the titular hero, Doyle has created generic figures for the other six actors who shift characters from scene to scene playing selections from the 43 named characters in Ibsen’s text: The Mother (played by Becky Ann Baker), The Doctor (Dylan Baker), The Bride (Jane Pfitsch), Solveig (Quincy Tyler Bernstine), The Undertaker (Adam Heller) and The Bridegroom (George Abud). Only Ibsen’s creations of The Boyg and The Button Moulder retain their names, along with Peer and Solveig. While Ebert demonstrates his range being on stage throughout in an energetic and brisk performance, he never makes the character larger than life which the story implies. The other actors are mostly the same in all of their various roles.

As with many CSC productions, the modern dress costumes (here designed by Ann Hould-Ward) are entirely in black, gray and white. A small handful of props are used (a tin of buttons, an onion) but the production is basically reduced to its dialogue and story. Since there are no breaks of any kind, the scenes segue one into another without transitions. As a result the audience has to stay focused on the play or it finds itself somewhere new and doesn’t know how it arrived there. The lighting design by Jane Cox alternates between light and dark without creating much atmosphere on the empty stage.

John Doyle has turned Ibsen’s epic Peer Gynt into a kind of Everyman morality play which demands total concentration from the audience to follow this stripped down version. While Ibsen’s first four acts are drastically cut, the fifth act which seems to show Peer’s redemption is given extended play. Some will find this a fascinating reinterpretation of an unwieldy classic. Other will find that the approach is tediously too much of the same. However, this is a rare chance to see one of Ibsen’s early plays before he switched to the social dramas that he is known for today.

Running time: one hour and 55 minutes with no intermission