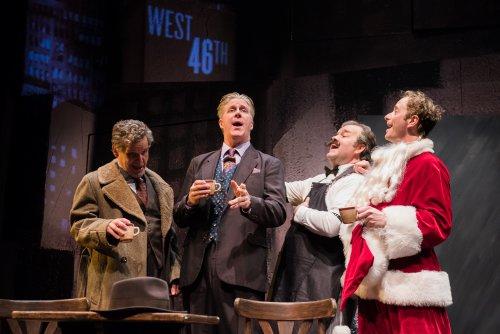 Just in time for Easter, TACT/The Actors Company Theatre has adapted and combined  two Christmas-themed Damon Runyon short stories into the seasonally inappropriate, but nonetheless very charming, Three Wise Guys. Gleefully peppered with Runyon’s distinctive demi-monde argot, or Runyonese, the comedic play depicts a Prohibition-era New York of principled crooks and hustlers who, in true Runyon style, end up having hearts much bigger than their ill-gotten bankrolls, which, of course, doesn’t mean they’re ready to commit to their matrimonially frustrated gal pals. Like another Runyon adaptation about some guys and dolls, the sparsely musical Three Wise Guys fancifully speaks to the, perhaps not so unreasonable, belief that those on the make are much more trustworthy than the ones who’ve already made it.

As the play begins, two members of its eponymous trio are holed up in a speakeasy on Christmas Eve, 1932, with severe cases of the holiday blues. Seeing the end of his livelihood on the legal horizon, broken-hearted bootlegger Blondy Swanson (Karl Kenzler) is lamenting giving up the girl of his dreams (Victoria Mack) for the fading fortune of small-time rum running. Meanwhile, expert safecracker The Dutchman (Joel Jones), decked out in a Santa suit, is trying to make some quick cash to pay off a sizable gambling debt. They are soon joined by Dancing Dan (Jeffrey C. Hawkins), who is as light on his feet, and in his temperament, as his nickname suggests.

But Dancing Dan actually has the biggest reason to worry because he’s fallen for a long-legged lovely (Mack) who has also caught the eye of Heine Schmitz (John Plumpis), an especially humorless gangster. Rather than letting the lady decide, Schmitz prefers to just eliminate the competition which encourages Dancing Dan and his two steadfast buddies to hit the road. Though, thanks to a couple twists of fate, they’re only able to make it as far as Long Island. 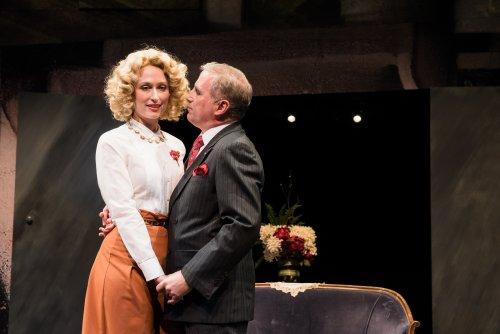 As their caper-filled night unfurls, the trio easily passes between low and high-society, along the way encountering a hot-to-trot society matron (Dana Smith-Croll), her resourceful manservant (Ron McClary), and a host of others on the social spectrum, including, of course, the still unamused Heine Schmitz. The protean supporting cast–Mack, Smith-Croll, McClary, and Plumpis–does double, triple, and even quadruple duty in providing a roster of well-defined characters that never suffer from the limitation of identical faces.

A note in the program from TACT’s artistic directors informs us that the group is disbanding after 25 years, so that watching Three Wise Guys is a bittersweet experience. As this final production demonstrates, theater is at its best when as many talented artists as possible have a chance to shine, which the highly stylized world of Damon Runyon–an inspired closing choice–certainly provides. Under the sure-handed direction of Scott Alan Evans, who co-wrote the play with Jeffrey Couchman, the crew’s indelible contributions include a vibrantly impressionistic cityscape from Jason Ardizzone-West, which is beautifully accentuated by Bart Fasbender’s evocative sound design, Dan Scully’s remarkably well-integrated projections, and David Toser’s period-perfect costumes. 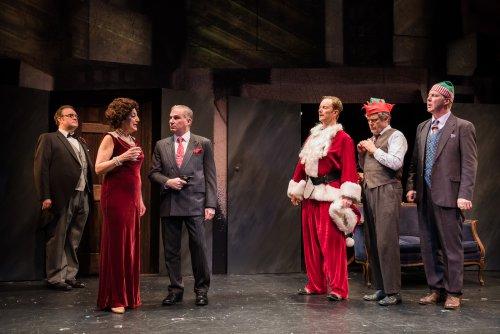 And, then, there are the silhouettes. With a huge assist from puppeteer Andy Gaukel, figures materialize on clothesline-hung sheets to tell sizable chunks of the story. It’s a bit of highwire theater-making that leaves you a little breathless and considerably in awe.

Clocking in at a breezy 85 minutes, Three Wise Guys doesn’t come close to overstaying its welcome. But there is a sense that Evans and Couchman want to send us to the exits before we’ve had time to think about the plot holes they couldn’t quite fill after mashing together the two Runyon stories. My advice? Just sit back and enjoy the con.

Running time: one hour and 25 minutes with no intermission