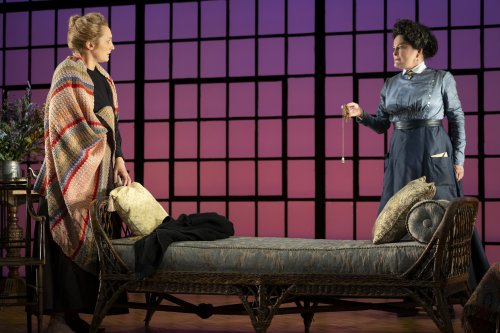 Francesca Faridany and Kate Mulgrew in a scene from Lauren Gunderson’s “The Half-Life of Marie Curie” presented by Audible Theater at the Minetta Lane Theatre (Photo credit: Joan Marcus)

In 1911, Polish-born French physicist Marie Curie was awarded the Nobel Prize in Chemistry for her work in isolating Radium and Polonium. She should have been ecstatic as the first woman to win it twice and (still today) as the only woman to win it in two categories having jointly won the Nobel Prize for Physics in 1906 with her husband Pierre Curie and Henri Becquerel for work in radiation.

Unfortunately, at the same time an international scandal broke revealing her year-long affair with colleague and fellow physicist Paul Langevin, a married man who was separated from his wife. While Langevin was simply called “an unfaithful husband,” the widowed Madame Curie, and the greatest scientist in Europe, was vilified as a “homewrecking harlot,” “a foreign mistress,” “an immigrant whore” and “a disgrace to her country.” Unable to leave her house because of the angry mobs outside her door, she was on the verge of a nervous breakdown, still suffering from the accidental death of her husband five years before. Like the radium that she isolated, Madame Curie felt she was undergoing a half-life: “the moment an element transforms so fully that it is more other than itself.”

According to Lauren Gunderson’s fascinating two-character play, The Half Life of Marie Curie, at this moment her friend and fellow female physicist, British electrical engineer and widowed Hertha Ayrton arrives and insists she go back to England with her to recuperate at her seaside summer home in Highcliffe-On-Sea, along with her two daughters. Traveling under her maiden name, Curie arrives at Hertha’s country house for the summer of 1912, with her two daughters Irene and Eve to follow. 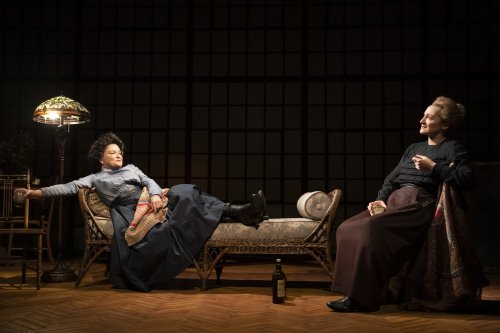 Kate Mulgrew and Francesca Faridany in a scene from Lauren Gunderson’s “The Half-Life of Marie Curie” presented by Audible Theater at the Minetta Lane Theatre (Photo credit: Joan Marcus)

Hertha nurses her back to health – except for the radium poisoning which would eventually kill her and gave her pains in her back and side. The women talk of science, their lives, their highs and lows, their daughters, and their happy marriages. Marie has been asked by the Nobel Prize committee not to show up to accept her award for chemistry due to the scandal, but her friend insists that she put in an appearance. Hertha recalls almost getting in the Royal Society for her book on the electromechanics of arc lighting until they discovered that not only was she a woman, but she was a married woman who legally had no rights in British law at that time.

Director Gaye Taylor Upchurch has cast two wonderful and contrasting actresses as Marie Curie and Hertha Ayrton: Francesca Faridany (the teacher Siobhan in The Incident of the Dog in the Night-Time) as Marie Curie, and Kate Mulgrew (Katharine Hepburn in Tea at Five, Captain Janeway in Star Trek: Voyage, Galina “Red” Reznikov in Orange is the New Black) as Hertha Ayrton. Sporting a convincing Polish French accent, Faridany is prey to the fears and doubts of a woman going it alone in a field that was made up almost entirely of men in a country not her own. Wearing her heart on her sleeve, she runs the gamut of emotions from exultation to the depths of depression. She is a sympathetic and winning character and fully three-dimensional, unlike so many biographical characters on stage.

As Hertha Ayrton, Mulgrew is a force of nature, not cowed by anything and certain there is a solution to everything. A famous suffragette who has been to prison many times, she still has a positive outlook on life even though as a woman in the Edwardian age she is denied many of the same rights and honors as men. Witty and sardonic, Mulgrew’s Ayrton almost overshadows the retiring and modest Curie with her bigger-than-life portrayal of a woman afraid of nothing – except the sample of radium that Marie wears as part of a necklace. We see her cajole Curie, rage over injustices to females, wax rhapsodic over nature, and reveal many details of her life as a self-made woman. Mulgrew is unforgettable as a woman once famous who has fallen by the wayside of neglect. 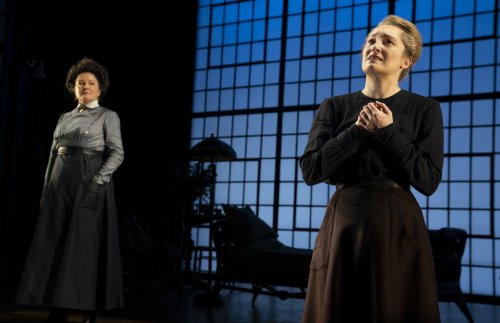 Kate Mulgrew and Francesca Faridany in a scene from Lauren Gunderson’s “The Half-Life of Marie Curie” presented by Audible Theater at the Minetta Lane Theatre (Photo credit: Joan Marcus)

Rachel Hauck’s versatile unit set fluidly becomes Marie Curie’s home outside of Paris, a railway car, Hertha Ayrton’s country house, and the seashore of the English Channel not far away. Backed by Amith Chandrashaker’s imaginative lighting, the back scrim seen through a floor to ceiling grid of many panes changes color, both for mood and time of day. The single costumes for each character by Sarah Laux which are worn throughout the play immediately sum up and define the differences between the two women. The Edwardian hair styles are the work of Charles G. LaPointe.

Having won the 2014 Harold and Mimi Steinberg/American Theatre Critics Association New Play Award for I and You, this is the fourth production of a Lauren Gunderson play in New York since then including her solo play Natural Shocks on domestic abuse which was produced in 100 American theaters in 2018. A specialist in biographical plays, her The Half-Life of Marie Curie is of particular interest in that it tells a little-known story of a very famous figure. It is also notable for the vivid performances of Kate Mulgrew and Francesca Faridany. Although Gunderson is not yet a household name, she has been the most produced American playwright since 2016.

Running time: one hour and 25 minutes with no intermission