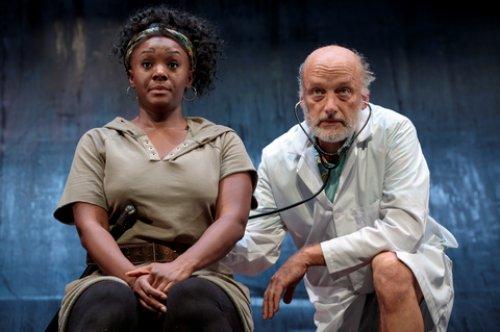 Saycon Sengbloh and Frank Wood in a scene from The Red Letter Plays: “In the Blood” (Photo credit: Joan Marcus)

Love or hate the works of Pulitzer Award-winning playwright/songwriter Suzan-Lori Parks—and theatergoers are evenly divided along those lines—The Red Letter Plays: In the Blood (1999) and F**king A (2000), certainly deserve attention.  Inspired by Nathaniel Hawthorne’s The Scarlet Letter, both plays feature a much-abused and much-abusing female character of complexity, both living in dark-hued societies: in the latter, a mythical town of indeterminate period and in the former, a present day urban nightmare of trash, hunger and need.

Having spent nearly five hours in the company of Ms. Parks’ parade of these beautifully written characters I find myself conflicted about these plays. She is brilliant at generating fire with the source of the heat difficult to pinpoint.  It’s her talent to write dramas which sizzle, constructed in her strange vernacular, yet somehow leave too many questions unanswered, the better to prove her one-sided stories.

In the Blood’s main character is Hester (aka La Negrita) (played heroically and passionately by Saycon Sengbloh) who lives under a bridge (a brilliantly evocative set by Louisa Thompson) trying to care for her five out-of-wedlock children, each fathered by a different man.

She is cursed in a chorus of repulsive epithets and spends the rest of the play both living up to and down to this invective.  Only her children—all adult actors who also play the adults in Hester’s life as well—pretty much love her without hesitation.  That her situation is “no exit,” with no hope in sight is brought home by a parade of characters who either offer no help or withdraw support, including the father of her first child, Chilli (Michael Braun who makes a fine villain and a sweet child). Just as he causes Hester to feel he might be coming back to her life, balks when he realizes there are other kids, none of them his.

And so it goes with a parade of hypocrites who brutally drain any hope from Hester:  a Welfare Lady (Jocelyn Bioh, brilliantly bureaucratic), sexual predator Reverend D (Russell G. Jones, a sublimely boo-able creature) and The Doctor (the always remarkable Frank Wood), all costumed perfectly by Montana Levi Blanco. 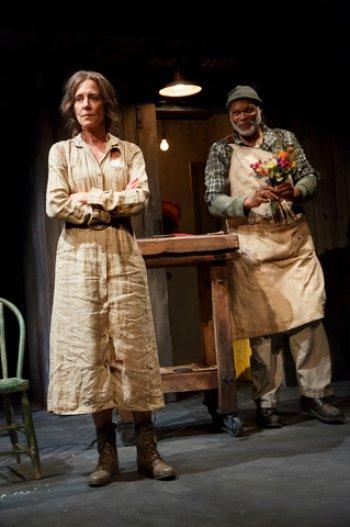 Christine Lahti and Raphael Nash Thompson in a scene from The Red Letter Plays: “Fucking A” (Photo credit: Joan Marcus)

Similarly the Hester of F**king A (a grizzled, scary Christine Lahti) is on the sidelines of society, an abortionist who is hated, feared and mocked in equal measure.  She has been branded with an ugly “A” (for abortionist) and lives in gloomy house in a gloomy, Brothers Grimm town.  (Both plays have more in common with the Grimm fairytales with their bloodlust and dark vengeful characters than modern psychological drama.)

What keeps this Hester alive is the hope that she will be permitted to see her incarcerated son, here named Monster (Brandon Victor Dixon in a scary, yet sexy, performance), who Hester Smith does not recognize after 30 years. To that end, she scrimps and saves her abortion and blackmailing fees and gets her wish.  But, as Saint Teresa of Avila famously proclaimed, “More tears are shed over answered prayers than unanswered ones.”  This is the case for poor Hester whose wished-for picnic with her son is an unmitigated disaster.

Just like In the Blood’s urban nightmare, the dreary town in F**king A—extraordinarily detailed scenery by Rachel Hauck—also offers a list of shadowy characters including Hester’s best friend, prostitute Canary Mary (a sensual, yet girlish Joaquina Kalukango), the corrupt Mayor (Marc Kudisch playing disgusting with athletic prowess), his beautiful, but evil wife (Elizabeth Stanley, brilliantly hiding complexly evil thoughts) and assorted townspeople and prisoners—all of whom break into Park’s intrusive songs.  Costume designer Emilio Sosa couldn’t quite decide what period in which to clothe these people.

Both plays avoid revealing or analyzing the two Hesters’ inner lives which is Parks’ major weakness as a playwright.  Colorful language? Yes.  Memorable characters?Check.  Motivation?  Not so much.

Nevertheless, the two directors mine the plays for everything they have.  Sarah Benson turns In the Blood into a chamber opera, its unrequited passions held in check by the claustrophobic set which echoes with Matt Tierney’s subtle city soundtrack.  Watching Saycon Sengbloh resourcefully taking every blow and not fall apart is excitingly satisfying.

Jo Bonney takes F**king A and turns it into a blood and guts oversized verismo opera in which passions and revenge drive the plot.