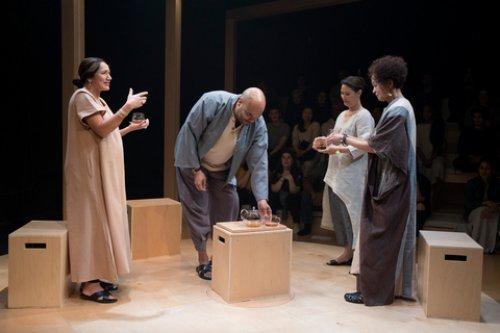 Christopher Chen’s exquisite and mystical Passage being produced by the Soho Rep is inspired by E.M. Forster’s A Passage to India, borrowing its plot and character relationships. But while Forster’s novel was simply about the British colonization of India, Chen has something bigger in mind. Chen calls the two locales Country X and Country Y so that the audience can fill in whatever two countries they wish in whatever time. Director Saheem Ali’s superb multicultural cast offers the maximum in diversity. And in this age of nations all over the world cracking down on immigrants and immigration, the play is an investigation into our complicated feelings about The Other.

When the audience enters the Soho Rep, they are asked to take off their shoes like they will be entering a temple. The actual theater space (redesigned by Arnulfo Maldonado) has been entirely redone in blonde wood with the audience sitting in bleachers on two sides at the far ends before a rectangular playing area with a raised platform in the middle, which also revolves. The only scenery is made up of blonde wooden cubes which are used for seats and a table. The play begins with actors introducing themselves and telling us where they are from. This makes the play a sort of ritual or rite of passage which includes the audience. In Ali’s production, the actors not on stage sit along the other two sides observing the play throughout. 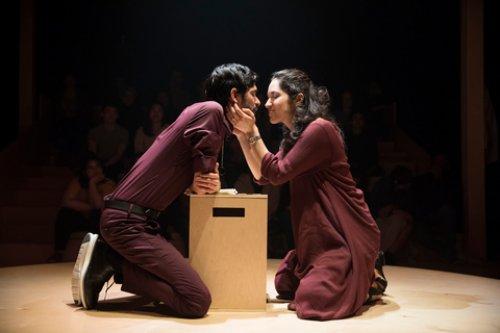 Yair Ben-Dor and Andrea Abello in a scene from Christopher Chen’s “Passage” at the Soho Rep (Photo credit: Julieta Cervantes)

Traveling to Country X which is under the protectorship of Country Y, two natives of Country Y meet and become friends on their ship: A (Andrea Abello) is going to join her fiancée R (Yair Ben-Dor) who has gone to work there for the “opportunity” though she seems to be on a personal quest, and F (Linda Powell) is an educator who is traveling to Country X to claim a teaching job she has accepted. At a tea party given by H, a wealthy Country X hostess (Purva Bedi), brings up the question: is it possible for a Country X citizen to be friends with a Country Y citizen? Her guests take different sides; however, the admired (and recently made famous in a published profile) Doctor B (K.K. Moggie) refuses to be pulled into the discussion and G, a saintly older woman who works at the temple, (Lizan Mitchell), leaves before the question is answered.

A discovers that her fiancée has changed greatly and has become disdainful of people from Country X, while Dr. B has some humiliating experience at the hands of Country Y people at the hospital at which she works. Dr. B becomes friends with F when they both take refuge in a local temple. Exchanging visits, Dr. B offers to take F to visit the famous caves nearby. Although F has had a strange, frightening experience there years before on a previous trip to Country X, she wishes to visit them again. She brings along Q who has not been taken to see the country by her fiancée. R, however, insists that Q take a gun as he hears that the countryside is not safe. F feels faint at the mouth of the caves and chooses not to go in but insists that B and Q go without her. Inside the caves, some event takes place which changes the relationships of all of the characters resulting in alienating Country X natives and Country Y visitors. Ultimately, the saintly G takes the audience back to the caves to experience their power once again. 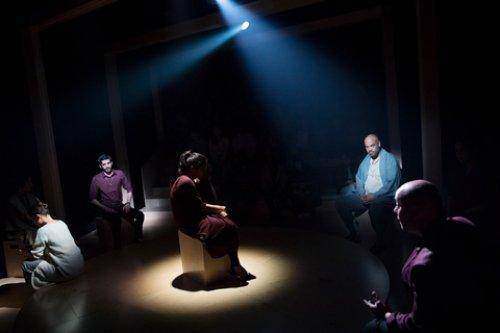 G becomes a sort of narrator speaking directly to the audience. At the beginning of the second half of the play after the events in the caves, she reminds that each one of us is seeing this story in a slightly different way, depending on personal experience. In the final scene, she asks if it is ever truly possible to understand another person’s experience. “And this failure to connect is where the seeds of anger and violence begin,” she tells us. Directed in a cool, low-key manner, the play is at all times mystical and philosophical even when the big questions are not being discussed.

G also points out that the play may remind some of Forster’s A Passage to India, but that one should put that out of one’s mind. While the alphabetical character names do match up with Forster’s cast (Miss Quested, Cyril Fielding, Ronny Heaslop, Professor Godbole, Hamidullah, etc.), there are many changes, particularly of gender. Forster’s Fielding and Doctor Aziz (here called Dr. B) are women, while Mrs. Moore, Ronnie’s mother and Miss Quested’s traveling companion, the novel’s moral center, has been eliminated and absorbed into F and G. As the scenes pretty much follow those of the book, it does not hurt to have a knowledge of Forster’s version of the story, as the alphabet soup of the character names can get a bit confusing. 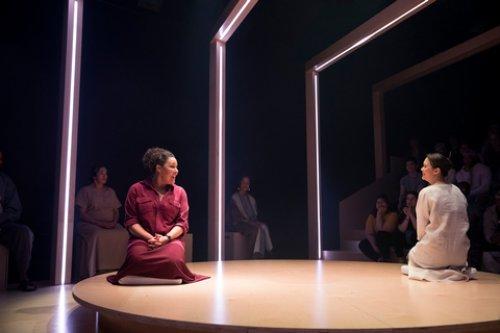 Linda Powell and K.K. Moggie in a scene from Christopher Chen’s “Passage” at the Soho Rep (Photo credit: Julieta Cervantes)

Costume designer Toni-Leslie James has put the people from Country Y in red outfits, while the people from Country X wear variations in white, blue and grey, which helps keep the two cultures separate. As the visiting Q, Andrea Abello is excellent as the naïve, loquacious young lady who precipitates a diplomatic incident. Linda Powell as her new friend and compatriot F has a diffident, unassuming and self-effacing demeanor which is exactly right. Playing Dr. B, K.K. Moggie is at first reserved and then after the incident in the caves finds her voice.

As the saintly holy woman G, Lizan Mitchell brings a quiet compassion and wisdom that seems to be innate. Purva Bedi as the wealthy H is amusingly opinionated and upright in her beliefs. Yair Ben-Dor deftly and lightly indicates the prejudices of Q’s fiancée R. As M, a Country X businessman working with corporations from Country Y, David Ryan Smith offers a different point of view to the attitude of nationalism, a more global approach. In five small but important roles from the head doctor to a gossipy servant to a mosquito, Howard W. Overshown demonstrates great versatility in making them very different from each other.

The lighting by Amith Chandrashaker is quite remarkable in making the unit set resemble many different places as well as using gradual dimness and a blackout for dramatic purpose. The sound design and original music by Mikaal Sulaiman adds greatly to the overall exotic atmosphere and cinematic quality of the production. While Christopher Chen’s Passage is quite demanding of its audience it is also a very important play with a relevant message for this time. It may not be for the casual theatergoer, but the dedicated one will not want to miss this hypnotically mystical and political production by Saheem Ali.