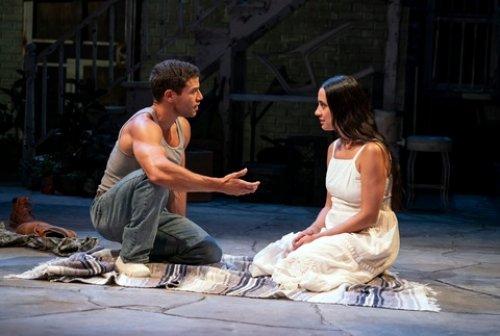 Alex Hernandez as Jason and Sabina Zúñiga Varela as Medea in a scene from Luis Alfaro’s “Mojada” at The Public Theater (Photo credit: Joan Marcus)

Following up on Luis Alfaro’s critically acclaimed Chicano retelling of Sophocles’ Oedipus Rex called Oedipus El Rey, The Public Theater now stages his equally relevant and timely Mojada which melds Euripides’ Medea with the Latinx immigrant experience in the big American cities. Those who know the Greek myth of Jason and Medea will be prepared; those who at the performance under review obviously did not know what was coming were shocked and horrified by the ending. Either way the play is spellbinding theater. Chay Yew, artistic director of Chicago’s Victory Gardens Theater who also directed the Public’ production of Oedipus El Rey, has staged the stunning and devastating play with an excellent cast of Hispanic-American actors which is as timely as tomorrow’s headlines.

The title, Mojada, which is untranslated in the play, means wetback in English, a slang term for an undocumented Mexican immigrant in the United States. Medea, a fabled seamstress from the small village of Zamora, Mexico, has illegally crossed the border with her handsome and ambitious husband Jason, her ten-year-old son Acan, and her waspish longtime family nurse Tita. With help of various church organizations, they have ended up in Corona, Queens. Although Jason has found work and a patron in Cuban-born Pilar, a rich widow with a construction company, Medea is too fearful to leave the house in this unfamiliar country. As Jason rises in Pilar’s employ, he grows increasingly distant from Medea who works longer and longer hours at her sewing machine in a home sweatshop. 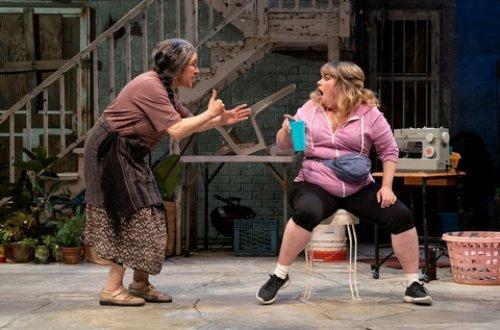 Socorro Santiago and Vanessa Aspillaga in a scene from Luis Alfaro’s “Mojada” at The Public Theater (Photo credit: Joan Marcus)

Tita brings Luisa, a Puerto Rican street seller of churros, to visit, and the voluble and gossipy woman warns Medea that Jason is getting too close to Pilar. Jason’s nights away from home Medea rationalizes as his ambition to get ahead on the job. When Jason brings Pilar to dinner, this arrogant and sophisticated woman reveals that she knows that Jason and Medea are not married, a problem in the United States. Ultimately, with Jason’s betrayal in the name of caring for his family, the original myth of Medea plays out in modern term. Even though you may know what is coming, the denouement will be terrible and appalling.

Starting about one third of the way into the play, Medea begins narrating and acting out with the others the story of the family’s flight to America across the border, rape by border guards, thirst in the desert, death of the elderly, fear of ICE officials, and the long journey to far off New York from the Arizona border. Her tale is completed in various scenes thereafter until we learn the entire shocking story of their journey. As through ripped from the headlines, the dramatization of her story is an eye-opener, making their trip extremely real and upsetting. Living in a place where there was no food and no work, they did not feel they had any choice in order to bring up their son in a better life. Now in New York Medea is to find that she has to make still greater sacrifices. 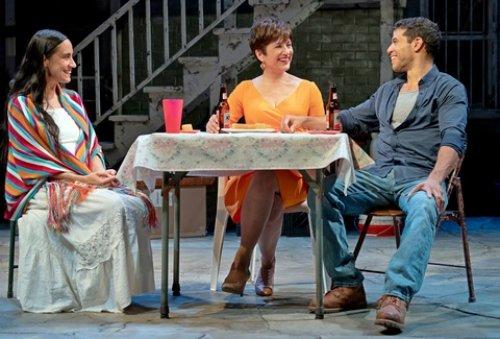 Sabina Zúñiga Varela as Medea, Ada Maris as Pilar and Alex Hernandez as Jason in a scene from Luis Alfaro’s “Mojada” at The Public Theater (Photo credit: Joan Marcus)

The play takes place on Arnulfo Maldonado’s wide open set, the backyard of a  shabby two-story brick and wood house, where the family’s real life seems to take place. Beautiful Sabina Zúñiga Varela embodies the staunch and passionate but frightened wife who has made her husband her whole world but has both agoraphobia and claustrophobia which holds her back from adapting to this new world she is unable to imagine. She is also able to call upon the spirit world from her far off upbringing in various folk rituals. Virile Alex Hernandez exudes the success and ambition of the recent immigrant who has fully adapted to his new surroundings. As the chic and cultured Pilar, Ada Maris brings a touch both the arrogant and the sinister to her real estate tycoon.

Adding comic relief is Socorro Santiago as the elderly nurse Tita, amusingly recalcitrant and gossipy, offering advice where it is not wanted though she is always proved right. Vanessa Aspillaga is equally amusing as the street seller Luisa who is fully assimilated and straight-spoken even to the point of shocking the Mexican women with her raw language. In his few short scenes, Benjamin Luis McCracken as the ten year old son Acan captures the wonder and desires of a preadolescent boy. 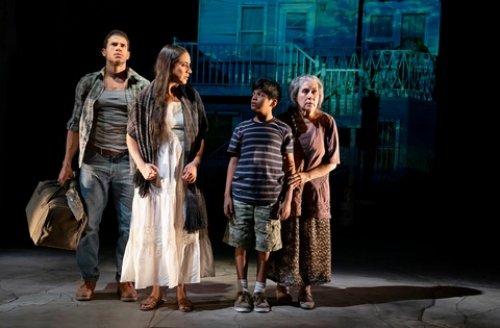 Haydee Zelideth’s costumes splendidly delineate the various levels of assimilation of the six characters. The lighting by David Weiner skillfully turns the stage of The Public’s LuEsther Hall from a sunny day in a Queens backyard to a dark night on the desert of the Southwest with the aid of Stephan Mazurek’s projection designs. Sound designer Mikhail Fiksel subtly brings in the Corona neighborhood as well as noises in the night on the trek from the Southern border. UnkleDave’s Fight-House expertly handles the fight and intimacy scenes.

Each generation reinterprets the Greek myths and plays to fulfill its own needs. Luis Alfaro’s Mojada could not be more timely or more relevant to the Latinx immigrant experience at the same time as being faithful to the original story in contemporary terms. Chay Yew’s direction adroitly increases the tempo of the many short scenes so that the outcome builds to a dramatic scream of silent pain. Mojada is not only one of the finest plays of the year, but it has also been given a nearly perfect and riveting production.