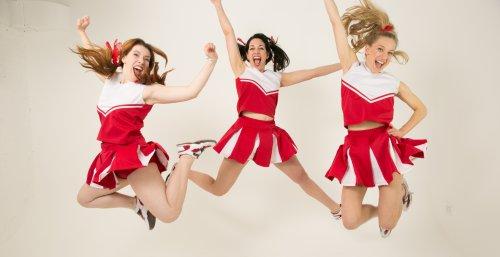 Katie Goodman’s Broad Comedy, written and directed by Goodman and Soren Kisiel, is a descendant of the old revue like New Faces of 1952 and skit comedy TV like the Carol Burnett CBS series, except that it is made up of an all-female troupe.

Songs jostle with playlets, usually with topical references.   This is a good lineage to be part of and Broad Comedy, the bumpy new show at the SoHo Playhouse, succeeds mostly due to the ebullient cast which includes Goodman, Danielle Cohn, Molly Kelleher, Tana Sirois and Carlita Victoria, all sassy and at ease with their bodies, which are sometimes covered with costumes that make them into battling genitalia.  (Watching a giant penis deflate is one of the best visual jokes of the evening.)

Clearly, there is a caveat:  Broad Comedy is for adults only with its smart-ass vulgarity, beginning with a sing-along to Goodman’s “I Didn’t Fuck It Up,” a don’t-blame-sane-liberal-me for the state of the country.  She gets her point across.

“M.I.L.F.” is a rap-style song that examines every aspect of its title aka “Mothers I Like to F**k.”  “United States Right Wing Cheerleading Squad—Neo-Nazi Edition” is probably the sharpest of the skits in a field of sharply aimed bits that include an examination of the “Empty Nest” syndrome, “Boobs Look Funny When You’re Having Sex” (with the actors dresses as huge breasts!) and “Probably Gay,” a glib, witty look at the hypocrisy of gay-bashers, sung in close harmony by Goodman, Sirois and Victoria.

“Time to Say Good-bye to Trump” is Goodman’s bitter diatribe masked in pleasant music, in which she makes it clear that the Constitution doesn’t apply to him in any way.  It ends with the sober observation that even if Trump does disappear, we would still have Pence!  Another political commentary, “I.C.E., I.C.E., Baby,” takes on the nefarious federal agency. 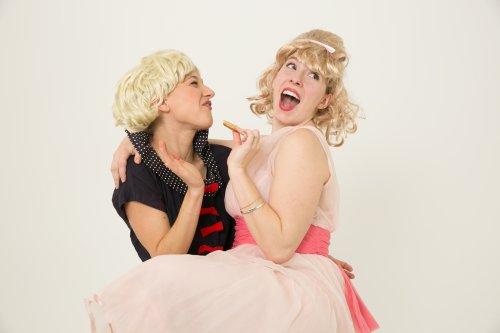 “Text Talk, performed gleefully by Cohn and Victoria depicts a culture in which conversations are conducted in emojis and texting shorthand (L.O.L., etc.), while “Them Next Door” is a too obvious twist on Lesbianism.

Female physical issues are tapped into: “Peeing a Little,” “Coffee in My Underwear” and “Vaginas like Us,” handled with varying degrees of subtlety and wisdom.

Though energetically performed, Broad Comedy is uneven and a tad ragged.  Goodman’s songs are reminiscent of sixties’ folk rock with some lyrics jammed uncomfortably into simple melodies—smart, but obvious.

There is a lot here to savor, but the pacing is askew and the show needs someone with a distance from the material who can do some nips and tucks and find the right timing for each section of the show so that the performance would appear less frantic.