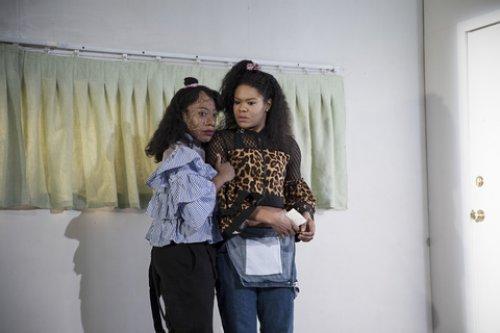 Alfie Fuller and Dame-Jasmine Hughes in a scene from the Soho Rep production of “Is God Is” (Photo credit: Julieta Cervantes)

Aleshea Harris’ Is God Is, the second winner of The Relentless Award, the largest cash prize to an American playwright, now having its world premiere at the newly renovated Soho Rep is an absolutely ferocious play. Channeling the Greek plays, Electra and Medea, the Jacobeans, the early plays of Sam Shepard and the Spaghetti westerns, this is the revenge play to top them all. Directed by Taibi Magar who also staged the equally relentless Underground Railroad Game at Ars Nova, Is God Is makes for riveting theater and the body count is very high by the end. Those with a weak stomach for blood and violence had better stay away.

Racine (Dame-Jasmine Hughes) and Anaia (Alfie Fuller) are 21-year-old twins whose mother they believe died in a fire when they were three. The episode left both of them scarred: the fierce and merciless Racine on her back and arms which can be covered, while Anaia has scars on her face which make her shy and retiring. Having been brought up in a series of brutal foster homes, they are no strangers to both violence and misery. After no word for 18 years, they receive a letter from their mother who is in the ironically named Folsom Rest Home for the Weary asking them to visit as she is dying. Locating her in the “Dirty South,” they find that she has burns all over her body so much so that she describes herself as an alligator. She has a mission for them: it was their father who set the fire and before she dies she wants them to get her revenge on him and all those around him, which turns out to include the lawyer who got him off in his trial, his materialistic second wife, and her two twin sons, aged 16 years old.

Accepting the mission, Racine tells her sister that their mother is God as she gave them life, so that their mission is almost Biblical in its obligation. Using an old television set above the stage which announces chapter heading (over video loops) in the manner of a western serial or Brechtian tragicomedy, the play follows the sisters’ journey to find their father who turns out to be hiding in plain sight in the Los Angeles area. Each of their encounters is ironic (the lawyer is attempting suicide, the wife is fleeing from a bad marriage, and the sons think they are strippers sent by their father for their birthday.) With both sisters narrating their story, the outgoing Racine is the more violent one and thirsty for revenge. Using a rock in a sock she fulfills her mother’s orders while ultimately Anaia finds her inner nemesis to save her sister in the final stage of their mission. 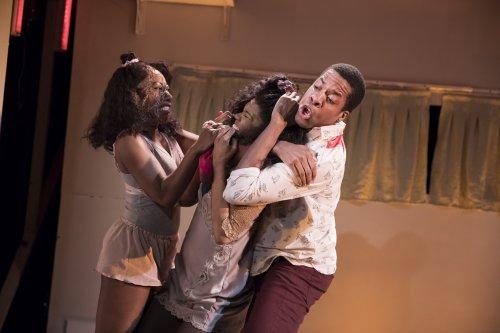 Alfie Fuller, Dame-Jasmine Hughes and Anthony Cason in a scene from the Soho Rep production of “I God Is” (Photo credit: Julieta Cervantes)

When they finally encounter their father (called simply “The Man,”) he is dressed in black with his face covered by a huge cowboy hat, shades of Sergio Leone’s “The Man with No Name” from the Dollar Trilogy. Like the play and Adam Rigg’s minimalistic sets, he speaks sparingly and appears to be awaiting them all these years. The final confrontation which takes place in the desert is something Sam Shepard could have written for a western film epic.

As directed by Magar with an all–Black cast in a fast-paced, staccato style, Harris’ free verse dialogue seems to imply more than it says. Hughes and Fuller make a convincing team as sisters who have had to be everything to each other, with Hughes’ Racine the more dominant one, and Fuller the quiet more introspective sibling.  As their mother, only known as “She” (though the father tells us her name), Jessica Frances Dukes is a revengeful spirit out of Greek tragedy (think Clytemnestra) living with only one purpose in mind. Michael Genet’s lawyer Chuck Hall is an amusing study of a man at the end of his rope who has nothing left to lose.

As their father’s second wife Angie, Nehassaiu deGannes is saddled with a satirical middle-class woman who believes that money and objects can make up for actions. She makes a strong character out of someone who is mainly a parody and a symbol of bourgeois decadence. As the second set of twins, Caleb Eberhardt and Anthony Cason are opposites just like their half-sisters. Eberhardt’s Scotch is a self-involved machoman and would-be rapper while Cason’s Riley (who wears glasses) is a sensitive vegetarian with an uncomfortable secret of his own. When we first meet Teagle F. Bougere as The Man, he is a silent archetype of the Old West, a man of few words who is as sinister as he appears to be up front about his actions. Though he is only in the play for a short time in the climactic scenes, he leaves an indelible impression. 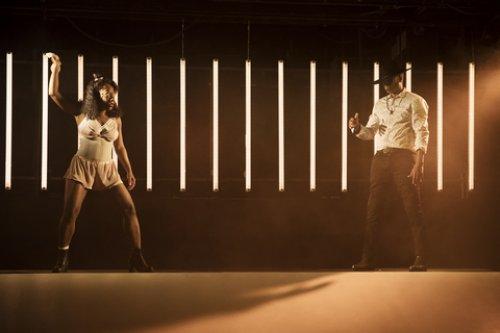 Alfie Fuller and Teagle F. Bougere in a scene from the Soho Rep production of “Is God Is” (Photo credit: Julieta Cervantes)

Costume designer Montana Levi Blanco has designed netting for the sisters and the mother that eerily stands in for their terrible burns. Her costumes make clever statements with their use of iconic contemporary items like a leopard skin jacket, an off-the-shoulder jumper, and picture t-shirts. Rigg’s spare setting works fine for two-thirds of the 13 shorts scenes, but has a coup de theatre in store for the final confrontation. Matthew Richards’ lighting makes subtle use of color to heighten various moments of dark intensity. The final confrontation between the father and his daughters is entirely a dramatic lighting effect. The fight direction by J. David Brimmer has just right amount of violence for a play with such a high body count.

On the basis of Is God Is, Aleshea Harris is a new voice in the American theater whose work bears watching in the future. The play is the latest in a long line of revenge stories from the Bible to Quentin Tarantino. The nagging question becomes does Harris have an underlying theme other than the righting of past wrongs by violence. However, Magar’s riveting production never gives the viewer a chance to ponder on this dilemma while the tightly written drama is unfolding before you. While the play has a dark humor throughout, in a parody of the famous Louis Jordan song, it seems to ask the question, “Is God is or is God ain’t?” After witnessing the retribution of the sisters, only the viewer can decide for him or herself.