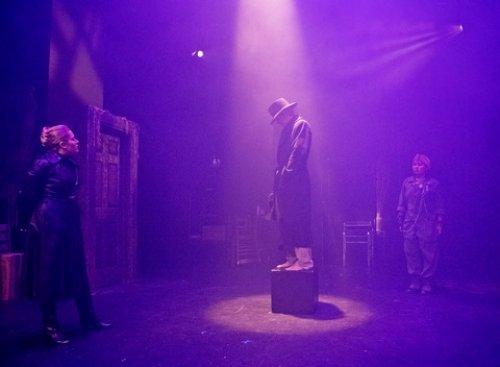 PTP/NYC (Potomac Theatre Project) began its 33rd season with a timely and provocative revival of its 1991 program, Havel: the Passion of Thought, subtitled “Czechoslovakia in the 1970s and 1980s,” combining one acts by Vaclav Havel, Harold Pinter and Samuel Beckett. The theme of all five plays is the effects of totalitarian and repressive regimes on the behavior of its victims. The title is actually a misnomer as the plays are about protagonist Ferdinand Vanek’s passion for honesty and morality in a world willing to compromise, and accommodate dictators and ideologues. Thought has very little to do with the characters’ behavior.

The three Havel one acts, known as The Vanek Plays, though written separately, were originally banned in Czechoslovakia and performed secretly in people’s living rooms as well as being passed around in hand-written copies. They all deal with Vanek, a dissident playwright unable to have his plays produced, who is now working in a menial job, an alter ego for its author and his experiences under Communism. The problem with filling out the program to include both Pinter’s The New World Order and Beckett’s Catastrophe (dedicated to Havel) is that since the plays all have the same theme and development, it feels like overkill.

Richard Romagnoli’s production includes Vanek (played quite passively by David Barlow) in all five plays, but not only is The New World Order extremely British (the statement about “making the world clean for democracy” has led some critics to believe that this play is set in the United States), but Catastrophe is in a totally different style from the Vanek plays. Romagnoli’s staging is very flat and makes all of the plays seem to be in the same style, although they are quite different. 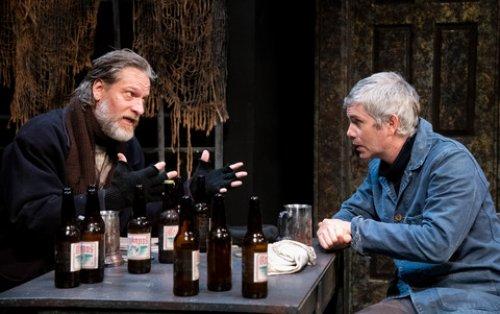 In all three of the Vanek plays, he is summoned by a colleague or friend who wants something from him due to his integrity and inflexible moral code or fame. Ironically – or unfortunately for them – in each case it is something he can’t give. In “Interview,” also translated as “Audience,” Vanek forced to work in a brewery in a physical job is called to the Brewmaster’s office. The Brewmaster has his file but does not appear to be firing him but buttering him up instead.

As he drinks many beers which he forces on Vanek as well, it becomes obvious that he wants a big favor, which no one should have to do for him or herself. However, Vanek refuses politely to help him out. Comic in tone, but serious in import, the play pokes fun at the totalitarian regime under which they live. Unfortunately, Michael Laurence as the Brewmaster is the same throughout, bringing no rising tension to the encounter.

The expression “private view” in Czechoslovakia used to refer to performances of forbidden works enacted in people’s living rooms by actors who could no longer get jobs in the Communist regime. In “Private View,” (also translated as “Unveiling”), Michael and Vera claiming to be Vanek’s best friends have invited him to view their redecorated apartment done up in the most expensive style, mixing modern with antiques. While Vanek refrains from complimenting their taste and new possessions, they become increasingly frustrated and critical of his wife Eva and their relationship. Ultimately, they claim to have made the changes just to get Vanek’s approval. 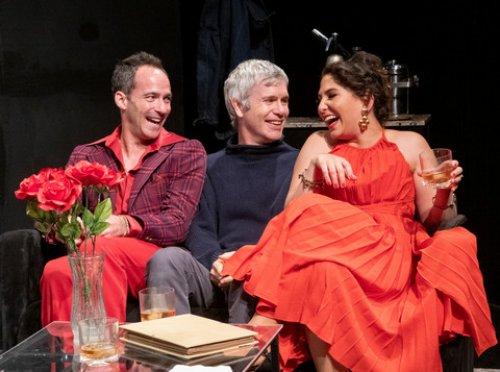 In any event, they have played the system and done very well for themselves, unlike Vanek whose dissident activities have hampered his success. Although Christopher Marshall and Emily Kron have a great deal of energy and joie de vivre as the couple, they remain exactly the same until the moment when they realize Vanek is not going to give them his approval and then they become abusive. We suspect all along that the over-the-top décor will not impress the quiet, reserved Vanek.

In “Protest,” Vanek visits another writer, the state approved Stanekova, previously a long-time friend of his to ask her to sign a petition concerning the arrest of a young rock star. Ironically, she was just going to call Vanek to ask him to begin a protest as she has a personal reason for wanting the young man released. However, when confronted with the list of signatures already gathered, she hesitates as to the personal sacrifice that it may cause her in her career.

Although she claims that in the years in which she and Vanek have been estranged she has lost respect for herself and her integrity, she has a crisis when confronted with whether to add her name to the list. Unfortunately, we guess from the beginning what Stanekova’s choice will most likely be so that the production does not leave much to wait for. In a role originally written for a man, Danielle Skraastad has the glibness of the successful in delineating her discontent with her current repressive work situation as well as the material gains she has made. However, she makes her choice seem a financial decision rather than a moral one and her very glibness vitiates her good intentions. 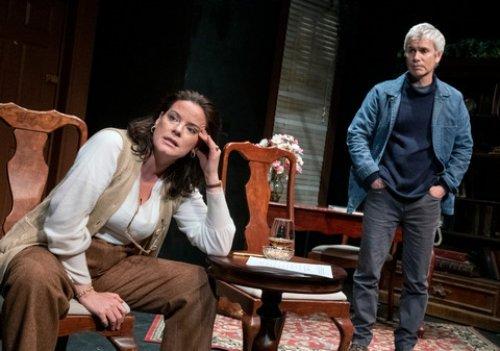 The curtain raiser, The New World Order by Harold Pinter, known as a human rights activist, is probably rarely performed as it is under eight minutes long and needs to be attached to longer plays. Set in an interview room, a silent man also played by Barlow who has his head covered by a black hood faces away from us and at two men, Lionel and Desmond (played by Lawrence and Marshall) dressed formally in white shirts and ties, two state interrogators. They discuss the fact that the man before them has no idea what they will do to him or his wife.

They also describe him as a dissident who wouldn’t keep quiet until now when faced with the consequences of his actions. While some of the dialogue between the two interrogators (and possibly his future torturers) is comic, the production produced no laughter at the performance under review. More damaging is that although there should be rising tension at the thought that they may begin torturing the incarcerated man while we watch, there is no change in mood.

The final play is Beckett’s “Catastrophe,” the sparest of the five plays. A theater director (Madeline Cicocci) gives instruction to an assistant (Emily Ballou) about the positioning of a silent man (Barlow) on a pedestal center stage being used as a prop. The director’s barked instructions are more and more careless of the man’s dignity and physical wellbeing. It appears that they are staging the final moments of a play to open that very night. Although the man has no volition in the situation, ultimately he telegraphs to us that he does. Sound designer Allison Rimmer fails to establish the ending so that we realize what exactly happens. Ciocci’s one dimensional performance gives no idea who she is other than a self-involved martinet. Likewise, Ballou as the assistant slavishly follows the instructions without letting us know much about her. 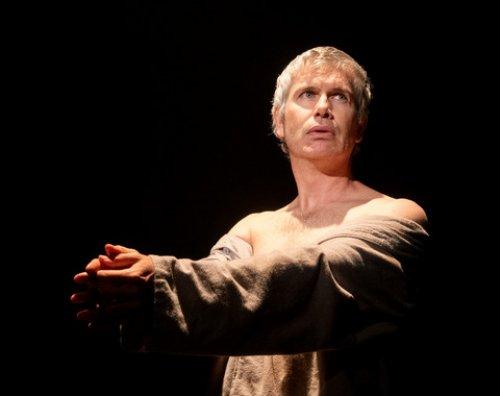 Mark Evancho’s scenic design cleverly incorporates the elements from the first three plays into his set design so that there is the minimum of time lost between the plays. The expensive art work in the renovated apartment in glass and chrome in “Private View” is accomplished by using a remote to trigger light cues by designer Hallie Zieselman which establish that the more outrageous design elements are offstage. Zieselman’s most effective lighting is for “Catastrophe” which bathes the stage in soft purple lights giving the play an eerie look.

While all five plays have been suitably costumed by Glenna Ryer, she is most successful with the bourgeois materialistic couple in “Private View” whose red outfits say as much about them as their new surroundings. That Havel: the Passion of Thought still has much to say to us after 45 years says a great deal about the state of the world and human rights today. However, Richard Romagnoli fails to do justice to the plays by using the same flat style with all five.

Havel: The Passion of Thought (through August 4, 2019, in repertory with “Dogg’s Hamlet, Cahoot’s Macbeth”)