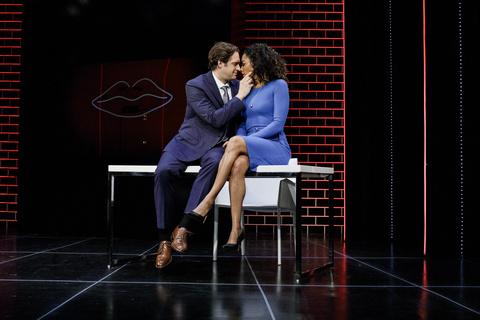 Colin Hanlon and Rachel Nicks in a scene from A.R. Gurney’s “Final Follies,” the first play in an evening of the same name at Primary Stages (Photo credit: James Leynse)

It would be a pleasure to report that A.R. Gurney’s last play entitled “Final Follies” performed with two early works, is one of his best, but that is not the case. As directed by David Saint on a triple bill celebrating the work of this major satirist who died in 2017, this comedy is minor Gurney. In fact, part of the problem with this evening produced by Primary Stages is that Saint has used three separate acting styles, one for each of the plays, all of which are wrong for the material. Surprising considering that Saint’s 2002 direction of Gurney’s full length, The Fourth Wall, was quite delicious. However, his touch seems to have deserted him here.

The three plays have been chosen with an eye towards Gurney’s main preoccupations: the waning of WASP culture, stultifying suburban life, and the darkest groves of academia. “Final Follies,” the first play of the evening, introduces us to Nelson (Colin Hanlon), the scion of a well-heeled New York family. Having failed at teaching and banking, jobs set up by his wealthy grandfather, he has answered an ad to be an actor for the money. However, the production company turns out to make “discreet adult videos which have therapeutic value” for couples having marital problems, though he does not seem to have a problem with that as he likes women. Nelson is not the last surviving member of his clan but has a brother Walter who decides to inform their grandfather of Nelson’s new job, but things do not go exactly as Walter has planned.

While Hanlon is personable, suave and nonchalant and Rachel Nicks as the casting director is beautiful, elegant and wry, Saint has directed them to handle their conversations as light banter which undercuts the material as it is not pointed or sharp enough to be handled this way. Mark Junek as Nelson’s older brother is rather frazzled while veteran actor Greg Mullavey as the 80-year-old grandfather is rather inconsequential in an underwritten role. Although Nelson’s clothing is supposed to suggest a throwback to an earlier time, designer David Murin has put him in the sort of contemporary business casual which is right at home today and Nicks in chic outfits that belie the shabby environment she is working in. James Youmans’ ultra-modern setting (which is used for all three plays) also fails to suggest the shady, grubby worn reception room of the production company. 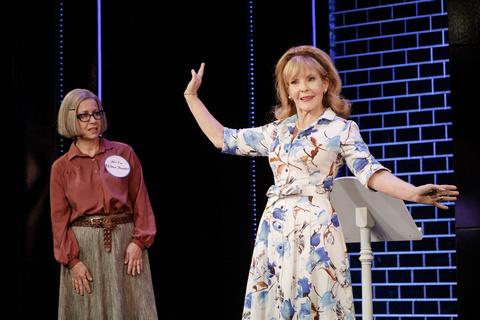 “The Rape of Bunny Stuntz” which dates from 1964 is set at a suburban committee is set at a suburban committee meeting being run by Bunny (Deborah Rush) for the first time as the new chairwoman. Although we are never told the name of the committee, what its members share is that they are all “in some ways unhappy people. … discontented, concerned and so: involved. Oh, we have rich full lives at home. I don’t mean that, I mean that – I just mean that what goes on these is not enough. Husband, children, home – they just don’t fill – the gap, do they?” Bunny is unable to open the box she has brought which contains the minutes, the agenda, the mailing list, etc., because she had forgotten the key. And then she is informed that a man in a leather jacket in a red Impala in the parking lot who claims to know her insists he has the missing key.

Not only is the title symbolic of the change in her life Bunny is searching for, the play is squarely in the Absurdist camp of the sixties with such plays as Edward Albee’s The American Dream and The Sandbox as more famous models. Although Rush is  convincing as Bunny, Saint has directed her to deliver all of the monologues in this very talky play the same way rather than show any change or growth on her part. Betsy Aidem as her assistant Wilma Trumbo and Piter Marek as Howie Hale working as handyman and general factotum have been allowed to behave in a rather exaggerated manner so that they do not seem to be in the same world as Bunny. And although Wilma is supposed to be younger than Bunny, her costume by Murin and her wig and hair design by J. Jared Janas make her look older and dowdier. 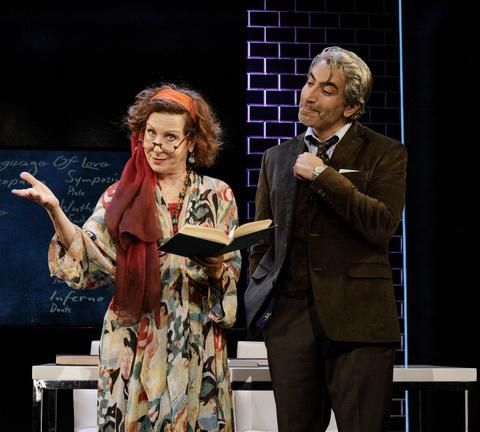 The best is saved for last. Gurney’s 1969 “The Love Course” is set in the world of academia which he knew so well as he taught at the Massachusetts Institute of Technology from 1960 – 1996 in both the Humanities and Literature Departments. While the play is hilarious, Saint has directed Aidem as Professor Carroway of the Romantic Literature Department and Marek as Professor Burgess of the Renaissance Department (who have been accused of being too flamboyant and theatrical) to be so over the top from the outset that they have nowhere to go. However, the play is a subtle parody of both the pomposity and hypocrisy to be found in college English Departments.

The two professors have been co-teaching a course in the great themes of love in literature from Plato up to the present, but today is their last class since Professor Carroway is leaving as she has not been granted tenure and Professor Burgess has accepted a position in the administration. As they begin their lesson on Shakespeare’s Antony and Cleopatra, it becomes obvious that the course for them was a flirtation that has become a deep, but platonic relationship. We discover that Professor Burgess is married and has children he has no intention of leaving.

Professor Burgess has to leave for a vote on the Curriculum Committee which allows Professor Carroway to tell us the true situation between them. Engineer Mike, sitting in on class as the boyfriend of student Sally with whom he is having his own domestic problems, is continually sent to the committee meeting with messages for Burgess. When Burgess finally returns with his unseen wife, he and Carroway dramatize a scene from Wuthering Heights which allows them to explore their personal relationship and their true feelings come out. This finally brings us back to Plato who is responsible for it all. 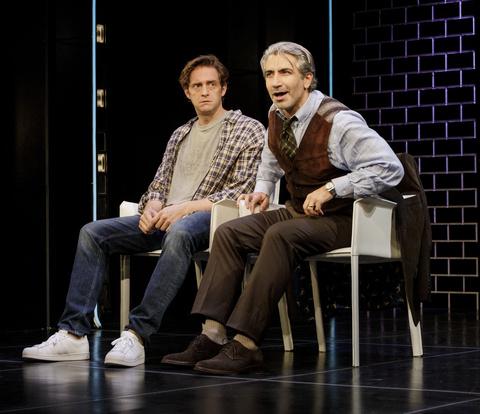 Although Aidem and Marek are exaggerated and dramatic, they mine the material for a multiplicity of laughs at the expense of romantic literature, professors and academia. Nicks returning as Sally isn’t given much to do as the devoted literature student, but Hanlon as her boyfriend Mike gets a workout running out of the theater to deliver messages and rolling his eyes expressively at the excesses of these overly dramatic types. One does not have to be in academia or in literature to enjoy this clever parody.

For this play, Murin’s costumes are pitch-perfect. He has given Aidem a wonderfully flamboyant look which sums up her character: long flowing robe in white, green, blue and red which resembles a Gauguin print over a flaming red dress, and with her hair tied up in a flowing red kerchief. As the more conservative of the two professors, Marek wears a brown three piece suit and a matching brown tie with a gold pattern. As the twentysomethings, Nicks and Hanlon are dressed casually as you would expect of contemporary college students. While Youmans’ unit setting adds little atmosphere to the first two plays, with the addition of a blackboard, the ultra-modern furniture is exactly right for a top of the line college classroom.

Although the themes of Final Follies are pure Gurney, the clashing acting styles permitted by the director diminish these slight but amusing one acts. Though the actors work hard to put over the plays, another production may show that the new play as well as the old ones have much more mileage in them. The Primary Stages production of Final Follies is not exactly a fitting tribute to the late A.R. Gurney. That is still to come.

Running time: two hours and five minutes with one intermission