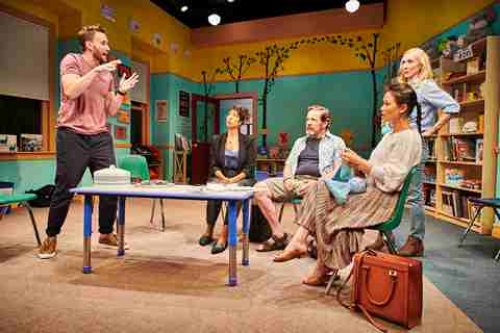 Jonathan Spector’s Eureka Day now having its East Coast premiere at Walkerspace is a blisteringly satiric and provocative play torn right out of the headlines. Ostensibly about how one progressive elementary school handles a case of mumps due to many anti-vaxxers, the play also tackles many other hot button topics. Ultimately, the play’s message is that with too much sensitivity and too much political correctness nothing can be accomplished. It is a wake-up call for all of us.

The title of the play refers to the Eureka Day Elementary School in Berkeley, California, in the fall of 2017. However, the title also suggests the crisis that besets the school and may bring its financial downfall. Mainly set in the school library, the play covers a series of executive board meetings which are made up of Don (Thomas Jay Ryan), the head of the school and four parents, representing the diversity of the student population: board president Suzanne (Tina Benko), the Caucasian mother of three, who is also a life coach; Meiko (K.K. Moggie), a biracial Japanese/Caucasian, the single mother of Olivia; Eli (Brian Wiles), Caucasian, a stay at home dad of Tobias, who worked at Facebook and became very rich when he cashed out; and Carina (Elizabeth Carter), African American co-parent with her wife of a special needs child Victor, new to the board as her son has just transferred from another private school which was not a good fit for him.

The tone is set at the first meeting of the school year in which the members debate the dropdown menu on race as whether they should include “Transracial Adoptee” as an 11th choice before Other. (“There’s no benefit in Feeling Seen if you’re simultaneously being Othered” gets a big laugh.) Carina is informed that all decisions are made by consensus and that they only use Gender Neutral Pronouns when referring to a student. The current budget is being sapped by the renovations to the bathrooms to make them All Gender. She also is told to our mirth of the 8th grade production the previous year of Peter Pan that raised issues of colonialism and its problematic portrayal of Native Peoples which was solved by setting the production in Outer Space. The session ends with a reading from Rumi which Don always likes to close out the first meeting of the year. 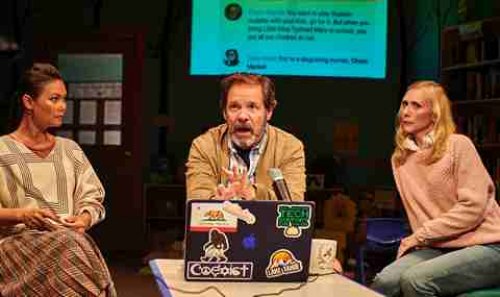 Then in the emergency second meeting they are confronted with the fact that a student has come down with the mumps and that the County Health Commissioner is sending out a letter quarantining all students who have not had their MMR vaccinations. The board is divided between those who believe in parental choice and those who put the community first. When the number of ill children rises to 15 and it is discovered that half of the students are unvaccinated, instead of making a decision about closing down the school the board decides to have a Community Activated Conversation (CAC), a sort of online town meeting of the board and at home parents. This spirals out of control due to the number of points of view expressed.

The first act is satiric and very funny while the second act turns deadly serious when one of the students goes to the hospital and needs to be put in a medically induced coma after playing with an unvaccinated student at the school. While mainly about the anti-vaccination movement, the play also takes on the teaching of evolution, climate change, antibiotics in animals, the drawbacks of plastics, and big pharma. While showing us the dynamics of a committee of strong personalities at work, ultimately the play suggests that giving credence to every point of view is dangerous for the public good. Following in the new genre of committee meeting plays represented by Miles for Mary, Eureka Day goes further in bringing up new situations in each scene while developing the original premise of how do we contain the outbreak of an epidemic.

Adrienne Campbell-Holt directs the superb five member cast who give indelible performances. You won’t be able to imagine anyone else in these roles after you have seen this important play. The characters hilariously bend over backwards not to offend anyone’s sensibilities but their biases and beliefs are revealed in everything they say. Lux Haac’s costume designs define each character from the moment we see them as they try to look casually chic, but at the same time demonstrate their social status.

Benko’s Suzanne is the sort of person who needs to define everything and remind everyone to be careful of lacking in sensitivity but her assuming that Carina, the only African American on the board is on significant financial support and not paying her full way reveals her streaks of prejudice. Watch Benko’s body language as demonstrative of what she is actually feeling but doesn’t express. As the head of the school, Don played by the ultra-calm Ryan is the peacemaker who knows how to change the subject and get the committee back on track, but himself never expresses a direct opinion. 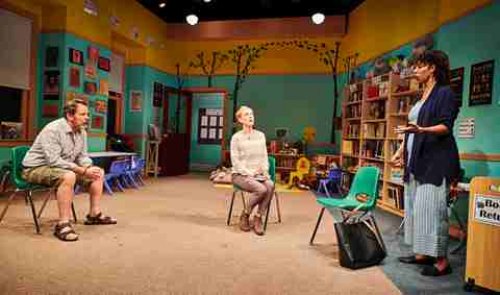 Carter’s Carina is initially shy and retiring but not only finds her voice in the course of the play but becomes Suzanne’s adversary in calling for science and rationality. Her face betrays her feelings with its very deadpan expressions. With her no-nonsense, matter-of-fact approach to each of the issues, she is ultimately the play’s heroine. As the single parent, K.K. Moggie’s Meiko seems distracted until she has to deal with the issue of not vaccinating her daughter and then her emotions come finally into play. Eli (amusingly played by Wiles) in an open relationship that his wife has come to resent is the sort of know-it-all who interrupts everyone with ideas that are not fully thought-out.

John McDermott’s set for the progressive elementary school library (a section for social justice books for the lower grades) with its story corner and children’s chairs is so realistic that one suspects that he copied such actual places. The lighting by Grant Yeager not only defines the time of day, but also subtly creates various moods. Kate Ducey’s hilarious and satiric projection design for the Facebook conversation for the virtual CAC is one of the highpoints of the evening as the reactions become faster and faster as well as nastier and nastier. Both Amy Altadonna’s sound design with its appropriate music and songs between the scenes and Brian Bernhard’s meticulous prop design are also worthy of note.

Not only is Jonathan Spector’s Eureka Day an entertaining evening in the theater, it is also stimulating and provocative as the issue-based discussions heat up and the stakes are raised higher and higher. From Adrienne Campbell-Holt’s elegant direction, to the impeccable acting of its cast of five and its spot-on production design, Eureka Day is superlative theater. This may just prove to be the best play of the year, certainly one of the most challenging and engrossing.

Walkerspace, 46 Walker Street, between Broadway and Church Street, in Manhattan