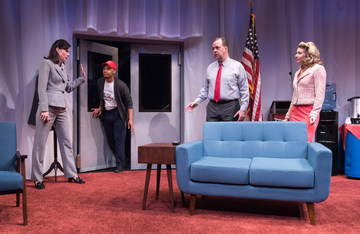 Initially a very light comedy, Jason Odell Williams’ engrossing and entertaining Church & State becomes deadly serious on the topic of gun control and religious beliefs in politics. While some of the characters are stereotypes, they change enough that this is more than a sit-com. As directed by Markus Potter, this is a fast-paced, clever and funny comedy with an important message. It is not afraid to take on big issues in a sit-com manner.

Rob Nagle (who created the role in the Los Angeles production) plays “compassionate conservative” North Carolina Senator Charles Whitmore who is up for reelection in a statistical dead heat in just three days’ time, running on a campaign slogan of “Jesus is my Running Mate” (chosen by his wife Sara). However, earlier that day he has been shaken by attending the funeral of 29 students shot by a lone gunman at the local elementary school which his sons attend. It could have been his sons who had been killed. 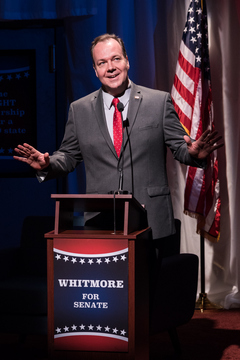 Immediately after the funeral he was stopped by a blogger who asked if he had turned to prayer in his time of need. Whitmore replied without censoring himself that he could not understand a God who would allow something like that to happen. Now it is afternoon, the story has gone viral, and Whitmore has a major campaign speech to deliver at North Carolina State University. He now wants to go “off speech” and “speak from the heart” about the need for some kind of protection to keep this from happening again, this from a politician who has always campaigned on upholding the Second Amendment in the past.

The two women in his life, his wife Sara, a Bourbon-swilling, devout Southern Christian, and Alex Klein, his New York liberal Jewish campaign manager, don’t usually agree, but on this issue they see eye-to-eye. It is too close to the election to start changing his message, while instead he has to do damage control to counteract the effect of the tweet that has gone viral, as he is about to lose the religious right. But can he stand by and do nothing but keep the status quo when the rules of the game have changed? Church & State asks some serious questions about the real meaning of the second amendment and how politicians hide behind accepted religious teachings. 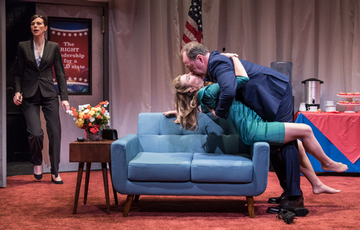 As the conflicted senator who has suddenly had a change of heart after years of espousing long-held beliefs, Nagle has the suavity of the long term politician and the naiveté of the downhome local boy who has made good. His interaction with his women as he reveals small pieces of the situation he has gotten himself into is very amusing. Much of the humor is at the expense of his wife Sara who though a college graduate is still a small town girl in the big world who makes a great many correctable mistakes. However, Nadia Bowers eventually reveals Sara’s motivation and disappointments which redeem the character from being a Southern cliché. On the other hand, Christa Scott-Reed’s Alex is the efficient professional who never allows herself to get down to their level. Jonathan Louis Dent demonstrates versatility in four roles which include campaign assistant, blogger, and security officer.

David Goldstein’s unit set in red, white and blue is a perfect depiction of a college green room behind the auditorium and works well for two separate locations. Sticking to the same color scheme, Dianne K Graebner’s costumes are suitably appropriate. Erik T. Lawson’s sound design is a marvel of clarity. Church & State at only 75 minutes seems to say a great deal in a short period of time.