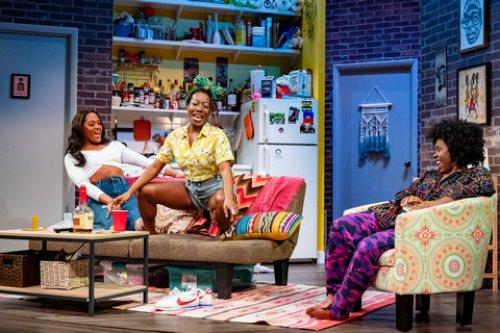 Poet Aziza Barnes’ first play, BLKS, now at MCC Theater Space is raucous, vulgar, outrageous and contemporary in Robert O’Hara’s hilarious, over-the-top production. Following the adventures of three black women roommates from Brooklyn over a day and a half, it shows us how the Girls are living today – Lena Dunham would approve. However, the loud and busy production in the Newman Mills Theater stage will thrill twenty and thirty somethings, while older people may not be in tune with it. It is an insightful view of modern life today from the black female perspective and as liberated as a play can get at this moment in time. There is likely to be a generational divide to this comedy which pushes the envelope.

The play begins on Friday, June 1, 2015 in an apartment in Brooklyn “where BedStuy meets Bushwick.” It is early morning and from off stage we hear Octavia and Ry, her girlfriend of three months, having noisy sex. Octavia then discovers that she has a mole on her clitoris but Ry doesn’t think she knows her well enough to take a look. As a result, Octavia throws Ry out. It is not a good day for Octavia as she has been fired from her job at The Bean – which will give her more time to work on the screenplay she is supposed to be writing for a film Ry is preparing.

When she is told by her cousin, a doctor, by email that the mole is cancerous she decides she and her roommates Imani, a wanna-be stand-up comic, and June, an account consultant who has just gotten a job at Deloitte and who has found her longtime boyfriend Jamal cheating on her for the 11th time this year, should go out and celebrate what might be her last chance to have sex if the procedure goes badly. 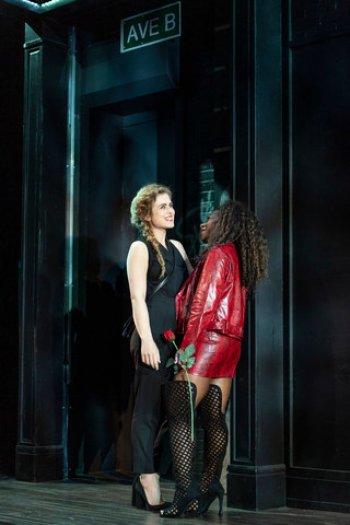 Things only get worse when the women get off at Prince Street in Soho to go to club. June is assaulted by a man on the street, and Imani finds Ry talking to a white woman that she names “That Bitch on the Couch.” Ry leaves as she has work in the morning and the white woman starts romancing Imani, particularly when she discovers that she has a gig at the Nuyorican Café later that night. June breaks her heel and meets Justin, a young man who carries Crazy Glue for just such contingencies. After he fixes it, they get tight while Octavia has an unpleasant experience in the restroom.

Once home, June puts on her cotillion gown which always makes her forget Jamal’s betrayals when Justin appears at her window. Offered a bed for the night rather than go home to The Bronx, Justin ends up interacting with all three women. In the morning Ry shows up having forgiven Octavia only to find her with Justin. Imani returns and is in a panic because she cannot find her Eddie Murphy’s Raw DVD from which her act is based. Octavia return from the doctor and the three women assess their situation.

Paige Gilbert, Alfie Fuller and Antoinette Crowe-Legacy make the three roommates as different as possible. As Octavia, Gilbert is over-the-top from the moment we meet her. Fuller’s Imani has a wry, low-key sense of humor. Though she is codependent on Jamal, Crowe-Legacy’s June is much more professional that the other two women. Coral Peña makes Ry seem to be the most sensible of the four. Chris Meyers is charming as the young man who picks up June, while Marié Botha as That Bitch on the Couch who is obviously from money appears to be slumming at the club and having a great time meeting new people. Both Myers and Botha also appear as street people that the women encounter in Soho. 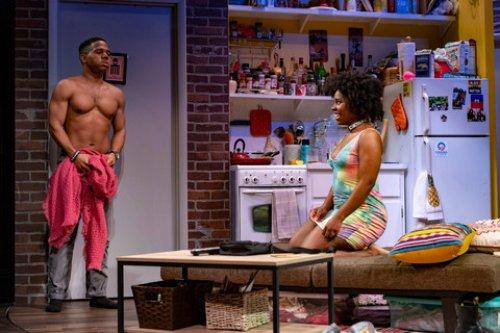 While Clint Ramos’ realistic settings (some of which appear and disappear on a revolving stage) are quite eye-filling, O’Hara uses the revolve too often, making the play seem quite busy. Some scenes of just a few lines have unwarranted set changes. Dede Ayite’s many costumes are a colorful collection and define the characters as soon as we see them. The lighting by Alex Jainchill appropriately shifts for the daytime, nighttime and dawn scenes. Palmer Hefferan’s sound design is filled with trap music, Bachata music, and Ratchet songs which are appropriate to the milieu.

While Aziza Barnes’ BLKS has much in common with sit-com, it is played out in farce tempo and is very funny. The play might be more appealing if the characters did a little less screaming although they are seriously provoked. Robert O’Hara’s production which is not as controlled as his direction of his own plays gets a good deal of mileage out of the characters and the situations. With this top-notch cast, you will not be able to get Barnes’ characters out of your head. However, you do have to be prepared for raw, coarse talk with many four letter words which become a kind of private lingo among the women. Nevertheless, this first-time playwright demonstrates a firm grasp of characterization, dramatic structure and humor and we look forward to her next play.