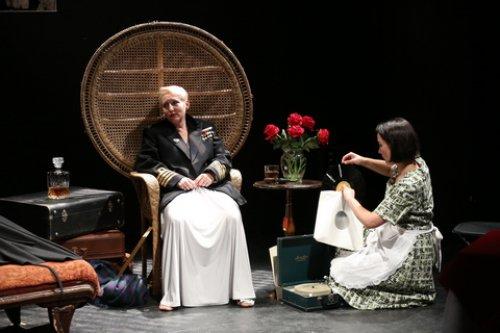 Jessica Walker and Rachel Austin in a scene from “All I Want Is One Night” (Photo credit: Carol Rosegg)

Part of 59E59’s Brits Off-Broadway 2018 festival, Jessica Walker’s All I Want is One Night takes place in an odd combination of cabaret and antique shop.  Theater B in the 59E59 Theaters complex has been done over as an intimate café with moody lighting by Kate Ashton and extraordinary period perfect costumes (uncredited).  It is 1980 in Haut de Cagnes and Suzy Solidor (Walker) in her dotage is about to be painted by Lindstrom (Alexandra Mathie who plays multiple characters in Solidor’s life quite convincingly) and is being cared for by a much younger lady, Giselle (Rachel Austin who also plays Daisy, later in the play).

Giselle finds a portrait of Solidor taken by the famous avant-gardist Man Ray while she continues to prepare to be painted, all the while joshing Lindstrom about his Swedish background.  Soon Solidor insists on Giselle sitting on her lap in an intimate lesbian embrace, giving Lindstom a bit of the jitters.  Gradually, Solidor’s colorful past is raked up, mentioning all of the famous artists she hung out with from the twenties on.

After hearing the song “Les Filles de St. Malo” (Batall/Valandre), a number that Solidor associates with her youth in Brittany, the scene changes, Lindstrom transforms into a Maitre D at the cabaret and Solidor has become her younger self, wandering about the boîte greeting the guests, singing “Les Filles..”  Giselle has morphed into Daisy, joining Solidor and Tamara de Lempicka, the famous painter, discussing in great detail their lesbian sexual escapades, singing “Ouvre” (Ruatten/Haraucourt), an explicit ditty. 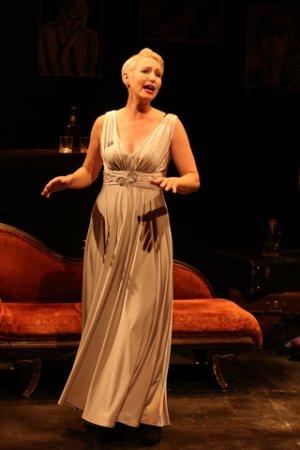 Jessica Walker in a scene from “All I Want Is One Night” (Photo credit: Carol Rosegg)

The play moves fluidly from one period to the next, each with a song appropriate to the era and dramatic situation.  “Escale” (Monnot/Mareze) is about a passionate love affair with a man and “Lilli Marlene” (Schultze/Lemarchand/Leip) takes Solidor into World War II.

Solidor’s love life, almost exclusively with women, is front and center throughout, sometimes shockingly so.  Another theme is how often she was immortalized in painting and photographs by famous artists, all deliciously detailed.

Other characters wander in and out, but the focus remains on Suzy Solidor whose candor and sexuality keeps the play moving along interestingly.  Walker does a remarkable job as an old-fashioned chanteuse and enduring sexual adventurer. 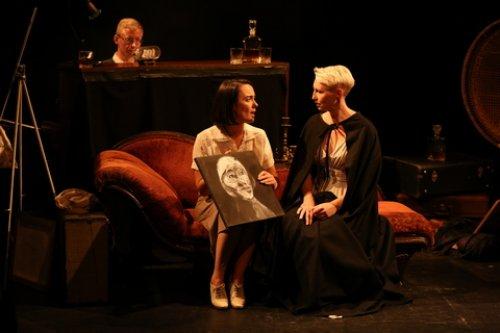 Joseph Atkins, Rachel Austin and Jessica Walker in a scene from “All I Want Is One Night” (Photo credit: Carol Rosegg)

The other two actresses move smoothly from character to character and are convincing and amusing.

Music throughout is provided by Joseph Atkins on the piano and accordion whose technical expertise is on a high level.

Originally directed by Sarah Frankcom, this staging was devised by the cast members.

Running time:  65 minutes with no intermission