Celia Keenan-Bolger and Anita Gillette in a scene from “A Parallelogram” (Photo credit: Joan Marcus)

In 1917, popular playwright Sir James M. Barrie wrote a play called Dear Brutus in which eight people get to relive their lives, only to make the same mistakes all over again. In A Parallelogram, Bruce Norris, Pulitzer Prize-winning author of Clybourne Park, as well as The Qualms and Domesticated, goes a step further in his latest “What if?” play: “If you knew in advance exactly what was going to happen in your life, and how everything was going to turn out, and if you knew you couldn’t do anything to change it, would you still want to go on with your life?”

There are only two possible answers to this question and Norris seems to want to have it both ways. Michael Greif’s assured direction can’t disguise that the endlessly repeated scenes showing alternate possibilities are simply tedious without being profound or meaningful. The cast of four made up of Juan Castano, Celia Keenan-Bolger, Stephen Kunken and Anita Gillette as a time traveler from the future try their hardest but can’t make us care about these thin characters or their problems.

Bee, a 30-year-old Rite-Aid regional manager, bored by her job and her life, has met a woman claiming to be her future self. Is it a hallucination or is this second, older Bee a time traveler from the future? We never know for sure. Bee 2 is able to turn back time for her younger self using a device that looks a lot like a television remote but she calls it a “parallelogram” (parallel time, get it?) but she prefers not to use it as she claims there is nothing Bee can do to change past events to avoid problems. Sometimes other people can see Bee 2 and sometimes they can’t. This is never explained, but must be taken as a given.

Celia Keenan-Bolger and Stephen Kunken in a scene from “A Parallelogram” (Photo credit: Joan Marcus)

Bee is living with Jay, a payroll accounts supervisor and a fairly ordinary guy, who left his wife and two kids for her. When the play begins he is having an argument with her that he smells smoke but she claims she doesn’t smoke. Has she taken up this bad habit? In fact, it is Bee in the future who will be smoking but how is Jay able to smell it in the present? It may all have something to do with the space-time continuum or quantum mechanics but this is never explained satisfactorily in A Parallelogram. Throughout the play an incident in which the eight-year-old Bee was bitten by her pet parrot is recounted. Most likely this is supposed to be an important metaphor but it never comes into focus other than as the kind of traumatic event that one never forgets. While Bee claims to have a social conscience, we never actually see her do anything that would prove it.

JJ, their hunky Latino lawn man, is at work outside their bedroom windows and his presence makes both of them uncomfortable, Bee is attracted to him, while Jay feels threatened. When events start to go wrong, Bee 1 demands that Bee 2 reverse time and let her attempt to correct things. However, just as Bee 2 insists, things still turn out the same way. However, we have to see scene after scene repeated as an experiment, a device which gets old fast. Although Bee 2 warns her younger self that a terrible plague is coming, all Bee 1 worries about is her own petty problems and disappointments. Is Norris saying that knowing the future would not change our outlook and you can only deal with your own life and problems? Here, the characters just seem petty and superficial.

In Act II, at Bee 1’s request Bee 2 has skipped ahead six months into the future. Everything is different but everything is still the same, got it? Gillette as the older Bee back from the past has all the best lines getting the only laughs as she spouts politically incorrect truisms, tells upsetting anecdotes of unpleasant things that happened or will happen, and warns of serious disasters in the future. Periodically addressing the audience while the action on stage freezes, Gillette may just have her best role in a non-musical play in her distinguished career. Unfortunately, the other actors are not so lucky. 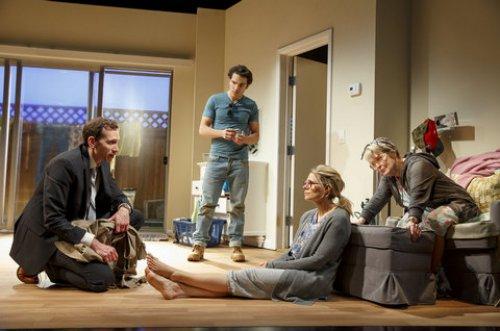 Along with Rachel Hauck’s bland sets, the characters aside from Gillette are basically colorless. As the younger Bee, Keenan-Bolger spends almost of all of her time sitting on the bed in the play’s two locales. While she seems perky and questioning, she brings little to her character’s personality. As written, Jay is unlikeable, argumentative and equally self-involved even though we can see how he believes that Bee is losing her mind. Kunken is very convincing but can do nothing to make him likeable or make us sympathize with him. Castano is often amusing with his tenuous hold on English but his role of JJ is mainly a stereotype and a cliché.

Hauck’s two settings are devoid of personal objects and as generic and antiseptic as the script calls for. However, this adds nothing to the portrait of how these people live – in fact, they seem to be strangers in their own lives. (Is there a message here?) Jeff Mahshie’s contemporary costumes looked lived in but also reveal nothing about the characters. Kenneth Posner’s lighting follows the time freezes of the play bringing back the previous lighting each time. Sounds of a lawnmower engine and “the crackling of some kind of electromagnetic activity” are part of Matt Tierney’s subtle but necessary sound design.

Bruce Norris’ A Parallelogram endeavors to explore some sobering facts about the effect of the future on the present and responsibility to others. Unfortunately, the play ends up being laborious and tiresome – without being revealing or challenging. Too many of the fantasy elements have not been worked out so that much must be taken on faith or not considered. Norris wants to say something deep but this 2010 play having its belated New York premiere is more confused than meaningful.