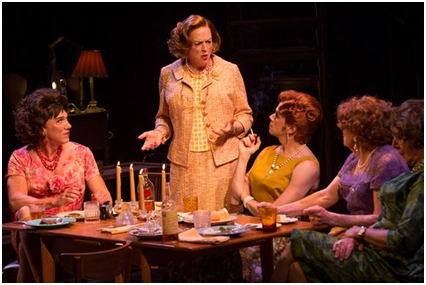 Harvey Fierstein has for many years cornered the market on stage shows about men in drag with Torch Song Trilogy, La Cage aux Folles and Kinky Boots. Now in Casa Valentina, his first new non-musical since 1987, a world premiere being presented by Manhattan Theatre Club in its Broadway venue, he has written a fascinating fact-based play about heterosexual men who like to dress up in women’s clothing. Set at the real Chevalier d’Eon resort in the Catskills in June of 1962, it follows the tumultuous events of one weekend when two new outsiders visit for the first time. The starry and excellent cast includes Patrick Page, John Cullum, Larry Pine, Tom McGowan, Reed Birney and Mare Winningham.

The inspiration for Fierstein’s play was a book of photographs of the 1960’s edited by Michel Hurst and Robert Swope and published in 2005 of the Chevalier d’Eon resort, near Hunter Mountain in the Catskills, where renamed Casa Susanna on various weekends it hosted straight, married men who liked to let out their feminine side in a private setting as they were not generally accepted elsewhere. In Fierstein’s play, it is run by the happily married couple Rita (Winningham) and the very masculine George (Page) who on these weekends becomes the feminine Valentina. But air conditioning has killed the rest of their business and the resort is now bankrupt. For this private weekend of the inner circle (long time visitors), Valentina has invited Charlotte Price (Birney), a writer, pioneer, publisher and activist for the transvestite lifestyle. Although a regular contributor to Charlotte’s magazine, the East Coast Valentina has never met the California-based Charlotte before. Valentina is hoping for a nationwide endorsement from Charlotte which will fill the resort on a regular basis and save it from foreclosure.

However, this weekend Charlotte has a special reason for her visit: she has just incorporated her California “Sorority” as a legally recognized non-profit organization registered with the United States government. She hopes to set up an East Coast chapter with Valentina as its president. The only catch is that the elected officers will be required to provide legal names and addresses – and sign an affidavit stating that they are not homosexual. As most of the visitors are closeted outside of the resort, this proves quite a problem and there is the hint that several of them, though married with children, are also closeted homosexuals. For Charlotte, “once the world sees who we truly are, there will be no need for deception.” 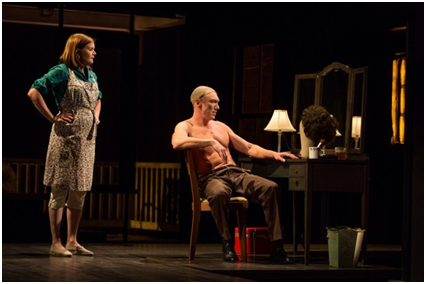 To complicate events this weekend, George has just come back from a meeting at the local Post Office to explain a package that has arrived in care of him to deliver to another – except that the forwarding names have been mutilated. And this is also the weekend that Gloria (Nick Westrate), a regular, has brought her newbie friend Jonathon (Gabriel Ebert), recently newly wed, who wants to let out his alter ego Miranda for the first time. All the while, the understanding Rita is watching over them like the good den mother that she is.

Some of the characters are only seen in the alluring women’s clothing designed by Rita Ryack, while others arrive in their male garb and then are transformed in the course of the first act. Under Joe Mantello’s shrewd and discerning direction, the cast is totally believable in and out of drag. As George/Valentina, Page is a forceful, troubled presence as he negotiates his course through both genders while dealing with his personal troubles. As the celebrity visitor with an agenda of her own, Birney is magnificently insidious, bringing the outside fears into this seemingly private Eden. McGowan is very amusing as a chubby Oscar Wilde-quoting army sergeant Albert/Bessie with a pertinent witticism for everything. Cullum makes a credible elderly “aunt” type, complete with a string of pearls and her dependably self-deprecating remarks.

Winningham brings a compassionate, warm presence to Rita, loving wife to George and dedicated inn keeper to a select clientele. Pine makes a startling first appearance as the New England Judge dressing in his hunting outfit and then again as the closeted Amy. Westrate (seen only in drag) is the one guest who is said to be as pretty a man as she is a woman. One of the funniest scenes is the one in which Ebert as the newly minted and plain “Miranda” gets a make-over by the others using all of the tricks of the trade. Lisa Emery as a family relative puts in a powerful late second act surprise appearance. 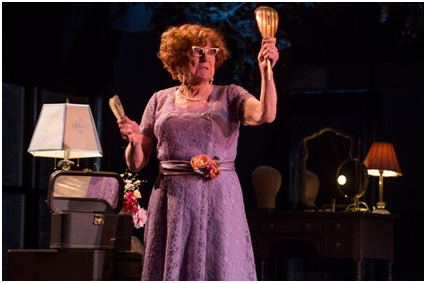 Scott Pask has had the difficult job of creating a single set for the main house of a run-down bungalow colony with porch, dining room, kitchen, staircase, and three visible bedrooms. While the result is serviceable, it is devoid of atmosphere – which may be his way of creating a shabby comfortable locale. Justin Townsend is responsible for the lighting which segues from late afternoon, through evening to the following morning. Aside from Ryack’s impressive array of 1950’s gowns, Jason P. Hayes deserves honorable mention for the remarkable hair, wig and makeup design used to turn these masculine men into believable looking women. The original music and sound design has been the work of Fitz Patton.

Harvey Fierstein’s Casa Valentina is absorbing theater both as a revealing look into a world unknown to most theatergoers as well as a suspenseful new story. If the play has a flaw, it is that its message is a little bit obscure – that the world would be better if we all could be who we want to be or beware friends bearing unwanted gifts? Also the play does not reveal how much of the story is true and how much is invented. Nevertheless, Casa Valentina led by the excellent Patrick Page, Reed Birney and Mare Winningham and piloted by the expert Joe Mantello is a gripping and provocative evening in the theater.