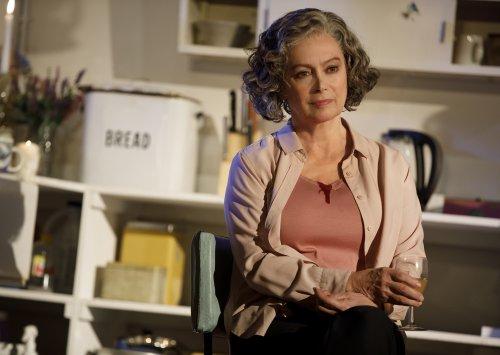 The Manhattan Theatre Club has brought Lucy Kirkwood’s dark puzzle of a play, The Children, to the Samuel J. Friedman Theatre with its original cast and production after a hugely successful run at London’s Royal Court Theatre.

Despite a brilliant display of achingly detailed acting—reason enough for connoisseurs of acting to rush to this production directed by James Macdonald—its uneasy blend of a frightening nuclear apocalypse and an ugly romantic triangle might be an obstacle for some.  The Children is a quiet, whispered scream of a drama that takes viewers by surprise even as the characters bleed and brood.

The Children is saturated in sadness.  The three actors dance around—occasionally, literally dance around—the elephant in the room:  shared guilt for both the recent nuclear plant disaster and earlier sexual transgressions. This proves a sisyphusian effort that ultimately, inevitably, fails with fallout both radioactive and emotional.

Rose (the still beautiful, velvet-voice Francesca Annis) has arrived, a surprise guest, at the dreary cottage of Hazel (Deborah Findlay) and her husband Robin (Ron Cook).  The plain cottage containing just the bare essentials is just outside a radiation exclusion zone created a result of the nuclear power plant accident that caused a tsunami and massive radiation leaks along a wide stretch of the British coast. 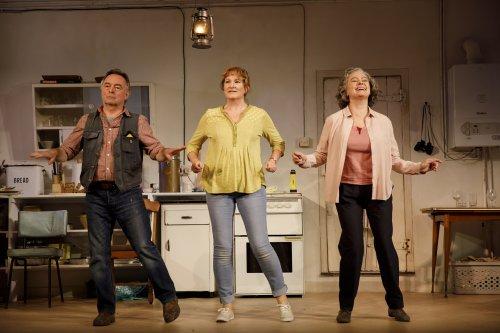 Unpolluted, non-radioactive water has to be imported and the electric grid is unreliable at best.  Animals and plants that grow on the contaminated land have to be avoided.  (A side plot about Robin’s dairy farm drives this home.)

Dripping blood opens and closes the play.  As the play begins, Rose, suffering from a knee-jerk punch from Hazel has a bloody nose; then illness saturates the dreary cottage, coloring it bright red.

Gradually, Kirkwood provides hints of an uneasy history among the three, hints that turn three old friends into seething enemies who eventually, apprehensively, decide to bury their pasts and unite in a heartbreaking final scene. The utter calmness of the three characters as the house symbolically floats in larger and larger waves, belies the earthshaking decisions Rose, Robin and Hazel make. 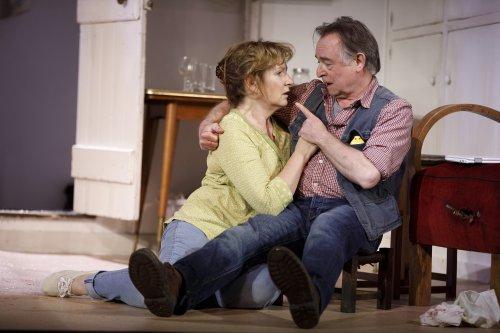 As Rose, the most colorful and well-traveled of the three, Annis moves with grace and speaks with worldly confidence.  Findlay, whose Hazel is the least likeable character, finds a desperate humanity in Hazel’s constant battle against old age and its consequences.  Ron Cook’s Robin is an amazing combination of boy and man, his emotions at the sight of Rose register to the back of the theatre.  All three are terrific.

The house, designed by Miriam Buether, at first appears to float in Peter Mumford’s watery projections and grayish lighting, lost to the rest of the world.  Buether’s costumes help define character, from Rose’s colorful outfit to the drearier outfits of the other two.

The title is both philosophical and realistic, dealing with all children and the offspring of Robin and Hazel.  The director, Macdonald might have paced things better, but the natural, real-time unraveling of the fragile plot has the benefit of spending more time with three theatre veterans. While not household names in the United States, both Francesca Annis (Gertrude) and Ron Cook (Polonius) appeared previously in New York in the Ralph Fiennes Hamlet, and Deborah Findlay appeared Off Broadway in the London transfer of Top Girls as well as in Stanley on Broadway.

Running time:  one hour and 50 minutes with no intermission