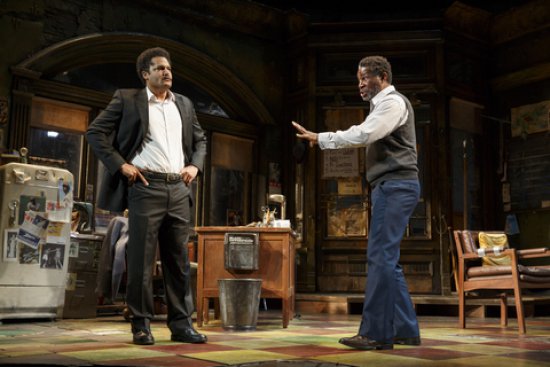 August Wilson’s Jitney has been the only one of the ten plays in his American Century Cycle that has not been seen on Broadway – until now. Manhattan Theatre Club is presenting a magnificent revival of the play originally seen Off Broadway in 2000. With Wilson’s Pulitzer Prize-winning play Fences currently in movie theaters and the Black Lives Matters movement in the news, this play is timely once again.

Director Ruben Santiago-Hudson has himself won a Tony Award for his performance in Wilson’s Seven Guitars and has directed acclaimed Off Broadway revivals of The Piano Lesson and Seven Guitars. He has assembled a cast of nine in which seven of the actors are veterans of Wilson’s play including Anthony Chisholm who appeared in the 2000 production. A true ensemble led by John Douglas Thompson and André Holland (currently in Moonlight), a better staging could not be imagined of this involving and engrossing play.

In The American Century Cycle, Wilson completed ten plays, one for each decade, about the African American experience, nine of which take place in Pittsburgh where he grew up. He is the only American playwright to have finished such a project. Two of the plays, Fences and The Piano Lesson, were awarded the Pulitzer Prize for Drama. Although Wilson celebrates the African American experience, what is so extraordinary about the plays – and may account for part of their success – is that they deal with the human condition and with universal themes: poverty, loneliness, alcoholism, homelessness, love, death.

Jitney, like several other of the plays, is set in in the workplace, the office of a gypsy cab company in 1977 Pittsburgh. Although the play does not have a great deal of plot, by the end of the evening we know all nine characters inside out. Wilson is well-known for his use of language which sounds like urban poetry, and his famous riffs, long monologues for each character almost like arias, are much in evidence and are very revealing. The passions of the men spill over in this serio-comic tale which is ultimately a powerful slice of life. 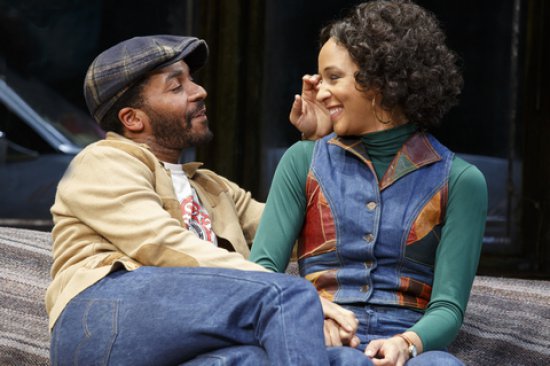 Set in the run-down Hill District, Pittsburgh’s predominantly African American section, set for urban renewal, Becker has for the last 18 years run an illegal jitney car service for the community which is not served by the legitimate cab companies. The men pay a monthly fee and rotate the rides. However, Becker has just received word that all the buildings on the block are to be boarded up in two weeks earmarked for demolition. In his early sixties and with a pension from the mill, should he just shut down or does he have a responsibility to the other men? He is depicted as an upright, noble and heroic man, so that he doesn’t really have a choice.

There are two parallel stories which weave their way through the play. Youngblood (born Darnell), an ambitious veteran from the Vietnam War who is in his twenties, has been seen driving around with Peaches, the sister of his common law wife Rena with whom he has a three year old. Word has gotten back to Rena. Youngblood and Rena have two confrontation scenes which Holland and Carra Patterson play to the hilt.

As a sort of generational flash forward, Becker’s 39-year-old son Clarence (aka Booster), once brimming with promise, is getting out of prison. Becker has not visited him in the 20 years he was incarcerated for killing his white girlfriend who lied about his raping her to save face with her bigoted father. When Booster arrives to make peace with his father, the upright and disappointed Becker tells him exactly what he thinks of his life choices. The explosive scene is as powerful as any in American drama and is a sidebar to a similar one between Troy and Cory in Fences. Thompson, one of our finest classical actors, elevates this scene to the level of King Lear in his grief over the shame his son has brought him, while Booster played by Brandon J. Dirden says volumes with his dark silence.

However, we also get to know all of the other drivers intimately: Chisholm’s Fielding who has become an alcoholic but has had an amazing career in his distant past, Michael Potts’ gossipy Turnbo who believes he is doing a social service by passing along what he has heard, and Keith Randolph Smith’s Doub, a placid Korean war veteran who is as much a peacemaker as an arbiter of ethics. Then there is Shealy, played by Harvy Blanks, the local bookie who takes his bets on the office phone and dresses in the most colorful outfits, as well as Philmore (Ray Anthony Thomas), the hotel doorman who has been thrown out by his wife and is constantly in need of a lift to get to his next bed.

The 2000 production made Jitney seem like a series of vignettes, bits and pieces, that didn’t actually cohere. Under Santiago-Hudson’s direction, Jitney is a great American story of men struggling to make ends meet and live their disparate lives side by side. Not only is the play absorbing, it is both wise and compassionate.

David Gallo, who also created The Second Stage production set in 2000, has redesigned his gypsy cab station giving the play more downstage playing areas. The shabby interior suggests the faded grandeur of a once elegant locale that has seen its day and the view out of the many glass panes gives us a picturesque view of the district. The hill from the previous set is much in evidence but is raked differently.

The pitch perfect costumes by Toni-Leslie James define each of the nine characters based on their different personalities and lifestyles. Bill Sims’ moody original music includes jazz riffs that build in intensity as the play nears its conclusion. The lighting by Jane Cox alternately lights up hidden dark corners of the office or makes them disappear into darkness.

Manhattan Theatre Club, which has co-produced the original New York productions of Wilson’s King Hedley II, Seven Guitars and The Piano Lesson, has done itself proud with its Broadway premiere of Jitney. Ruben Santiago-Hudson’s ensemble cast breathes new life into this play that shows how men live and work, along with their dreams, their hopes and disappointments. With another bravura performance by John Douglas Thompson, as well as fine work from the rest of the ensemble, this is a play that must be seen.